Back in January, I wrote a blog called “5 Award-Winning Authors You Read First in Cricket Magazine.” That blog only touched the tip of the talented iceberg when it comes to the authors who have graced the pages of Cricket, Spider, Ladybug, and Babybug, and it didn’t mention at all the wonderfully talented illustrators discovered by Cricket Art Directors over the years.

No wonder Cricket Media magazines have won the most awards of any children’s magazines in history! So, to follow up, here are 5 illustrators whose art lit up the pages of Cricket magazine and then went on draw pictures and characters beloved by millions. Look for more blogs showcasing other Cricket Media authors and illustrators in the coming months. And, of course, to read the amazing stories and see the beautiful artwork featured in our pages each month, be sure to subscribe to Cricket. There is no knowing who will be the next award-winner discovered right here in the pages of our magazines.

Caldecott-winning artist David Wiesner’s career as an illustrator of children’s books began the day Cricket Art Director Trina Schart Hyman came to the Rhode Island School of Design to speak to the students about being a children’s book illustrator. On a whim, David showed his portfolio to Trina and Trina immediately asked him to do a cover for Cricket. That illustration, “The Giant Cricket Expedition” appeared on the cover of the March 1979 issue. David’s second cover for Cricket, in March 1989, was called “Air Raid.” It was this cover that eventually became the book Tuesday, which won the 1992 Caldecott Medal.

Chris Van Allsburg’s cover illustration for the February 1982 issue, a black and white conté dust and conté pencil drawing of sailboats hovering over the water eventually became part of his beloved book The Wreck of the Zephyr, published in 1983. Chris was introduced to Cricket by another award-winning illustrator, David Macaulay, who also did several covers and interior spreads for the magazine over the years. 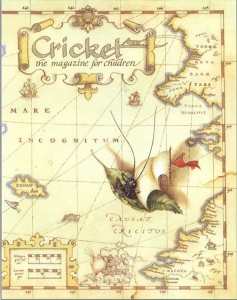 Paul O. Zelinsky received the 1998 Caldecott Medal for his illustrated retelling of Rapunzel, as well as Caldecott Honors for three of his other books. His covers for Cricket include April 1987’s “Hula Cricket” and October 1992’s “Beware, O Cricket”, which was inspired by the 500th anniversary of Columbus’s voyage and is filled with puns for the careful reader.

Tomie dePaola, illustrator of more than 200 books for children and one of the few author/artists to earn both a Caldecott Honor (for his book Strega Nona) and a Newbery Honor (for 26 Fairmount Avenue) met art director Trina Schart Hyman when they were both speaking at the same program in Vermont. The two had dinner before the program began and soon after Trina asked Tomie to do a cover for Cricket. Tomie dePaola’s first cover for Cricket appeared on the May 1983 issue and is titled “The May Basket.” 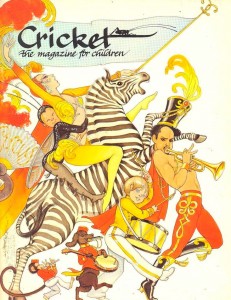 Probably best known for his illustrations of Eloise, the beloved six-year-old character from the children’s book of the same name, Hilary Knight was also a go-to illustration choice for Cricket Art Directors in the 1970s and 1980s. Hilary’s artwork for Cricket first appeared in the third issue of Cricket magazine and his covers include the November 1979 issue, which is titled “The Circus is Coming.” This drawing includes an in-house joke for staff artist Trina Schart Hyman and art director John Grandits: two of the acts advertised are “La Trina, Temptress of the Trapeze” and “Grandits the Great, alone in a cage with a giant gorilla”!