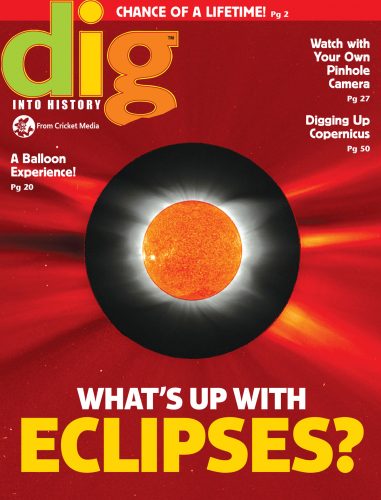 Topics: Magazines, Science
Ages: 9 and Up

ON AUGUST 21, 2017… a most magnificent sight is coming right to our backyard. Many call it the Great American Eclipse because so many millions of Americans will be able to easily access the 70-mile-wide path of the total solar eclipse. Another cool fact is that this eclipse will be the very first, since the founding of our nation in 1776, to visit only the United States and no other country on Earth!

When the proposal for a DIG issue focusing on the solar eclipse of August 2017 came across my desk, I had to really think about it.  It sounded interesting, but it was far from DIG’s usual purview of world history and archaeology. But, I thought, what if I focused on eclipses through history—what the records tell us, who learned to predict them, how they learned to predict them and so on. Before I decided “yes” or “no,” I had to wrap my head around the possibility of such a theme, because such a one had never ever occurred to me. I had done the zodiac, talked about the Chaldaeans, but never an issue with a theme that fit so definitely in the science-astronomy box.

So, off I went into the unknown, researching eclipses, astronomy, scientific inventions back millennia. There was so much—and it was fascinating. Yes, DIG was interested! It would be a great way to link history and archaeology and science! But, then, I thought—archaeology and eclipses, how can I link those two fields. The reply came almost immediately—through the astronomer Copernicus and the astronomer Tycho Brahe! But, I don’t want to give away all—let me just say, that both stories offer positive proof that archaeology and astronomy—eclipses, in this case—do sometimes bring otherwise distant fields together.

I hope you have as much fun reading the January issue of DIG as I had working on it—and wherever you may be on August 21, 2017 to observe the total solar eclipse, I hope you have your copy of DIG with you!