Year One along the Silk Road 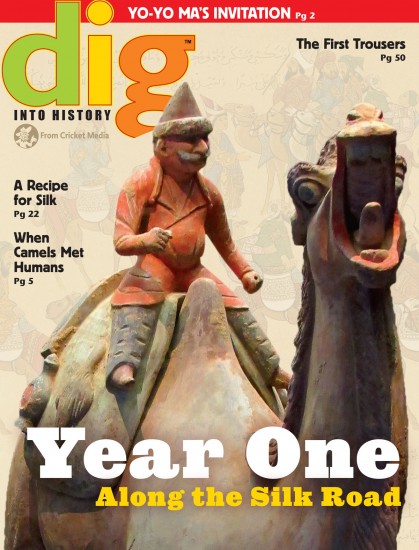 One morning, a few months ago, I was checking my emails as usual, when I saw one from Elizabeth ten Grotenhuis. I had worked with Elizabeth on several issues of Dig in the past and always enjoyed the experience. Elizabeth always had great ideas – this time, she was suggesting a theme for an issue—Year One along the Silk Road! “Let’s talk,” she said, “There’s so much to say on this topic!” I was intrigued, but wary.  The “Year One” was a bit confining, and the Silk Road—well, I had already done other issues on the topics. Still, the concept definitely had me interested. And, once we talked, I was hooked. There were so many possibilities – so many ways to approach the topic that I soon realized I was going to have to choose what to include and that the choices would not be easy ones.

First, I needed something concrete, almost tangible, as my framework. That was easy:  I began to think of the many paths of the Silk Road as books between two book ends—Rome in the West and China in the East. As the Year One is really an arbitrary, human-configured time period, I expanded it a bit to the first century before and after the Year One. There would be exceptions, but that gave me a good time frame. I also decided I would use the abbreviations B.C.E.  (Before the Common Era) and C.E. (Common Era) as they seemed more representative than B.C. and A.D., considering the fact that we were involving a great many cultures, whose roots and beliefs were just as varied. So, with these basics resolved, I began researching just what was going on around the year “Zero.” Well, actually, there was never a year “Zero”! In fact, “zero” wasn’t even a concept then. Amazing – I had never really thought about the switch in time periods and that no allowance had ever been made for zero—we certainly have all made such an allowance in other ways. Just think of your birthdays. We all count our age from zero!

With Elizabeth’s help and guidance, I gradually developed an outline that would clearly—actually pointedly—show the similarities and dissimilarities between the two empires. Soon, I was having to eliminate topics, as we had too many. I wanted variety—a variety that showed how similar people are, regardless of where in the world they lived, and then how dissimilar ideas and ways of living can be. I also wanted the “secrets”! China managed to keep its silk production techniques a secret for centuries; while Rome had managed to maintain its preeminence in glass production. This was amazing – two empires with so much power, yet each had something the other valued highly but could not reproduce. 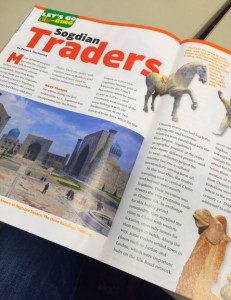 How to incorporate archaeology into the issue for the “Let’s Go Digging” section came next. But, what to do – archaeology and history are so intertwined. Each complements the other, and I always try to have both represented throughout the issue, but now I needed something that was more heavily weighted towards archaeology. I emailed and Skyped with Margarete Pruech in Germany, who writes often for DIG. She has lots of books and papers in her collection, and she suggested topics: the first trousers, Sogdian traders, a Scythian tomb with fragments of lacquered boxes, and remains at the Silk Road city of Jiaohe. Wow –was I excited! These were all topics that I knew readers would find fascinating but had no way to access. And I must mention “Artifacts”—for me, it’s one of my favorites of all time. It’s a little wooden hedgehog that’s about 3.75 inches long and an inch wide. But I don’t want to spoil the suspense! I just want to say that I think it’s sure to become one of your favorite ancient pieces as well!

Have a budding Indiana Jones at home?