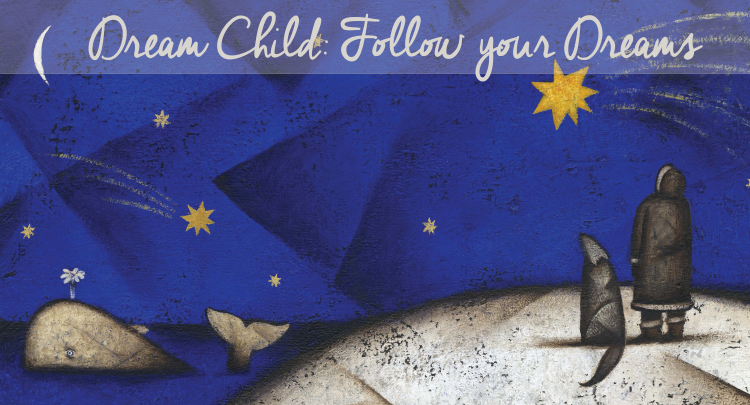 Dream. Dream big, Child. Follow your dreams. They will take you places you once only dreamed about.

It all starts with a first step. A few new steps each day and you are on your way toward your dream.

Don’t be afraid to pursue your dreams. Remember, nothing can keep you from your dreams, but you. The fear of failure is only an illusion. When “No, I can’t” comes knocking, knock him out with “Yes, I can!”

You will learn that failure is only an excuse. It is only a temporary set-back. One step back. Two steps forward. And you are on your way again. Each step is a stepping stone leading the way on the path to success.

Thomas Edison had a dream. He dreamed he would one day invent the light bulb. But each time he tried, he failed. He failed more than one thousand times, but he never gave up. He said he welcomed and accepted all those little failures along the way knowing that each one was simply the next step to his ultimate success in bringing new light to the world.

Success begins the moment that

You set your goal in place;

Take time to savor every step

For life is not a race.

Don’t let the distance to your goals

Keep you from your dreams;

It’s never really quite as far

As what it often seems.

Try to think of all the words

That you could live without;

And throw the worst word out.

It’s not a very easy task,

But don’t give up before you find

The worst bad word is can’t.

[Editor’s Note: Speaking of Thomas Edison, enjoy this overview of just a few of the many inventions he created. This article “A Lifetime of Invention” appeared in the July 2005 issue of COBBLESTONE. Or better yet, get the entire issue about this great inventor and share it with some of the young dreamers in your life.]

Charles Ghigna – Father Goose® lives in a treehouse in the middle of Alabama. He is the author of more than 100 award-winning books from Random House, Disney, Hyperion, Scholastic, Simon & Schuster, Time Inc., Abrams, Boyds Mills Press, Charlesbridge, Capstone, Orca and other publishers, and more than 5000 poems, many of which appear in textbooks and anthologies, and in newspapers and magazines from The New Yorker and Harper’s to Cricket and Highlights. He served as poet-in-residence and chair of creative writing at the Alabama School of Fine Arts, and as a nationally syndicated feature writer for Tribune Media Services. He has spoken at schools, colleges, conferences, libraries, and literary events throughout the U.S. and overseas, and has read his poems at The Library of Congress, The John F. Kennedy Center for the Performing Arts, the American Library in Paris, the American School in Paris, and the International Schools of South America. For more information, please visit his website at FatherGoose.com