Digging Up the Dirt on Roman Africa 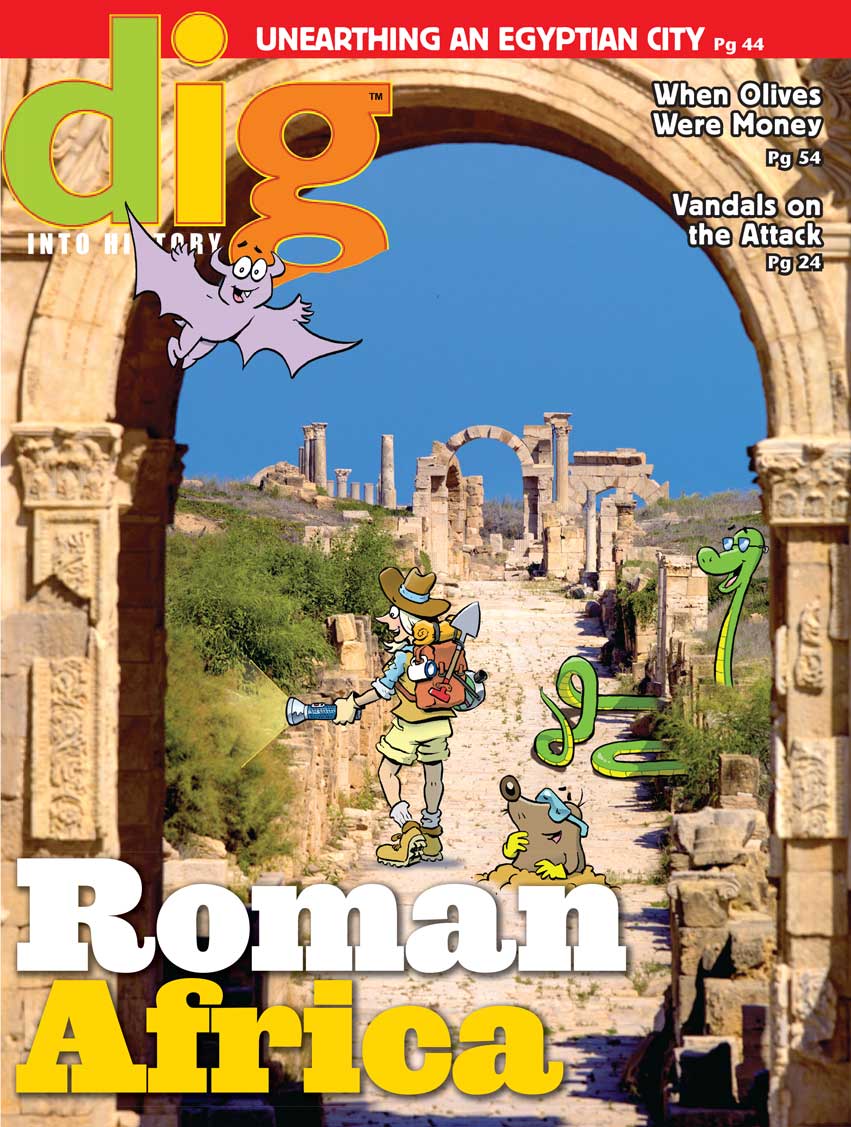 Rome! The Roman Empire! Yes, I wanted to include both in the 2015-2016 theme list, but how to do it was my question. I needed a theme that touched areas I had not in earlier issues. I also wanted a theme that helped readers understand just how Rome expanded—not just that it did expand. A little more thought, and I began to shape an idea—Rome in Africa. That was it – that was a theme that had “lots of legs,” to use a trite phrase.

But wait, I thought. “Rome in Africa” was not a good title for an issue. First, most readers would immediately think Egypt, and only Egypt. I needed a phrase that would be more encompassing, that would tell all that Rome was in more than Egypt. Roman Africa—that was it and Egypt would not be the entry point, Carthage would. I knew the other most familiar historical tidbit about Rome in Africa was Hannibal’s near conquest of Rome. I also knew that the focus of that struggle was on the war elephants and how they were said to have crossed the Alps into Italy. But how many of DIG’s readers would know that Hannibal lost not on Roman land but on his own land in Africa. Now there was my angle, my way to begin the tale of Rome’s entry into Africa.

Yet, I did not want this issue to be just about war and destruction, but more about what Rome did once it controlled Africa. With that thought in mind, the outline for the issue came into focus. We would start with the Punic Wars, then go west to Numidia and introduce a wily ruler named Jugurtha. Not many photos of him, not really much about him. But the ancients did detail his personality and his interaction with some of Rome’s masterful politicians. A play, here, would be good—and illustrated. Then, we needed something about how Rome made North Africa a province. And that would be it for war and conquest.

But there was so much more to tell—the market for a valuable spice known as silphium, the profitable olive tree with its bountiful produce, products shipped throughout the Mediterranean, an author whose tales are still read today. There were also cities whose architectural masterpieces still amaze builders and visitors today. Soon, my problem was not one of finding topics to include, but of cutting and trimming to fit as much as possible in the issue and still make it exciting, engaging, and not overwhelming.

I decided to focus on the baths at Leptis Magna and the amphitheater at El Djem. Even what remains today is majestic. But, as has happened throughout history, nothing lasts forever. As Rome fought for its life against invading Vandals, Roman Africa suffered from neglect. But others were there to fill the void—there was another story: how Roman Africa became a center for the new religion Christianity.

But, what about Egypt? I had forgotten Rome’s most important possession in Africa in my attempt to broaden my audience’s perception of Rome in Africa. Cleopatra was certainly one possibility, but I had focused an entire issue on her already. Then, there were the pharaohs, but I had focused on several as well. So, more research was needed, and as I poked around looking for an interesting site, one that was Egyptian, but also connected to Rome, I hit upon an ancient city named Antinoupolis. It definitely had been a thriving place, it was in Egypt, and it had Roman connections. Actually, it had been founded by a Roman emperor. I emailed a couple of Egyptologists, who had written for DIG in the past and asked about Antinoupolis. They put me in touch with the director. I emailed him, and he immediately said yes—he would do the Let’s Go Digging section on Antinoupolis. I just had to come up with themes for the articles and word counts. What fun I had researching past, present, and future about the area. And I knew that DIG’s readers would find the same thrill as I did, learning about a site that was being excavated right now, that offered a wealth of new information, and that still held many secrets.

That was it – I had my Roman Africa issue and what a great trip I had had putting all together!

Every year, as I draft my theme list, I feel that overwhelming feeling of so much to learn and so much to experience—and that what I know is so very little. I think that is probably one of the greatest thrills of being the editor of DIG, the broadening everyday of “my horizons.”   Who [&h […]