Having a Literally Literary Halloween 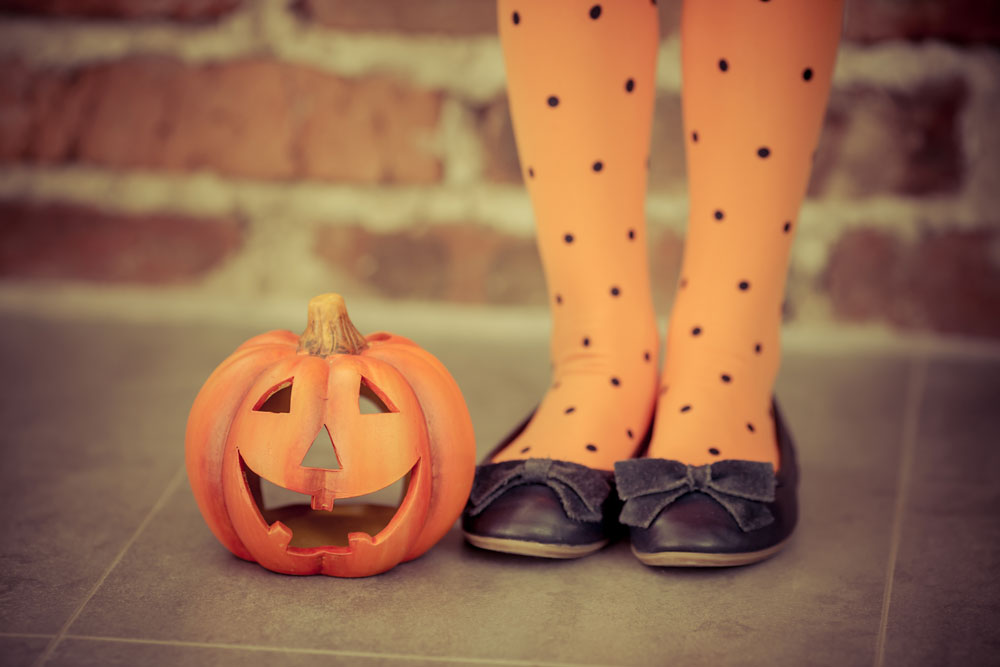 Ahhh, Halloween. One of my favorite holidays: Little effort. Lots of candy.

My kids love it too, mostly for the same reasons. The daughter referred to in previous posts as having the 100-pound book bag (of which 98.5 pounds consist of books she reads for fun) especially loves Halloween — and she has a special tradition. Ever since she was old enough to read her own books, she uses Halloween as a way to celebrate her favorite literary characters by dressing up as them. The problem here is that not everyone has read the same books she has. So I had some trepidation about her costume ideas, worried that her feelings would be hurt if she put a lot of thought and work into a costume that went unrecognized.

What I failed to take into consideration was that this is also the spotlight-loving, know-it-all daughter. Rather than getting discouraged or hurt that no one “gets” her costumes, she used it as an opportunity to educate the masses. Those who were too naïve to know whom she was portraying — who guessed wrong, or worse, who asked “and what are you supposed to be?” — got inundated with a highly-detailed lecture about the book, the character, the story, why this person should read the book, and more.

On the one hand, I’m exceptionally proud of her for seeing this as an opportunity to share her love of literacy, and encouraging others to read. On the other hand, as every minute ticks by where she explains the entire backstory of her character, I can’t help but think about all the candy we’re (uh, she’s) missing out on with these lengthy explanations.

The point of this whole post is to not only confess that, yes, I steal my children’s Halloween candy, but to also encourage you to let your kids choose their own path on Halloween. If they request something with a seemingly impossible costume, task them with helping you design it or finding the right components. If they choose something that no one will else will know, empower them to explain who they are and why the costume matters. Don’t discourage their ideas — this year’s costume might help them build creative skills, delve deeper into a favorite realm of knowledge, or find new areas of interest.

This year, my daughter decided to go a little more mainstream and plans to dress as Katniss Everdeen. Further, for first time since she was born, she has requested that Halloween be a family event. I was ordered to dress as Effie Trinket (I’ve been practicing my best posh accent with “May the odds be ever in your favor”), and it was deemed dad will be Haymitch Abernathy (this was an easy sell on my daughter’s part. Dad: “I don’t want to dress up.” Daughter: “You don’t have to dress up, you just have to be drunk.” Dad: “Okay, I’m in.”). While I’m touched by the invitation to participate in this sacred holiday with her, I’m more excited by the prospect that we’ll at least double the number of households we are able to hit up for candy without the need to explain who she is to everyone she meets.

Since Halloween falls on a Saturday this year, you’ll have the whole day to get through before Trick-Or-Treating begins. So why not settle down and chill out for a bit with this fun for Halloween story for the whole family all about using imagination to create the perfect costume. 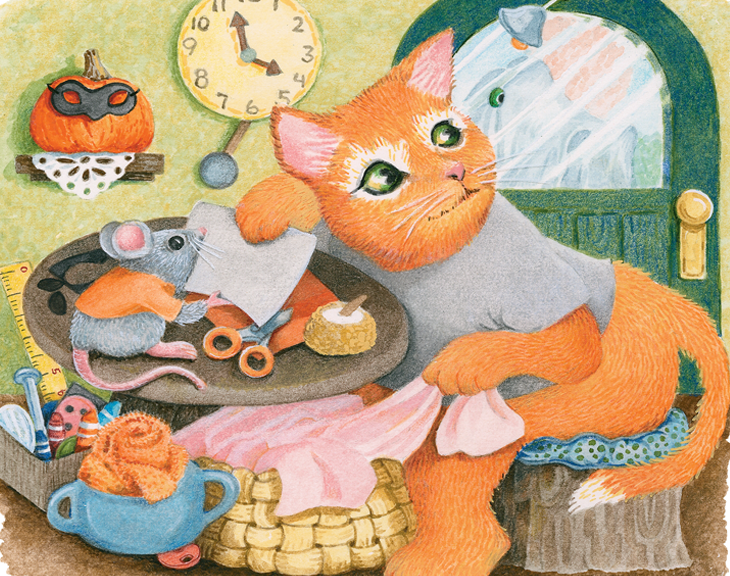 Cat and Mouse sat in Cat’s house talking about what costumes to make for Alligator’s Halloween party. They had a big pile of arts and crafts supplies. . . but no big ideas.

Ding-dong! The doorbell rang. The friends jumped up and hurried to answer it. As Cat opened the door, a ghost on the front steps yelled, “Boo!”

Cat glanced at the scaly feet peeking out from under the ghost’s flowing sheet. “Hello, Alligator,” he said.

“I couldn’t wait to show you what I’m wearing for my party,” said Alligator. 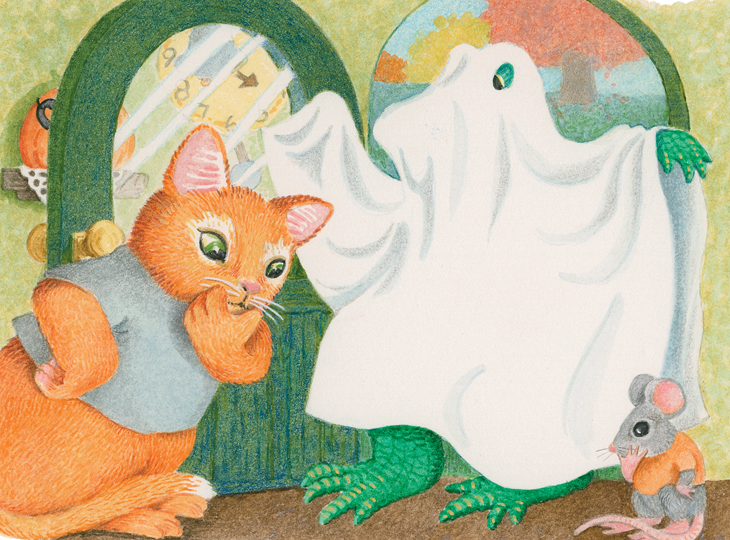 “Thanks,” said Alligator, “but I’ve got to dip some candy apples. See you both soon. Whoooo!” And the green-footed ghost ran away.

In a box of odds and ends, Mouse found a large silver button. “I’ll make a knight costume!” he said. “This button is the perfect size for my shield.”

The doorbell rang again. This time the visitor was Raccoon. He wore cardboard armor and carried a wooden shield. 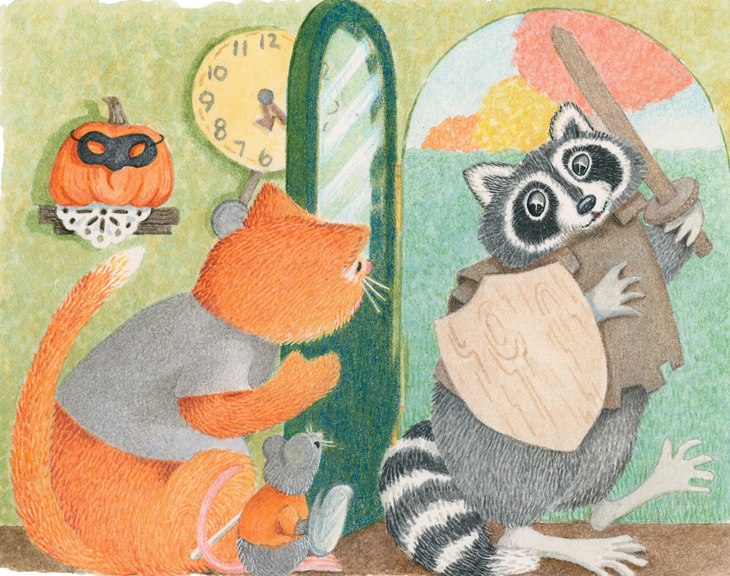 “Hi, Cat and Mouse,” said Raccoon. “Alligator told me you were here. I stopped by so you could see my knight costume for the party.”

“Well, I should go. I still have to paint my shield silver. See you later at Alligator’s.”

Raccoon marched away, holding his shield high. In an even smaller voice than usual, Mouse said to Cat, “I guess I won’t be a knight.” 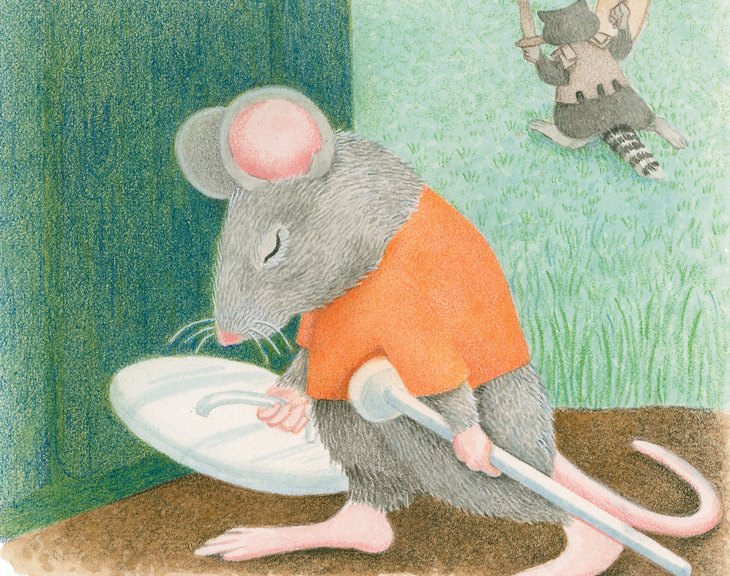 Cat twitched his ears and whiskers, trying to cheer his friend up with a funny face. But Mouse just stared at him.

Mouse’s little round eyes grew rounder. He said, “Cat, I have a big idea.” 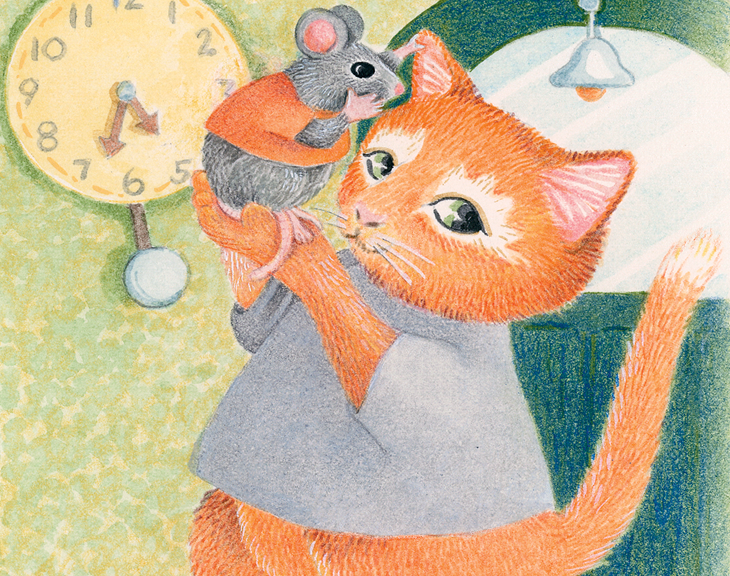 After Mouse shared his plan, Cat cried, “Hooray! This is something completely different.”

Soon they were hard at work. Cat snatched up the sheet, saying, “I’ll wrap a piece of this around my tail to hide the fur.”

Mouse grabbed a ruler and measured out a strip of fuzzy cloth. “And I’ll tie this to my tail to make it look furry.”

“Now for our ears,” said Cat. “Here’s orange paper for you, and gray paper for me.” 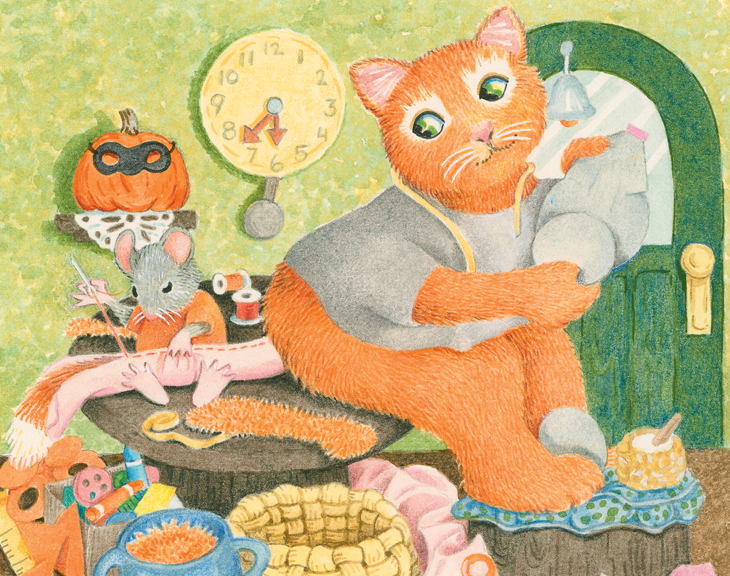 Cat traced big circles on his paper, and cut them out. Mouse cut out small triangles.

They put on their costumes just in time, and rushed off to Alligator’s house. When they joined the party, everyone laughed.

“A tiny Cat and a giant Mouse have arrived,” said Alligator.

“You really do look like each other,” said Raccoon. “Great costumes, Cat and Mouse!” 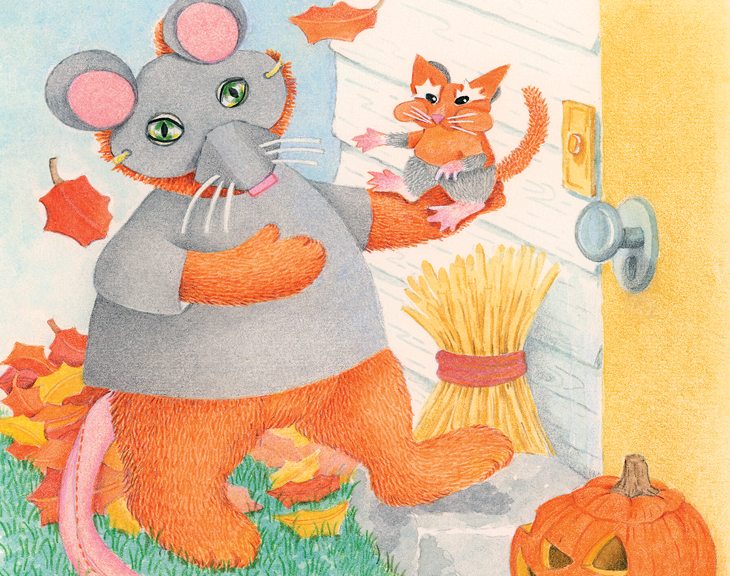 Cricket Media Mom does NOT need to go out and buy more Halloween candy after eating the two bags she bought to give out to trick-or-treaters. Nope. Didn’t happen. On a totally unrelated note, I’ll be right back.

Halloween season is in full swing and ghosts, witches, zombies, monsters, and other scary creatures are everywhere. It seems like no matter where you go you are bound to see spooky decorations adorning store windows and private houses, grotesque costumes on display, and scary stories in the “featu […]

4 Tips for Getting Teens Excited About Reading

I’m pretty lucky as a mom. My daughter loves to read. My husband pointed out today that her book-bag weighs 50 pounds. There are exactly two spiral notebooks in it. The other 49.5 pounds come from books she’s reading for pleasure.   I was a big reader as a kid, so it makes me happy [… […]

Get Out There and BOO Someone!

All around my neighborhood, kids are getting BOOed. Don’t worry, this isn’t the kind of BOOing that ends in tears or hurt feelings. This type of BOOing is actually a good thing. In this case BOOing is when one family leaves an anonymous treat for another family in their neighborhood and directs […]