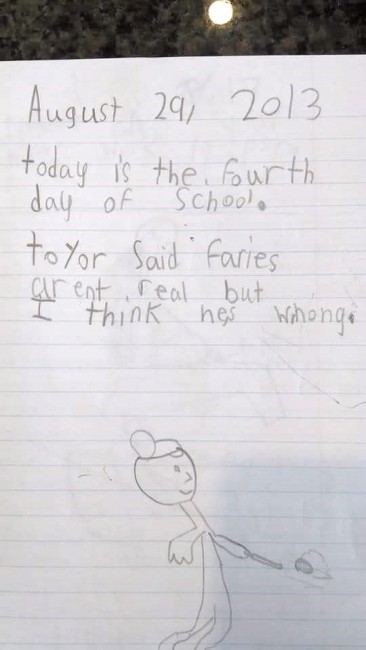 There is only a very short time in a child’s life when he or she really believes in Santa, the Tooth Fairy, Dragons, Elves, and other mythical creatures. So when I saw this little journal entry in my daughter’s notebook, I wondered: How can I keep her believing in fairies as long as possible (no matter what the more-worldly Taylor has to say about it)? 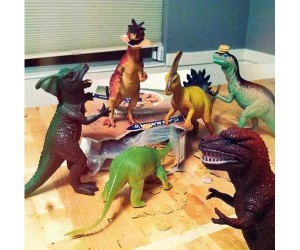 Some parents have taken really complicate steps to bring a little wonder into their kids’ lives. I love the stories of people using the “Elf on a Shelf” to make Christmas even more magical. And how cool are these parents for using dinosaurs to inspire their children’s imaginations.

So how can I help my daughter keep her sense of wonder alive? From what I can tell, inspiring a child’s imagination begins with stories that seem so real that they could actually happen. These types of stories are usually set in contemporary times and locations that are easy to relate to and involve events that seem plausible. This is exactly the appeal of Harry Potter. Harry is so contemporary and his world is so vivid that it is easy to think that you could go down to King’s Cross Station, find Platform 9¾ and be off to Hogwarts. Another story that kept my daughter’s belief in fairies alive is Kate DiCamillo’s The Magician’s Elephant. Could a magician really make an elephant fall through the roof of an opera house? My daughter sure believes he could.

Another safe haven for my daughter’s imagination is Cricket’s Chatterbox. I’ve written previously about how this online writing forum allows kids to develop stories, create characters, and build new worlds. The kids on this forum have imaginations that know no bounds and that in itself is enough to keep the idea of dragons and elves and unicorns alive.

Finally, Cricket magazine itself features a fantasy story virtually every month. I love knowing that when she opens her issue of Cricket, there will be some sort of fantasy and wonder waiting for her. And even if she is in the middle of book set firmly in the here and now, there is always time slip in a bit of magic that comes in the mail.