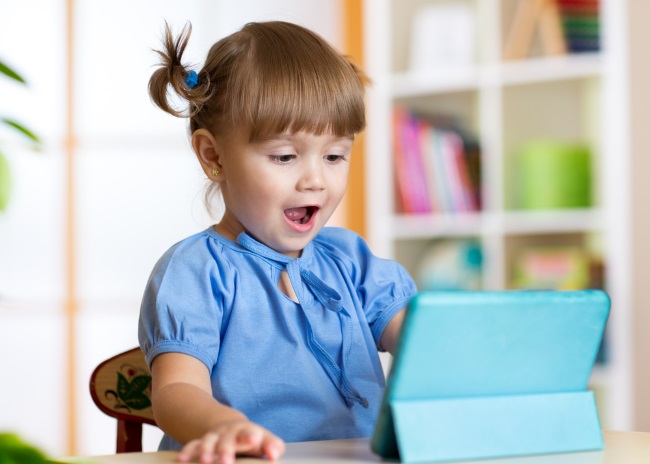 When I was pregnant and took a tour of my daughter’s future daycare, I wasn’t surprised to see a computer lab called “Tech Town.” I assumed Tech Town was for the older kids, since the school went up to kindergarten, so I was surprised to find out that weekly trips to the computer lab began at age two.

That seemed nuts. Was that safe? Healthy? Could it hurt their eyes? What could a two-year-old possibly get out of a computer? What if the kids stumbled upon something inappropriate or gross or scary?

It was like I suddenly turned into my grandmother, fearful about children and the unknown dangers of (shudder) WATCHING THOSE NEW FANGLED TELEVISION SETS.

So I did what all good parents do when it comes to questions about how to raise their kids: I turned to the Internet. There, unsurprisingly, I found an enormous amount of conflicting theories.

There are advocates who say introducing children to computers at an early age will give them an intellectual advantage by teaching problem-solving skills, increase hand-eye coordination, and stimulating their young, hungry minds. A UK site study found that children who had five years of experience using computers by the time they entered elementary school were more likely to excel in mathematics.

Proponents believe two is an ideal age to start because toddlers have the attention span and hand-eye coordination necessary to understand the mouse and its relation to the arrow on screen. Kids at this age can grasp concepts being introduced by simple computer games and graphics. They enjoy the visual and audio stimulation provided by brightly colored images and the clicking of the mouse. Many games and activities are aimed at the two-year-old age range with the intent of not only providing entertainment, but also giving them a jump-start on early skills like colors, the alphabet, vocabulary, and even second languages.

Critics, on the other hand, point out that you don’t have to use a computer to teach children the same skills. A major concern, and one folks still have with the (now) old fashioned-television set, is that children might develop an over-reliance on the computer, which can lead to long-term problems such as impaired social skills or physical effects like obesity. A more global concern is the limited sensory stimulation experienced by young children using computers.

Children’s brains are designed to develop best when stimulation comes through movement, touch, smell, and even taste, as well as vision and hearing.

Here’s my take: As with television, it sounds like the solution lies with moderation. If your toddler seems interested, let him or her play around on a computer or tablet with supervision. There are lots of really fun and excellent sites out there geared for younger kids. Make sure you set limits from an early age so kids don’t feel like the computer is a toy they are entitled to use whenever they want or rely on it as a fallback option just because they are bored. Just like you might set television watching limits, start implementing computer rules such as what sites they can visit, who needs to be there when they go online, and a daily time limit for computer use.

If you need help defining these limits, experts at the UCLA Health System and the American Academy of Pediatrics recommend an upper limit of one to two hours per day total use of TV and computers together for young children. Sites like healthychildren.org also provide recommendations for both TV viewing and Internet use.

And as you introduce them to the computer, encourage a healthy balance with traditional learning toys to give them the hands-on, sensory experience the computer lacks. For example, after your child plays a few games of Ant Parade, which helps kids learn to count using animated brightly colored animated insects, take him outside and have him count real ants.

When your child reads or listens to a story on the television or the computer, make sure you spend the same amount of time (or more!) reading aloud to him so that he gets the stimulation of being able to ask questions, to point out the parts that interest him, and understand that reading is enjoyable and important. (For more about the benefits of reading to young children, read our blog post.) Babybug, Ladybug, and Click magazines are written specifically for young children and are a perfect foil to the electronics that invade our lives every day.

Cricket Media Mama has ordered her entire family to turn off their electronics in an attempt to go back in time 10 years. Wish her luck.

STEM is SySTEMic!   Cricket Media is giving away a BB-8 Droid, the hottest toy of the holiday season to showcase our focus on robotics and engineering in our discovery family of magazines, including Click for children ages 3 to 6 years, Ask for kids ages 6 to 9 years, and Muse for kids 9 [&hell […]