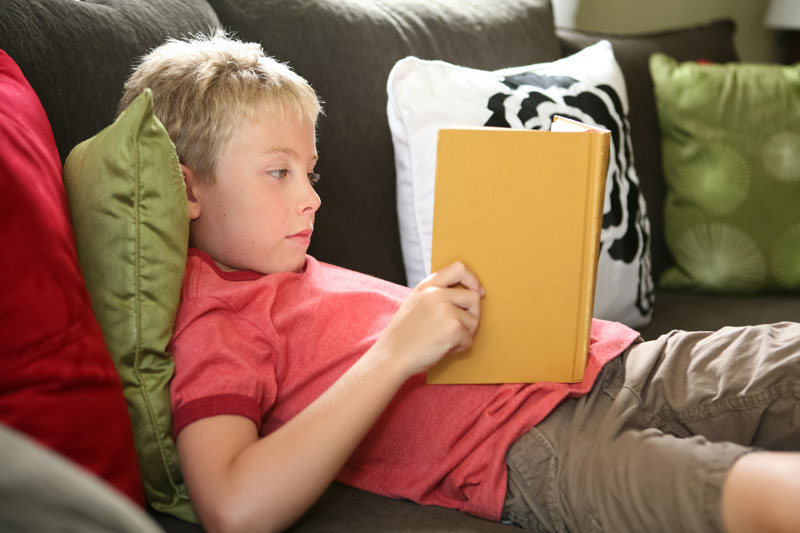 The title of this blog comes from a line in a story my 9-year-old daughter wrote recently. It’s funny, right? My daughter is not so good with capital letters or commas or periods (not yet, at least), but she does have a way with language that gives me great hope that she will be a good writer someday. As a writer myself, that makes me happy, but as a person who spends many hours reading poorly written stories, emails, blogs, texts, and other correspondence, I realize how important good writing is and will continue to be in this digital age where no one wants to answer their phone.

As a writing teacher, I often get asked: “How can I improve my writing?” Or “How can I help my child improve his/her writing?” The answer is three-fold and probably not all that surprising:

In my experience, getting children to read good literature is actually more difficult than getting them to write a story or take suggestions. Is this as surprising to you as it was to me? There is just so much intentional mediocrity out there in children’s literature that picking up something good is not always an option. By “intentional mediocrity”, I mean that the stories are purposefully similar to each other and contain very few new words or concepts (Like these Rainbow Magic Fairy books my daughter loved) in an attempt to get kids practicing the skills associated with reading instead of expanding their world through literature. Don’t get me wrong, I am thankful for the Fairies and other books of this ilk. She picked them up, she read them, she gained key literacy skills that will serve her well. But they are not literature. They are not inspiring. They did not make her want to write her own stories or help her understand the world in a universal way.

Luckily, even as my daughter was reading Rainbow Fairies, she was also reading Spider Magazine. Here was an easy place to find the quality literature that inspired her to write her own stories. Below, you will find one such story. The Last Bicycle appeared in the July 2012 issue of Spider. It is literature that has the power to touch your heart and bring tears to your eyes. I hope you will share it with the young writer in your life. Perhaps it will inspire you both to give the world your best writing. For more stories like this one, be sure to subscribe to Spider. 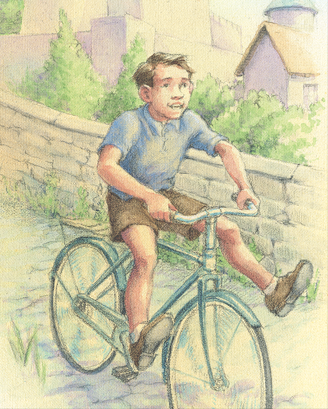 JACQUES COULDN’T KEEP from grinning as he rode his bicycle along the cobblestone road, past the old castle, and down to the town square. From a mile away he could hear singing and cheering as the townsfolk celebrated the end of Hitler’s war. That day, August 26, 1944, Charles de Gaulle marched triumphantly into Paris, and the proud song of La Marseillaise lifted millions of hearts.

Jacques not only grinned for France, but also because he had found the last bicycle in town.

His friends stopped in their tracks when they saw his bicycle. “Hey, Jacques, where’d you get that bike?”

Jacques felt a lump in his throat. Then he squeezed out the words, “My brother Philippe hid it really well.”

The boys fell quiet. Pierre, one of Jacques’s schoolmates, said at last, “It sure is a beautiful bike.”

The boys clamored. “Me, me!” “Let me ride it, Jacques!”
After they all took turns, Pierre offered, “I’ll pay ten francs for it!”

Jacques laughed. “It’s not for sale.” The bicycle was priceless beyond measure.

Almost nothing was for sale in Uzaire, not bicycles or cars or fuel—only secondhand clothes and rusty tools. Food was scarce. Edgy, wary of danger, people emerged from their stone cottages and scattered farms, getting used to a world without constant fear. A few shops and an inn opened. Trains ran, carrying mostly troops.

But no one forgot the awfulness of war, especially Jacques. Four years earlier, Philippe had told him, “I heard that in Chinon the enemy torched the buildings and smashed whatever was left. They’ll come here next.”

Jacques’s family hid what they could in the rubble of the old castle. Jacques and Philippe stashed the bicycle up in the tower. The enemy raided the castle soon after; the bicycle survived. But Philippe—kind, handsome Philippe—went to war for his beloved France and didn’t return. For Jacques nothing would ever be the same, though now he could finally once more breathe the air of freedom.

One morning he pedaled along past the vineyards, the scent of newly replanted grapes on the breeze. The French countryside was coming alive.
He turned onto the paved highway that led to Paris. Ahead, he saw a man in soldier’s clothing.

Jacques’s stomach tightened. Recently, there had been rumors that enemy spies still hid in the countryside. Jacques again tasted the bitterness of fear. The uniform, dusty and worn, was not French. 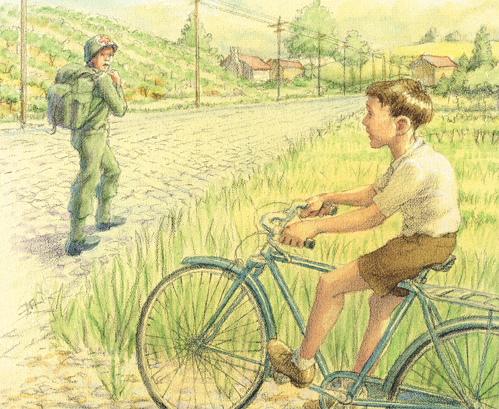 The stranger’s shoulders, hunched under a heavy backpack, straightened as he turned and stared at Jacques, then at the bicycle—Philippe’s bicycle. Jacques gripped the handlebars until his knuckles turned white.

Jacques was relieved. “You’re an American! Why are you still here?”

“I stayed behind to treat small children. I’m an army doctor.”

“You care for the French as well as Americans?” Jacques asked.

“Of course. There’s been an outbreak of scarlet fever.” Jacques could see the exhaustion on the man’s face. “I’ve just come from the train station. I missed the last train to Paris. And now I might lose my place on the ship that will take me back to America.” His shoulders drooped. “You see, my father is very ill. I must get home.” Then, a hopeful spark lit up his eyes. “May I borrow your bicycle, son?”

“Borrow? I’d never get it back.” The man pulled a gun from his backpack. Jacques drew back.

“I’ll give you anything. This gun is valuable. I’ll trade it for the bicycle.”

Jacques shook his head. No guns.

But Jacques saw the desperation in the man’s eyes. He remembered that
American boys had died alongside Philippe. America helped liberate
France. But—Philippe’s bicycle! Did Jacques owe it to this man?

Jacques slowly relaxed his grip. Then, as if it had a life of its own, the bicycle was suddenly in the hands of the American.

“You’ll not be sorry, I promise. I’ll send you an even nicer bicycle from Texas.” The American looked at the identification on the handlebars.

“Thank you, Philippe Dupont. With all my heart, I thank you,” he said as he jumped on the bicycle, pedaling away.

“My name is Jacques!” the boy called after him. The doctor turned back and nodded. Jacques watched him grow smaller and smaller as he cycled up the road.

When his friends heard what Jacques had done, they yelled at him. “Jacques, you’re crazy! You gave away the last bicycle in town!”

Day after day, month after month, Jacques waited for the promised bicycle. Always, the stationmaster shook his head.

Slowly, Uzaire found its way back to an orderly life. Trains once again arrived on time. Food, clothes, books, even an old car could be bought. But
no bicycles.

Then, one spring day when the fields were blooming with the fleurs de colza that looked like sunshine, Jacques heard the whistle of a train. As he walked by the station, the stationmaster called out, “Vien vite! Jacques, come look!” 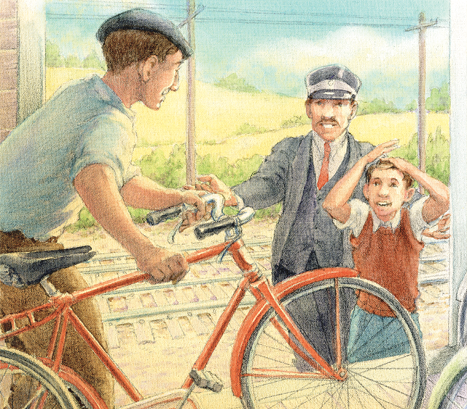 When Jacques saw the shiny new bicycle, he felt joy bursting inside him. He had been right to trust the doctor! With his hands on the handlebars, he grinned and claimed his prize. Ready to zoom away, he put his foot on a pedal.

But the stationmaster stopped him. “Wait, Jacques, you must sign
for the rest.”

“The rest?” Jacques scratched his head in puzzlement.

“Yes, indeed,” the stationmaster said, handing Jacques an official paper to sign. He gestured for Jacques to follow him toward the boxcar, joined by the assistant stationmaster and ticket clerk.

Then Jacques’s jaw dropped, as the men began unloading ninety-nine shiny new bicycles from the train!

The stationmaster handed Jacques a note.

For you and your friends in Uzaire. A hundred thanks. 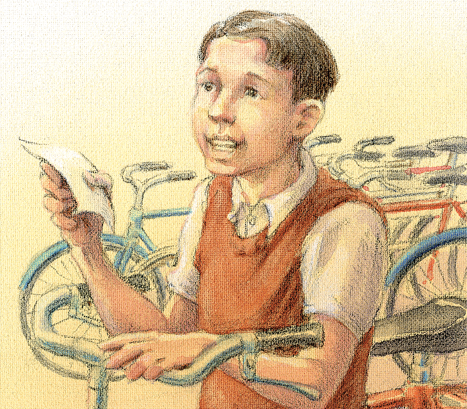 Look around outside. What do you see? A bird? A flower? A sunset? A tree? Each one would make a great haiku — for you!   The Japanese haiku, one of the oldest forms of poetry, teaches us much about the art and craft of poem-making. The entire poem consists of only three short lines, [… […]

Want to write a poem, a story, a memoir? Need a jump start on some new inspiration? Try surrounding yourself with something new. Change is good. The Muse loves change. Turn off the computer and TV. Put away the iPhone. Go out to eat. Go to a live play or concert. Attend a sporting event. […]