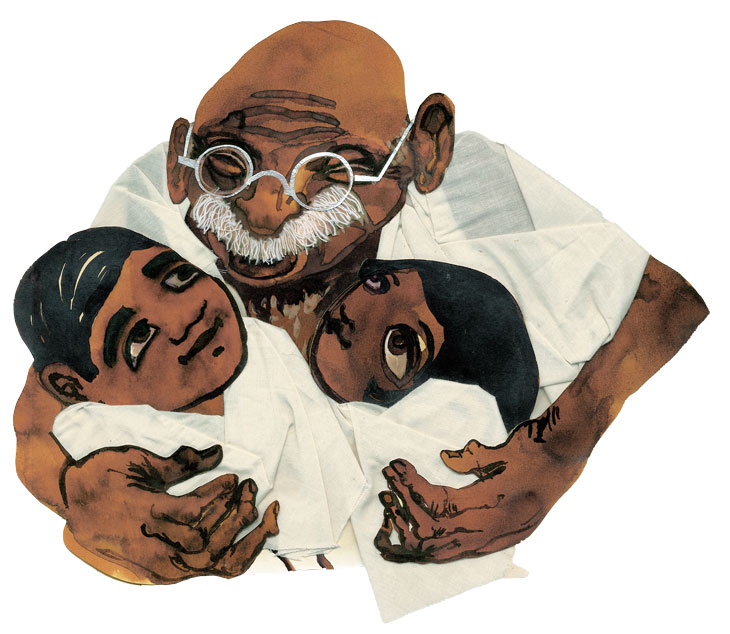 “Happiness is when what you think, what you say, and what you do are in harmony.”
Mahatma Gandhi

Mahatma Gandhi was a great leader who worked to free India from British rule in the 1930s. Gandhi taught a new way of fighting— without violence. He and his followers simply refused to obey unjust laws. If they were arrested or beaten, they did not strike back or attack British people. They stood firm, but were always peaceful. This helped convince everyone, even the British, the laws had to change. India finally won its independence in 1947. Gandhi’s success inspired Martin Luther King Jr. and many other civil rights movements around the world to use nonviolent protest to change unfair laws. Gandhi believed in simplicity and self-reliance. He even spun his own cloth.

In honor of Mahatma Gandhi’s quest to spread peace and kindness and Random Acts of Kindness Day, we are pleased to present this true story of one summer when his grandson Arun came to visit that appeared in a previous issue of Ask magazine.

When we arrived at Sevagram in India, Grandfather Gandhi gathered us to him in a big hug. He smelled of peanut oil.

Grandfather stood and smiled his toothless grin. “That walk is a test of character. I am impressed.” My heart swelled as big as a balloon. I had made Grandfather proud.

Sevagram was filled with people. That evening I ate spoonful after spoonful of boiled pumpkin. It was mushy and bland, but what I liked less was sharing Grandfather with the 350 other people who lived there.

The air was so thick and hot, we slept under the stars to keep cool. I tossed and turned, wondering what the next day would bring. The next day, everyone awoke at 4 a.m. With the dark of early morning wrapped around us, we prayed. Silence filled the air. Everyone was still, but I was fidgety. The peace of prayer felt far away.

I was glad when the sky turned the deep orange of a tangerine. It was time for chores. My sister Ela headed off with Mother to wash vegetables. Father went with his team to clean the toilet buckets that needed to be emptied, washed, and put back for use. My cousin Kanu and I went off to weed the garden. And Grandfather, he worked too, sweeping the floors of the mud huts. 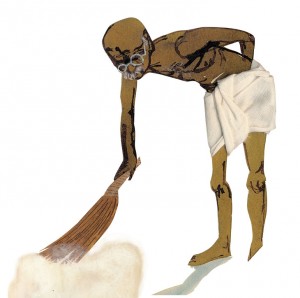 After chores it was time for lessons. I met Bhanasalika, my tutor. “We have much work to do” he said. I stared at my sandaled feet.

At home I spent my time playing cowboys, like in the movies. But here at Sevagram, there would be no movies. There wasn’t even electricity.

I tried to get the other kids to play bank robbers and sheriff, but the only game anyone was interested in was soccer, which ended up being OK. I was good at soccer, better than I was at lessons.

For most of the day, Grandfather worked in his hut. I’d run a stick along the fence post outside, waiting for some time with him, but I was always shooed away. Idleness was not allowed. 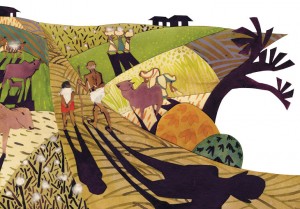 Then one day Grandfather came to find me. “Will you walk with me?” he asked. This morning there was no one else along. Lucky me!

I set off after Grandfather. His stride was quick, and each time he raised his walking stick, he asked me a question. He asked how my sister Ela was behaving, and about life in South Africa, where I lived, and the cruelty that came with blacks and whites being separated by race.

Eventually Grandfather asked about me. “How are you finding life here at Sevagram?”

“The other kids tease me, and my tutor thinks I am useless,” I blurted out. “I try hard, but it is not enough.”

I stopped short of saying that I didn’t feel like a Gandhi, that peace and stillness did not come easily to me.

Grandfather listened, and when I finished, he wiped his spectacles, put them back on, and looked me in the eye. “Give it time, Arun. You will adjust and go on to good things. I have faith.”

He said no more. We walked on. It wasn’t long before someone came to find Grandfather.

I should have known—there were more important things than me.

The rest of the day was just as disappointing. My pencil nub shrank to almost nothing, but we weren’t supposed to waste, so I couldn’t throw it away. I held it, squishing my fingers. My hand cramped. Stupid pencil!

After lessons, with the sun high overhead, I was glad to head to the soccer field. We played hard, as if the match really mattered. I was about to make a goal when Suman, an older boy, shoved me. His feet stole the ball as I lurched forward and fell face down in the dirt. Blood trickled from my lip. It tasted like tin.

I snatched a rock and leaped up. “You did that on purpose!” I shouted. “Didn’t you?” 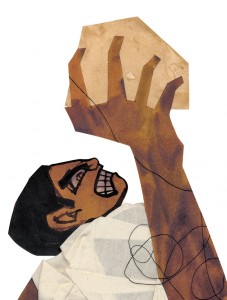 Kanu stepped forward. “It was an accident, Arun,” my cousin said. “Calm down.”

But I didn’t want to calm down. I wanted to throw the rock, to hit Suman, like he hit me. Everyone stared—I dropped the rock and ran . . . straight to Grandfather’s hut. “Bapuji,” I cried.

Grandfather set down his pen and pushed aside his many papers. It was wrong to come here. Grandfather had work to do, important work. I backed up to leave, and Grandfather bowed. “Namaste,” he said—not to me, but to the aide, politely dismissing him. And then we were alone.

“Tell me what has you so upset,” he said. I did. Out came what had happened on the soccer field, getting pushed, the rock, everything.

When I was done, my head throbbed. Grandfather didn’t need to say it. I’d never live up to the Mahatma. I’d never be at peace.

“Do you think Suman and Kanu never get angry? Or that they never think injustices happen solely to them?” Grandfather wiped my tears. “Do not be ashamed, we all feel anger.”

But that wasn’t possible. Suman and Kanu, maybe, but not Grandfather.

“Even me,” said Grandfather.

But Grandfather taught peace. I’d never seen him angry, not even now when I told him what I’d almost done. 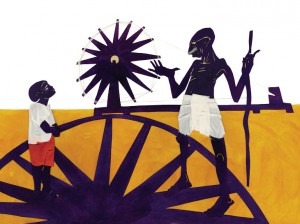 “Let us spin,” he said, and he sat before one of two spindles.

Grandfather wasn’t one for riddles, Father had often told me, but he was one for stories. One was coming, I was sure of it. I held the thin cotton thread between my thumb and forefinger, not moving, as Grandfather’s fingers went to work.

“Have I not told you how anger is like electricity?”

I shook my head. 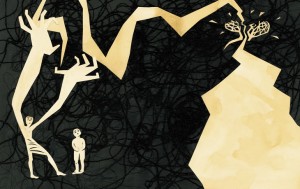 “It is. Anger can strike, like lightning, and split a living tree in two,” he said.

I saw myself on the soccer field, rock in hand, ready to strike.

I saw the movie cowboys and their guns.

“Or it can be channeled, transformed. A switch can be flipped, and it can shed a light like a lamp.”

I saw Grandfather, speaking before thousands. When Grandfather was angry, he didn’t lash out. He worked to make changes, lasting changes, for all—not just for himself.

“Then anger can illuminate. It can turn the darkness into light,” Grandfather said.

“That’s what you do,” I said quietly, sure I couldn’t do the same.

“Arun, we can all work to use our anger, instead of letting it use us.”

But I did choose, and would choose, over and over, from that moment on, like Grandfather . . . I did my best to live my life as light.