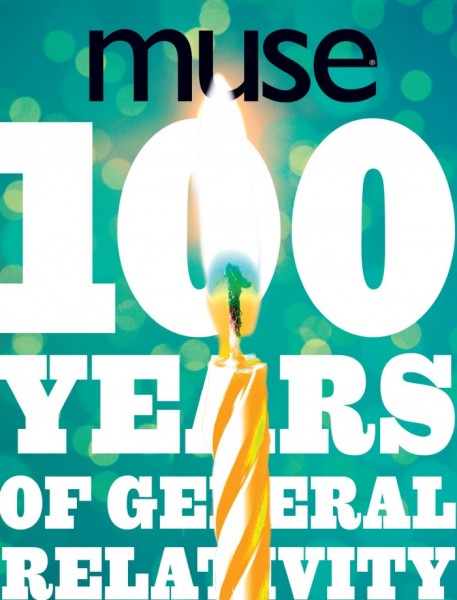 “What would you say to Einstein if you could sit and have a cup of tea with him?” MIT physicist Max Tegmark answered that question in the November/December 2015 issue of Muse magazine. Tegmark studies the structure of the universe, which means that he really gets Einstein’s theory of general relativity. “General relativity makes reality more fun,” Tegmark told Muse. “It transforms space from this boring, static place that Euclid envisioned to this dynamic entity that can stretch, curve into black holes, or ripple with gravitational waves.”

Last week, scientists announced the first direct observation of the ripples in space-time that Einstein predicted a century ago. It was a major WOO HOO moment for physicists—and for humanity. I was exhilarated when I heard the news. I was also grateful to be the editor of a science magazine for super-smart kids. My job is to present the most exciting STEM stories in the clearest, most interesting terms. Our November/December issue celebrating the 100th anniversary of general relativity had helped me understand (or start to understand) the theory. I even developed a Tegmark-like appreciation for how fun it is.

Einstein’s theory of general relativity explained gravity as a curvature in space-time. The movement of certain massive objects—like black holes—generates a “wave” in the fabric of space-time. Many brilliant minds agreed with the theory, but observing gravitational waves was immensely difficult. On September 14, 2015, two United States observatories created expressly for this purpose detected a tiny disturbance to space and time. These signals proved that a gravitational wave had washed over Earth. The wave originated about 1.3 billion years ago, when two gigantic black holes collided.

Hear the actual gravitational wave here. And read the full interview with Max Tegmark below—it’s just part of our “general relativity” issue and Muse’s ongoing engagement with the coolest stories in the universe.

(By the way, we’d like to share a dish of raspberry ripple ice cream with Einstein and tell him, “Wow, you were right again!”)

Happy birthday Albert Einstein. And also…Happy Pi Day! By some crazy, random happenstance, Einstein’s birthday is March 14, also known as Pi Day (get it? 3.14?)   We celebrate Pi Day at my office with a plethora of pies and bad math puns. But I hadn’t realized until this year that it was […]