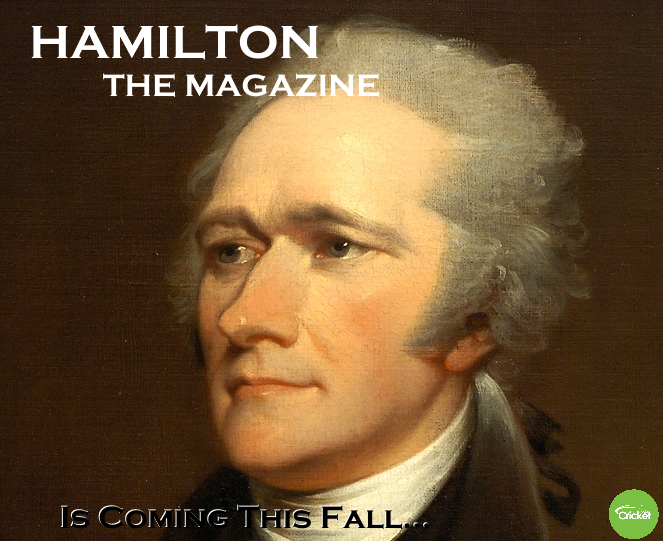 Like half the country, we here at Cricket Media are obsessed with Hamilton, the musical sensation that is teaching the history of the USA while it entertains with music, dance, and the catchiest lyrics ever. Lin-Manuel Miranda has done an amazing job of boiling down the key events of the American Revolution and the early development of the United States government into what will fit into a 2.5-hour show. If your kids are listening to the soundtrack of Hamilton the Musical they are no doubt absorbing key dates, places, and events, and learning the names of the people who make up our nation’s history.

What did I miss?

However, there is a lot more to know about these people, places, and events. As you might suspect, Lin-Manuel Miranda took some liberties with the actual history of the country that Cobblestone, our American History magazine aimed at kids 9 and up, is ready and willing to correct. Coming this October, Cobblestone will devote an entire issue to the “Ten-Dollar Founding Father” with articles that delve even more deeply into A. Ham’s childhood in the Caribbean, role in the military during Revolutionary War, and the infamous duel between Alexander Hamilton and Aaron Burr.

But the best news is yet to come: this issue will also feature an interview with someone from the original cast of the musical. We can’t mention any names yet but you definitely will not want to miss this chance to hear about Hamilton the Musical from someone who knows it better than anyone else. Oh, and did I mention there will be photos as well? In short, it will be a Hamilton extravaganza that your favorite Hamilton fan will not want to miss.

Don’t Throw Away Your Shot!

So how can you get your issue when it comes out in October? Subscribe to Cobblestone now. Our subscribers will be the first to receive the Hamilton issue when it is released and the first to get the inside scoop on Alexander Hamilton, Aaron Burr, the development of the U.S. Treasury, and so much more. It takes a few weeks for the first issue of a subscription to hit your mailbox (some things still move as slowly as the Redcoats leaving Yorktown) so you need to subscribe now in order to be assured that you will receive the October issue of Cobblestone hot off the presses.

That Would Be Enough

Yes, an issue all about Alexander Hamilton would be enough, but we have more to share with you. Cobblestone has numerous back issues that are perfectly positioned to provide a potential American history buff with even more information about the people, places, and events of the late 1700s/early 1800s, including issues devoted specifically to the feud between Alexander Hamilton and Thomas Jefferson that eventually led to the creation of a two-party political system, and in-depth profiles of key players including John Adams, Thomas Jefferson, and the Pride of Mount Vernon himself, George Washington.

We can’t wait to make history come alive for a whole new generation of Federalists and Democratic Republicans. It is sure to Blow Us All Away.