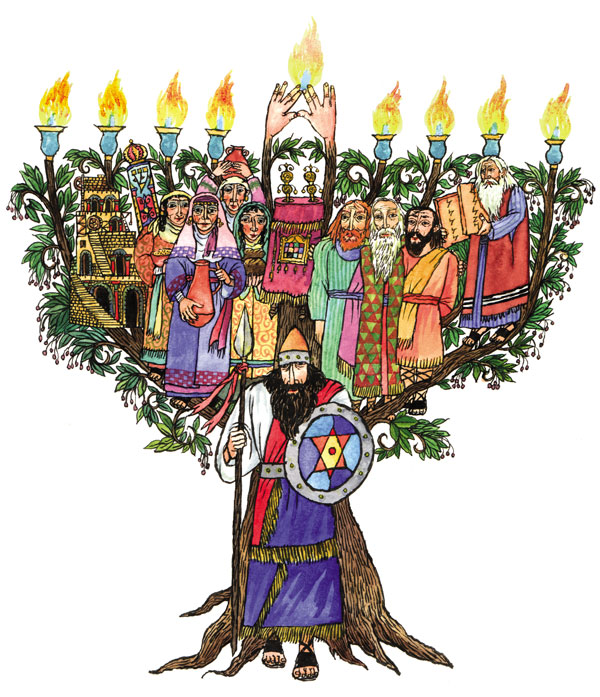 A Hanukkah Story to Enjoy with Your Family

The latkas have been eaten.

The dreidles have been spun.

The candles have been lit.

The presents have been opened.

But your family is still clamoring for more Hanukkah, right? Who can blame them? Hanukkah is meant to be celebration, a joyous event, a simcha. Here is a Hanukkah story guaranteed to add some humor to your family’s Hanukkah celebration. For more stories like this one, be sure to subscribe to Cricket Magazine.

The Hanukkah Guest
By Eric A. Kimmel
Illustrated by Thor Wickstrom

OLD BEAR ROUSED himself from his winter sleep. He stretched and yawned a gigantic yawn. Finally he poked his nose outside his den. A soft blanket of deep snow covered the ground. Spring was still many months away. Old Bear wrinkled his nose. What was that delicious smell? It smelled like something to eat, which reminded Old Bear that it had been months since he had eaten anything. Old Bear’s empty stomach rumbled. He shook himself all over and lumbered out of his den to follow the delicious smell. 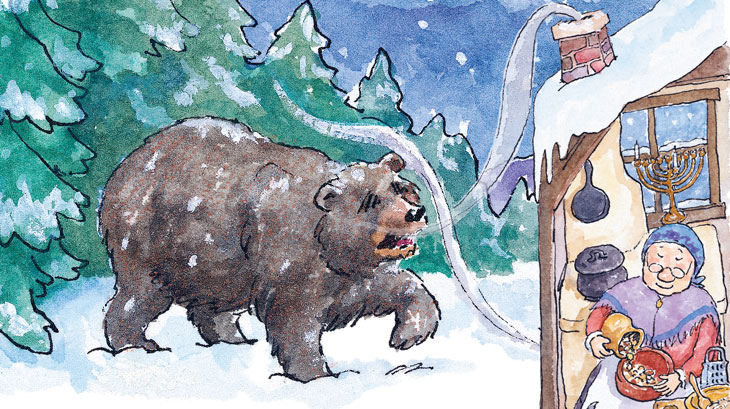 Bubba Brayna took the last potato latke from the pan and put it in the oven with the others to keep warm. Bubba Brayna was ninety-seven years old and did not hear or see as well as she used to, but she still made the best potato latkes in the village. Every year at Hanukkah time, all her friends made their way through the snow to her little house on the edge of the forest. How they loved those latkes! Bubba Brayna always made plenty. But tonight, on the first night of Hanukkah, she had made twice as many as usual. Tonight was special. Tonight the rabbi was coming.

Bubba Brayna put on a clean apron and set the table. She filled a bowl with nuts for the dreidel game. Kitzel the cat rubbed against her ankles as she bustled around the kitchen. One last chore: Bubba Brayna went to get the candles for the menorah. Just then she heard a knock at the door.

It wasn’t exactly a knock, more like a soft thumping. “My guests must be early,” Bubba Brayna said. She opened the door. The cat hissed and dove under the table. “Why, Rabbi, how nice to see you!” Bubba Brayna exclaimed.

“And Happy Hanukkah to you, too. Please come in.”

Old Bear lumbered into the house. He shook the snow from his fur.

“I’ll take your coat, Rabbi. My, how thick it is! It must be very cold outside.” Bubba Brayna tugged at Old Bear’s fur. 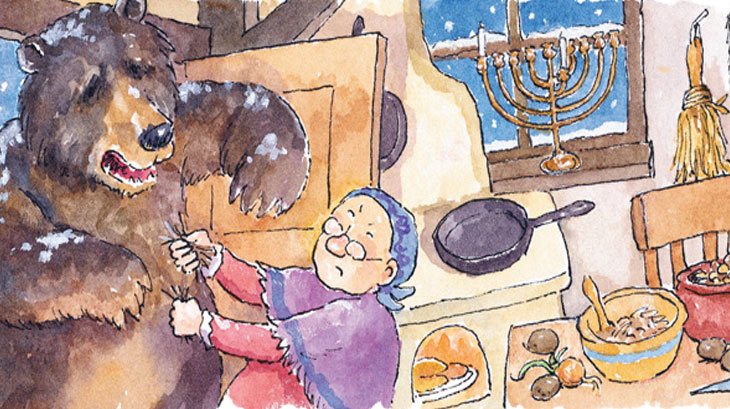 “Oh, you prefer to leave your coat on? Well, that’s all right. It is a bit chilly in here. Come into the kitchen. I’ve set the table for a lovely Hanukkah evening.”

Old Bear followed Bubba Brayna into the kitchen. The delicious smells made his nose twitch. He followed his nose to the oven.

“Rabbi, I’m surprised at you! You know we don’t eat until we light the menorah.”

“That’s all right. I know you were teasing. I’ll light the candles. Will you say the blessings?”

Bubba Brayna struck a match and lit the shammes candle. Then she lit the one for the first night. Old Bear mutter ed and growled. “Rrrrumph . . . grrroooowr . . . rrrrr . . .” 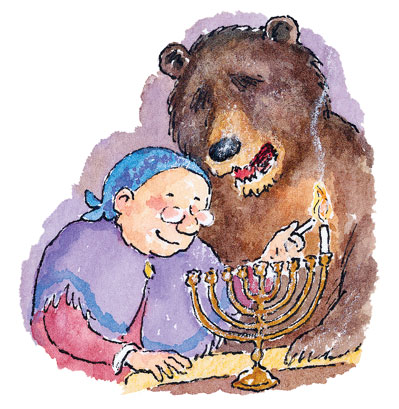 Bubba Brayna pulled out a chair. Old Bear sat down. “We’ll play one game of dreidel before dinner. Here are some nuts for you to play with. And some for me.” Old Bear’s nose started twitching again. He picked up a nut and cracked it in his teeth.

“Rabbi, you won’t have any nuts for the game if you eat them all.”

“Don’t worry. I have more nuts if you need them. You know the rules. First you put in some nuts and I put in some nuts, then we spin the dreidel.” Bubba Brayna pushed half her nuts and half of Old Bear’s nuts into the center of the table. She gave the dreidel a spin. Old Bear sniffed curiously at the dreidel as it whirled around. It stopped on the letter gimel.

“Gimel! That means ‘take all.’ I win.” Bubba Brayna swept the nuts into her apron.

“Don’t be angry, Rabbi. It’s only a game. Here!” She tossed him a nut. Old Bear caught it in his paws, cracked it handily, then begged for more. “No, Rabbi, no more nuts. It’s time for dinner.”

Old Bear snuffled and grumbled. Bubba Brayna opened the oven door and took out a platter piled high with steaming potato latkes. Old Bear’s nose twitched as she set them on the table. “Do you prefer your latkes with sour cream or jam?” 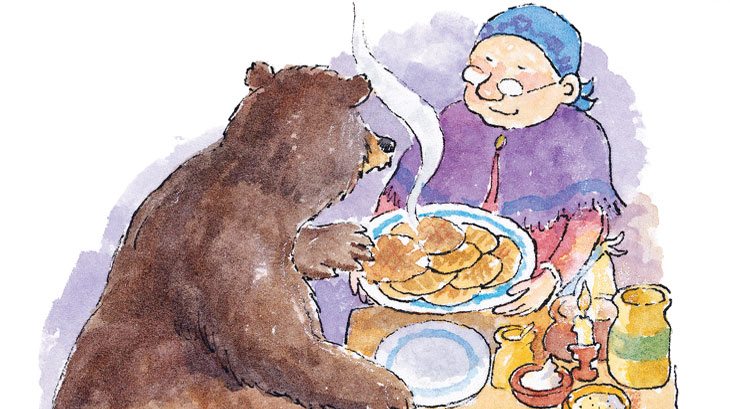 “Jam. I thought so.” Bubba Brayna smeared five big latkes with jam and stacked them on Old Bear’s plate. Old Bear snuffled with pleasure as he gobbled the latkes down.

“Rabbi!” Bubba Brayna laughed. “You should use a fork. You have jam all over your beard.” She wet a towel and wiped Old Bear’s face. “What an appetite! Have some more. Try these with sour cream.”

Bubba Brayna smeared a big pile of latkes with sour cream for Old Bear. He gobbled them down in three bites. Bubba Brayna giggled. “Oh, Rabbi! You must really like my latkes. I’ve never seen anyone eat latkes so fast. You eat like a bear.”

Old Bear ate and ate until all the latkes were gone. He licked jam and sour cream from his muzzle and his paws. Then Old Bear began to feel drowsy. He yawned. His great head flopped on Bubba Brayna’s table. 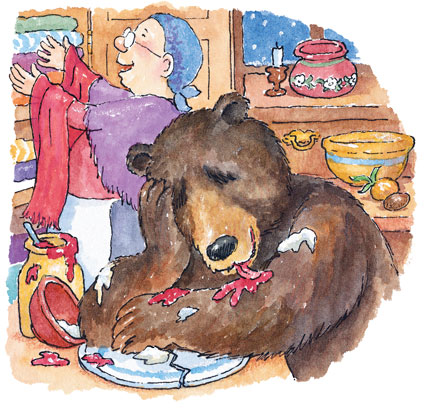 “Rabbi, you’re sleepy. Who wouldn’t be after such a meal? All the latkes are gone. It’s time to go home. But before you leave, I have a Hanukkah present for you.” Bubba Brayna took out a red woolen scarf from the cupboard. She wrapped it around Old Bear’s neck. “This scarf will keep you warm on the coldest nights. I knitted it myself.”

Old Bear shuffled to the door. It was time to return to his den. He felt very sleepy. “Rrrrumph,” he growled as he ambled off into the night. He turned around one more time before disappearing into the forest. “Rrrrumph.”

“Good night to you, too, Rabbi! Happy Hanukkah!” Bubba Brayna was washing the dishes when she heard another knock. “I wonder who that is?”

“Shalom, Bubba Brayna!” shouted her friends and neighbors, wishing her a happy Hanukkah. 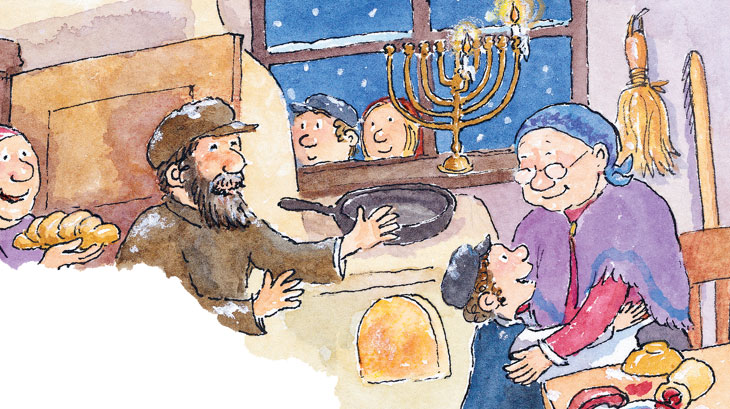 “Shalom, everybody!” Bubba Brayna cried. “How nice to see you. Please come in. I’m sorry I don’t have any more latkes. The rabbi came by. He ate them all.”

“Bubba Brayna, don’t you recognize me?” It was the rabbi.

“The rabbi couldn’t have eaten the latkes,” someone said loudly in her ear. “He was in the synagogue with us the whole time.”

Bubba Brayna scratched her head in bewilderment. “Something strange is happening here. Rabbi, I think there is an impostor going around. He looks like you. He talks like you. He even has your beard.”
Just then Esther and David, Bubba Brayna’s two grandchildren, cried, “Come look!”

Everyone ran to the kitchen to see what was wrong. They found the floor covered with bear tracks.
“A bear! And I thought it was the rabbi.” Bubba Brayna had to sit down. Soon she began to giggle. “That was a very clever bear . . . or a very foolish Bubba Brayna. Ah well, let the bear have a happy Hanukkah. I had a happy Hanukkah, too. And so will you, my dear friends. David, go bring some potatoes up from the cellar. Esther, get my grater and bowl. Everybody has to help. You too, Rabbi. But I promise there will soon be latkes for everyone!”

Deep in the forest Old Bear slumbered in his den. His stomach was full of potato latkes. The warm woolen scarf was wrapped snugly around his neck. Pleasant dreams, Old Bear. And Happy Hanukkah. 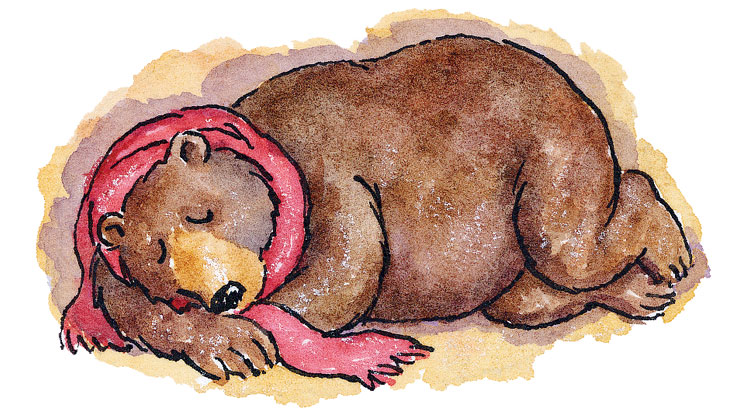