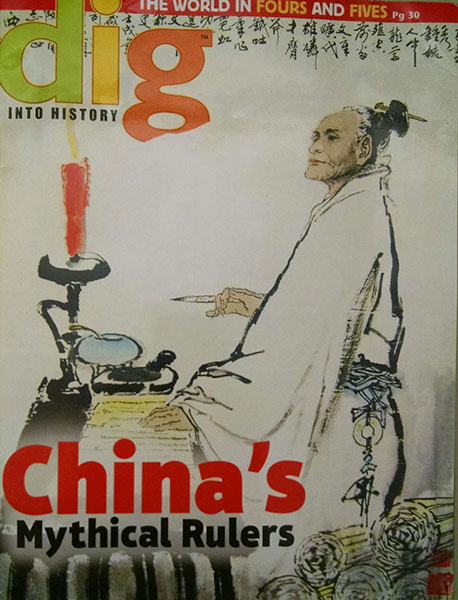 “China’s Mythical Rulers”—now that sounded intriguing! As a Classics major, I knew well the myths of the ancient Mediterranean world, but not so much about the myths of ancient China. Over the years, we had focused several issues of Dig Into History on China’s dynasties and a few on specific cities, including the Forbidden City. So who were these mythical rulers? I was intrigued. After some research and a few calls to colleagues in the field, I began developing an outline and soon went from wondering if I would have enough to fill an issue to the difficult task of choosing what to include—there was just so much.

I looked to the famed ancient Chinese historian Sima Qian for help and found it! The tales and details were riveting. Fuxi and Nuwa especially caught my attention—artists often portrayed them with their intertwined snake-like tails. With Shennong, they became known as the Three August Ones.

I kept reading and met the Yellow Emperor, whose wife is credited with the invention of silk. Myth began to intertwine with history as I kept moving forward from ancient past to more historical present. With each tale and with each personality, I came to better understand China’s history, Chinese thought, and how the country and people see their place in the world. Still, there was something missing in this story. What was it?

Well, “it” actually became several topics. I needed to include an article about the language—but not just characters and translations. Rather, I wanted to help non-Chinese readers, like myself, better understand how the character came together. And I found the perfect author—one who knew both Chinese and English and had a great way of explaining the meaning of radicals and the positioning of the various strokes. The issue was coming together and I could feel a sense of “wholeness.” I loved it.

The Let’s Go Digging section remained. For some issues, it leads the outline-draft. For China’s Mythical Rulers, it took some thought. A few back-and-forth emails with archaeologists who work in China, and we had our topics—sites with finds that date back millennia—“known,” perhaps, even to the mythical rulers! There was the largest bronze mask ever found, bird bone flutes that still play, a flying horse, and a cave that changed thinking on the meaning of pottery finds. 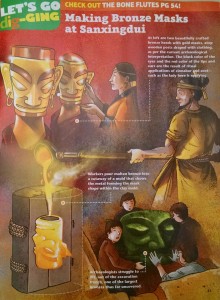 The outline was ready, and so were the authors. And, we all knew that the China’s Mythical Rulers—whoever they might have been and whenever—would have approved. We would much enjoy hearing your thoughts! Is there a topic you wished we would have covered? Do you have any unanswered questions? Let us know!

Back to School Traditions Start the Year off Right

Do you have a back to school tradition in your family? Back when I was a kid, going school shopping especially for new “school” shoes, was a big event in my family. We also did the big school supply shopping trip where my brother and sisters and I would spend an inordinate amount of time [&helli […]