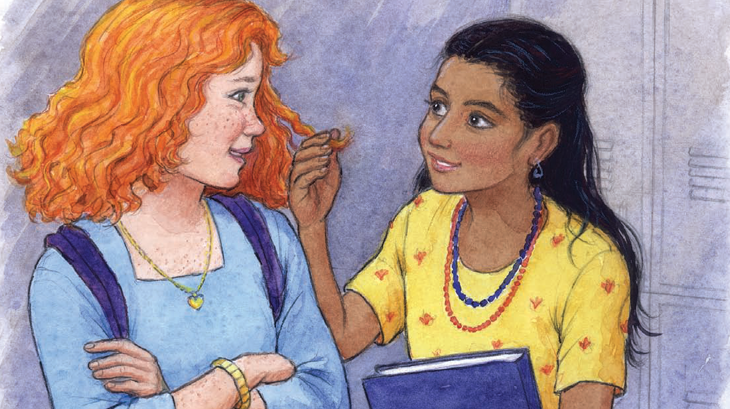 Your kids are heading into a new grade. Whether they’ll be surrounded by the same faces they’ve known for years, or they’ll be faced with the challenges and joys of making new friends, there are some insecurities they are likely taking with them. Have my friends changed over the summer? Will I have the same friends to rely on? How do I make new friends if my friends are not in my class, at my school, or if they are different?

We’ll get to a way to solve that in a second. First, a quick, non-sanctioned advertising plug: I enjoy Dove chocolates. In addition to being a tasty afternoon treat, they come with little fortunes on the wrappers. Last year, I got one that said “Compliments Are Free.” I saved it for my daughter who was about to make the transition from a private Montessori school to public school as a 4th grader. She was entering an upper elementary school, which fed from a lower school that most of the other kids had attended together for the last 3-4 years.

My daughter asked me what the wrapper meant.

“It means it costs you nothing to say something nice to someone.”

“But why would it cost me something?”

“Well, I don’t think its actual money they mean. Some people find it hard to pass along compliments. It may be that they are shy, or reserved, or compliments feel too personal, or too forward. But the wrapper is to remind them that it’s easy to say something nice. It might feel like it’s no big deal to compliment someone, but it could make a huge difference to someone else. It could make someone’s day, and then they’ll be nice back to you. If you pay someone a compliment, it might start a friendship.”

“Okay, that makes sense. But if they’re free, why do people pay compliments?”

It might feel like it’s no big deal to compliment someone, but it could make a huge difference to someone else. It could make someone’s day, and then they’ll be nice back to you. If you pay someone a compliment, it might start a friendship

When we went to back-to-school night a few weeks into the school year, the teacher told us she was shocked to learn that our daughter hadn’t travelled in the pack of kids from the lower elementary school because from day one, she fit right in and acted as if she was always friends with the group. It started with her sitting down at her desk and telling each girl in her quadrant something she liked about what they were wearing, had in their hair, or the themes they had chosen for their school supplies. These three girls from her original desk quad are some of her closest friends now.

Below you’ll find a sweet (like chocolate!) story that appeared in one of Cricket Media’s publications a few years ago. In it, a friendship is formed by a compliment, and as the narrator finds out, sometimes a compliment is an even sweeter treat than a delicious square of chocolate. But if you really want a quick way into someone’s heart, share both freely.

Musing Mom is in no way employed by Dove Chocolate and receives no “complimentary” kickbacks of candy based on this endorsement. She would, however, not reject compensation were it offered. The Color of Skin

A Story by Vijaya Khisty Bodach
Illustrated by Margaret Lindmark

I was 12 when I came to the United States from India. On the first day of school — Evergreen Middle School — I met a girl with the brightest orange hair.

“What are you staring at?” she demanded.

The girl laughed, her irritation disappearing. “Sure.” I ran my fingers in the orange waves framing her face.

“It’s beautiful, like fire,” I said. “And silky-soft. Not like mine — coarse.” I noticed little spots of orange on her nose and cheeks. “What are those spots?” I asked, staring at her face.

“Freckles,” said the girl. “Most redheads have them. Where did you come from, anyway?”

“India,” I said. “Everything is so different here.”

“Yeah, for starters you shouldn’t stare at people and ask to touch them,” she said.

I took a step back and apologized. “I’m sorry.”

Caitlin became my first American friend and taught me how to fit in. She stood by me, too.

Late in the fall, I went swimming at Pine Lake with my family. The water was icy-cold. Caitlin had told me that it was “Indian summer.” But it was cloudy and nothing like the Indian summers that I knew. The breeze felt soft and cool on my skin, as I read To Kill a Mockingbird. I couldn’t put the novel down and spent the rest of the afternoon reading. The next day, the skin on my shoulders burned and soon was flaking off in tiny rings. I diagnosed myself from my biology book as having ringworm.

When I showed Caitlin my ringworm rash, I didn’t expect her to laugh. “That’s a sunburn,” she giggled. She soothed it with lotions she got from her parents’ medicine cabinet. How strange, I thought, that I never got burned in India. It was probably because the rays from the sun were so intense there that I scrambled into the shade the minute I felt heat on my skin.

“It’s my mom. I’ll be right back,” Caitlin said. I waited in her room, and before long I could hear Caitlin and her mom arguing.

Mom: “I don’t want that dirty girl using my stuff.”

Caitlin: “She’s not dirty, Mom. She has a sunburn.”

Mom: “If she’s so brown, why did she get a sunburn? She must have some disease. She probably has lice as well.”

Caitlin: “Is that why you won’t let her come for a sleepover?”

Mom: “Honey, you don’t want lice jumping from her head onto your pillow, do you?”

I covered my ears with my hands; I didn’t want to hear any more. Shame seeped out of my brown skin. I wanted to scrub it raw. As I rode my bicycle home, I couldn’t stop crying, because I knew that Caitlin’s mother would try to break off our friendship.

But it didn’t happen. Somehow, Caitlin and I remained friends. We hung out at my house more than hers, but I noticed that she never brought up the topic of having a sleepover.

A few months later, Caitlin wanted to know whether I’d be going to the spring dance.

“It’s fun,” she said. “There’s music, and punch, and they even have some games set up if you don’t want to dance.” Caitlin twirled and snapped her fingers high above her head. I felt too shy to dance, but liked how freely she moved.

I didn’t think my mother would let me go, but I asked anyway. “The school is having a dance on Friday evening. Can I go?” Mother didn’t respond. “Caitlin thinks that it would be good for me to do other things besides studying,” I pleaded. “What do you think?”

“Hmmm. . .” Mother considered. She nodded her head for a long time and then finally said, “It will be good for you to make new friends. You can go.” I gave her a huge hug. I just couldn’t wait to go.

Caitlin’s mother drove Caitlin and me to the dance that night and stayed to chaperone. I wore my silky purple blouse with tiny mirrors stitched into the fabric. Caitlin borrowed my embroidered apple-green peasant top to match her green eyes. I waited anxiously for her mother to say something, but she didn’t. Maybe she’s getting used to me, I thought. Everyone was at the dance. At first the kids didn’t dance at all. Then, slowly, groups of boys and groups of girls moved toward the center of the gymnasium.

When Caitlin moved with her friends toward the center, I stayed behind, watching. David, a boy from my class, broke away from the group of boys and walked purposefully toward me. “Want to dance?” he asked. I followed him as he walked backward, his index finger beckoning me. I tapped my feet stiffly at first, but after a while, my arms and legs became fluid. Light bounced off the tiny mirrors in my blouse and I watched the reflection in David’s glasses. We spent the whole evening dancing at the fringe of the big group of kids.

“Can we hang out together sometime?” David asked, at the end of the evening.

“Sure,” I said, absolutely thrilled.

I couldn’t wait to tell Mother about the wonderful time I had dancing. But telling her about David was a mistake. “Hmmph,” she grunted. “I don’t like all this boy-girl business. We didn’t come to America so that you could think about boys. You concentrate on schoolwork.” My wonderful evening suddenly changed. I couldn’t believe what she was saying.

The next day, David called and asked if he could come over. I told him sure, but to bring homework so that we could study together. Mother got to the door first. I watched her back stiffen when she saw David. “This is David,” I said smiling, hoping that she would, too. “He came over to do homework.”
As we walked into the kitchen, Mother grabbed my arm and pulled me into the living room. I couldn’t believe that she was going to make a scene.

“It’s one thing to be friends with black people, but I will not have my daughter marrying a black boy,” she said. Her anger was scary. I was shocked into silence. I could feel the shame coming back. This time it seeped out of my cinnamon-brown skin because my own mother couldn’t see David with his chocolate brown skin as an equal. It was a different shade of the same shame.

Then I found my voice. “He’s only here to study,” I said very quietly. “Besides, what’s the color of skin got to do with anything?” I pried her fingers off my arm and walked away. Now I knew how Caitlin had felt when her mother refused to let me sleep over because my skin was the color of dirt. I picked up my books and joined David.

“And redheads like Caitlin, Chinese and Japanese people, Native Americans and blondes,” I said. “Let’s give it some time. My mother’s very dramatic; everything’s a matter of life and death. . .and marriage!”

We giggled and opened our history books. My mother made tea. Under her watchful eyes, I sneaked peeks at David, who returned them. We wrote our essays, compared them, and went outside to play football. I kicked a soccer ball to David and he tossed his American football to me. We laughed and argued about what football should be. We called Caitlin to come over and she and David took turns teaching me the finer points of throwing and catching a football.

I looked at them and thought, we’ve come a long way since the days of Scout in To Kill a Mockingbird. For Caitlin, David, and me, the color of skin is just that — a color.