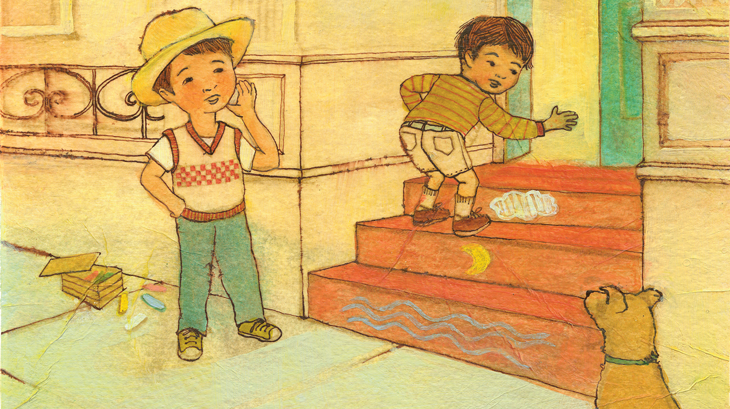 Around this time each summer, the joys of no school start to fade into the cries of “I’m bored.” I’m not sure there is another phrase emerging from my child’s mouth that annoys me more than the ubiquitous “I’m bored.” I always try to tell her to think before using it because it is inevitably going to lead to suggestions to clean up her room or practice for her music lesson. This is obviously a personal choice, but I try not to give her too many suggestions for how to alieve her boredom. I want her to come up with some ways to fill her days based on her interests, imagination, and the toys currently strewn across the playroom floor.

However, I do like the idea of introducing my daughter and her friends to a whole new crop of games, and I don’t mean the electronic kind. Remember tag? Hide and seek? Spud? I don’t really see that many kids playing those types of games these days and it makes me kind of sad. Websites like Kidspot have a nice list of outdoor games, but if you’ve ever tried to make suggestions to your child for things to do, you’ve probably also noticed that if the suggestion is not the exotic side, it tends to be discounted as “boring.”

Luckily I have a suggestion for bringing a little international flair to your child’s playtime. Check out the article below which appeared in Ladybug a few months ago to find some wonderful (and simple!) outdoor games for kids from places like Chile, South Africa, and Spain. If you have some other suggestions that have satisfied your child’s cries of “I’m bored!” please share them with us in the comments below. And for more great articles like these, be sure to subscribe to Ladybug.

Children’s Games Around the World

Sebastián and Diego are playing Cielo, Luna, Mar—or Sky, Moon, Sea—on their front steps. Sebastian draws a cloud on the top step and a moon on the next step. He lets Diego draw waves for the sea on the bottom step. Diego is great at drawing wiggly lines.

Oops! Diego jumps onto the Moon step. Where was Diego supposed to jump? Tefo, Palesa, and Mosa gather pebbles to play Dithwai. First they memorize the colors and shapes of their pebbles. They are pretending that their pebbles are cows, which they must guard carefully in their pens. They must remember what their cows look like in case anyone steals them. Whoever has the most pebbles at the end wins!

Mosa found mostly pink pebbles, and thinks that this will make them easy to remember. While she closes her eyes, Tefo and Palesa each hide one of her pebbles in their own pebble pens.

“We capture your cows!” Palesa and Tefo yell. Mosa opens her eyes. She must find her pebbles to get them back.

“There’s one of my cows,” she says, taking her pink pebble from Palesa’s pile, “but where’s the other one?” Carlos and his friends play tag in his front yard. Their game is called La Luna y las Estrellas de la Mañana, which means “the moon and the morning stars.”

Carlos stands under a big oak tree. He is the moon, and isn’t allowed to leave the tree’s shadow. His friends are the stars. They have to run in and out of the shadow without being tagged.

“I’m a shooting star!” yells his friend Célia. She races through the tree’s shadow. But Carlos is a speedy moon! He dashes to the very edge of the shadow, stretches out his arm, and tags her! It’s recess! The boys and girls from Mrs. Du’s class form two teams for a Flower Relay Race. Each child gets a paper flower with a long string tied to the stem. There are two small trees on the playground. The teams line up facing the trees.

“One, two, three—GO!” says Mrs. Du. The first two children race to their trees and tie their flowers to a branch. Then they run back as fast as they can to tag the next friend in line. When the game is finished, both trees will be covered with beautiful flowers.

0
PrevHave You Talked to Your Kids About Hiroshima?
Amazing Adventures from the Editor of AskNext