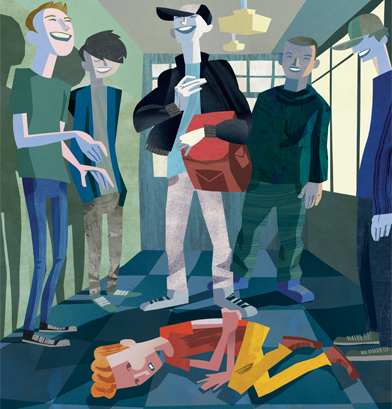 Last week we posted this awesome blog about how October is Anti-Bullying Awareness Month. In that blog post, we featured part 1 of a 3-part story called “Like Water to Ice” by Tyler Keevil. At the time, we promised that we would post parts 2 and 3 of the story later in the month. Well, it’s later in the month so we are please to present part 2 of “Like Water to Ice.” Enjoy the story and please remember to keep an eye out for bullying wherever it may be happening in your neck of the woods.

If you are being bullied, help is out there. Remember that bullying can affect you in many ways. You may lose sleep or feel sick. You may want to skip school. You may even be thinking about suicide. If you are feeling hopeless or helpless or know someone that is, please ask for help. One place to get advice and talk to a real person about what is happening in your life is the LIFELINE at 1-800-273-TALK (8255).

Recap from Part 1:
When Jake walks through the halls of his school, he’s regularly hassled by Mike Glover and his gang of bullies. They call Jake “rage case” because he gets angry and refuses to run away and avoid them. Jake’s mom takes him to start kung fu lessons. Jake is skeptical at first, especially when Master Kinsella tells him that in kung fu he will learn how not to fight. Jake is impressed when Master Kinsella demonstrates the sweeping palm block to easily sidestep Jake’s hardest punch. The kung fu master is fluid and relaxed until he strikes hard—like water to ice. Jake can’t wait to confront Mike Glover. “I’d show him who was a rage case.”

MY MOM WORKS as a prep cook at our local pizza joint, and on her salary we couldn’t afford to pay for lessons up front, so Master Kinsella let me pay for each class on the day. I didn’t have to buy a new uniform, either. He had one left over from a student who had moved away. It was a bit too big for me but I figured I could grow into it. Both my uniform and sash were white, for a novice, and I had a lot to learn. I worked hard at mastering my sweeping palm block and the various other defenses he taught us: inside forearm block, downward forearm block, sticky hands. Then there were the attacks: knifehand strikes, elbow strikes, monkey’s paw, front kicks, back kicks, crescent kicks— even a flying sidekick. I was hooked. I went down there with religious regularity.

Sometimes, if you showed up early for class, Master Kinsella would take a few minutes to spar with you. It was almost impossible to hit him, of course—which didn’t stop me from trying to score a point.

“Have you ever had to use kung fu?” I asked him, during one of these sessions.

He smiled. “I use it every day—though maybe not in the way you mean.”

I knew he was trying to teach me a lesson, but I still wondered if all this kicking and punching would make a difference in a real fight—like if somebody jumped you for your cell phone, or if Mike Glover and his buddies came after me again. In the dojo everything seemed so secure, but I knew that the world out there could be a lot more threatening.

Then one day I found out. 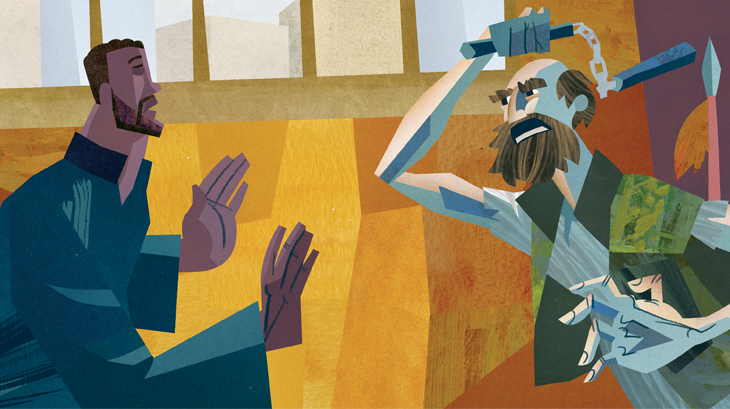 It was a typical class. Master Kinsella had just run us through the warmup when I heard a commotion in the foyer. Glancing over, I saw a guy in a tatty flak jacket stumbling into the dojo. He had a grimy beard and thinning hair that sprouted out all over like loose wiring.

“I come to sign up,” he said, slurring the words a little and gesturing wildly with his hands. “I wanna learn some of this kung fu junk.”

We all stood there, terrified, as Master Kinsella padded across the floor toward the guy, holding up his hands in the neutral position he’d taught us.

“This is the youth class, sir,” he said. “If you’re interested in taking lessons I suggest you come back at another time, when you’re not under the influence of alcohol.”

The guy glared at him. “I’m not drunk, man. Call me a drunk.” He took a step to the left, sort of swaying on his feet. “Too good for me, huh? Bet I could take you, buddy.”

Master Kinsella had closed the gap, still holding up his hands.

Then the guy did something foolish. He staggered to the weapons wall and snatched a pair of nunchakus from the hook they were hanging on. He didn’t know how to use them, but he started flailing them in Master Kinsella’s direction. Master Kinsella stood very still. Even unarmed, he looked a lot more dangerous than the other guy did while brandishing a weapon.

“Back off,” the guy said, and swung at him. There was a quick flicker of movement and then the guy was on the ground, eyes closed, not moving. To this day I don’t know what Master Kinsella did—it was that fast.

Moving slowly, Master Kinsella knelt down and gathered up the nunchakus. Then he touched the man’s neck, and I realized he was feeling for a pulse. One of the younger kids was crying, but a few of us older students began to drift over. Master Kinsella looked up.

“Jake, would you mind giving me a hand?” I nodded. Master Kinsella picked the guy up by the armpits, and I lifted his feet. Together, we carried him upstairs to the entrance. It seemed strange to step from the dojo onto the rain-drenched street, still in our uniforms and carrying this guy who stunk of sour beer. Passing pedestrians glanced at us and hurried by, not wanting to get involved.

“Just set him down here.”

We propped him in a doorway, out of the rain. Master Kinsella ducked inside for a minute, and when he returned he had ten bucks that he tucked in the guy’s jacket pocket.

“That move was pretty awesome,” I said.

But Master Kinsella didn’t look pleased or triumphant. He just looked sad. He put his hands on his hips and stood there, his uniform darkening with rain, gazing down at the guy.

“People just want a little attention,” he said, almost to himself. “A little respect.”

Then he glanced at me. “We’re all so scared these days. And that’s what makes us angry.”
I nodded—not quite sure I understood.

After that, I stopped worrying about whether kung fu worked in the real world or not, and I stopped worrying about whether or not I could take Mike Glover in a fight. Of course, just because I wasn’t too bothered about Mike didn’t mean he wasn’t bothered about me. I’d managed to avoid him and his gang at school by keeping a low profile, but coming home one day I saw them hanging around outside this minimart on the street. As soon as they spotted me they spread out to block my path. A few circled around behind me.

“Haven’t seen much of you lately, rage,” Mike said. “You gone all chicken on me?”

He swatted the brim of my baseball cap, forcing it down over my eyes. He was trying to get me to go berserk, as usual. But the old rage wasn’t there. I thought of Master Kinsella. I adjusted my cap and held up my hands, palms out.

“Nah, dude,” I said. “It was just getting a bit boring, wasn’t it? Every time we ran into each other it was the same old thing. But I’m all done. Find somebody else to hassle.”

He laughed uncertainly and reached out to grab my collar. I didn’t mean to do anything but my hand just sort of moved— catching his forearm and guiding it past my face, using the same sweeping palm block we’d learned in that very first class. Then I sidestepped and skirted past Mike, continuing down the street.

“Where you going, rage?”

Without looking back, I shouted, “I’m going to buy you a new personality, Mike.” 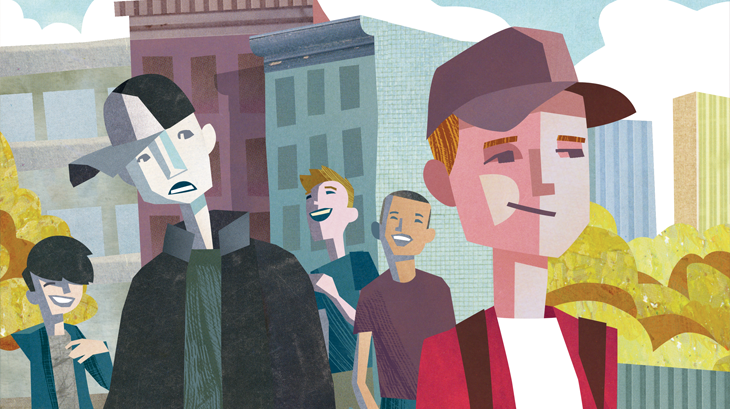 I heard a couple of his friends laughing. I’d burned him good.

“Hey,” he shouted. “Come back here and say that to my face!”

You could tell he didn’t know what to do, though. I just kept walking, and they didn’t chase me down or anything. I couldn’t believe it. After months of buildup, that had been our big showdown.

I got an even bigger surprise in the cafeteria the next day. After I’d grabbed my burger and fries, one of Mike’s friends offered me a seat at their table. I joined them and ate quietly, listening to them talk. Nobody said much to me, but they didn’t mock me, either.

As they stood up to go, Mike asked, “What you doing after school, rage?”

“Come hang with us.”

“Might as well.” Mike grinned. “Having a rage case around is good for a laugh.”