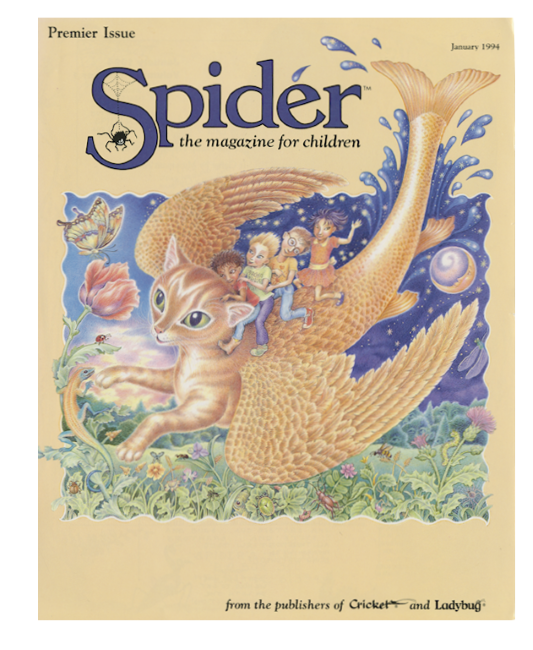 The year was 1994. A first-class stamp cost 29¢, the White House was just about to launch its first web page, and the Chunnel (the tunnel between France and the United Kingdom) was about to open. Oh, and one other important thing happened: Spider magazine, Cricket’s new offering for beginning readers ages 6 to 9, was born.

Cricket had already been going strong for 20 years by the time Spider make its entry onto the literary scene. During that time, the editorial and art teams had learned a few things about what makes an amazing magazine experience for kids. For example, they were adamant that this new magazine would not talk down to kids and, like it’s big brother Cricket and its little sister Ladybug, Spider would serve up a monthly dose of lighthearted, funny, amusing, nondidactic stories and articles accompanied by artwork so beautiful that both kids and adults would want to frame it and hang it on their walls.

Sure enough, the first issue of Spider magazine had a beautiful cover by artist Leah Palmer Preiss, and the same high quality stories and articles as Cricket. And also like Cricket, Spider had its own cast of characters living in the margins, providing their own brand of humor, insight, and assistance to readers as they read through the magazine.

While almost all the characters in the margins are bugs of one type of another (hey, we’re all a little buggy in our own way, right?), each character has its own personality and its own way of engaging with readers: Spider is a fun-loving trickster who enjoys cracking jokes and playing pranks. Sam is a shy and gentle caterpillar who loves thinking up new inventions. Sonya is a bold, snarky, and colorful damselfly who is often more like a frenemy than a friend to Spider. Thistle is a Canadian thistle weevil who is “cute as a cranberry” and serves as the host of our craft and activity sections. And Ophelia is the oldest and wisest of the bugs, a maternal grasshopper who loves music, poetry, and art. Oh, I almost forgot to mention Miro, our French cooking mushroom (he would not be happy about being forgotten!). Miro eez a treasure trove of recipes and food-related wisdom. Heez specialty eez chocolate mousse (“Mousse au Chocolat”), but he’s been known to excite everybuggy’s taste buds with exotic recipes like marshmallow-acorn-guava cupcakes. (Miro “speaks” with zee French accent. Naturally.) 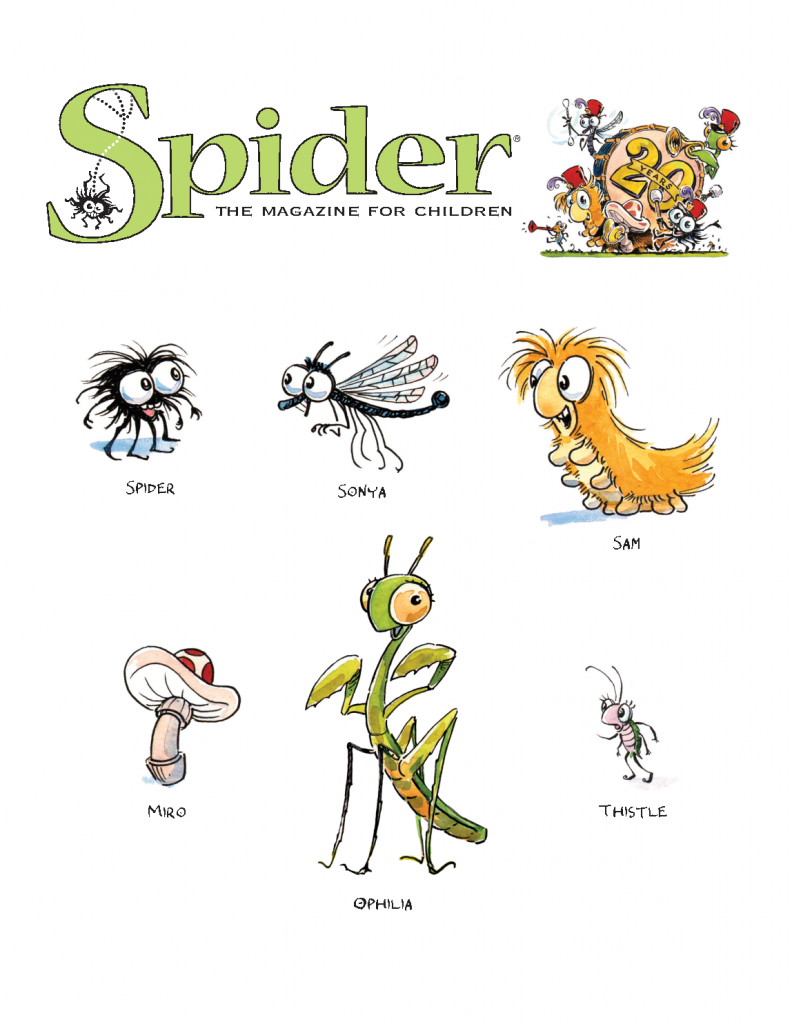 Together these bugs help guide our readers through each issue of the magazine. While some features have changed over the past 20+ years, you’ll consistently find features such as

As a parent of a beginning reader, one of my favorite parts of Spider is the help our little buggy friends provide to our fledgling readers make their way through the pages. Here’s an example from the current issue of Spider of how the Bugs seamlessly help kids make sense of difficult words or concepts.

They made a Monty Python joke. Love that!

If you know a kid between the ages of 5 and 10, they are missing out if they are not growing up reading Spider magazine. Subscribe now to share amazing stories, beautiful art, and even a Monty Python reference or two.

4
PrevThe Olympics: A Look Back
Making the “Beach Read” a Thing for KidsNext