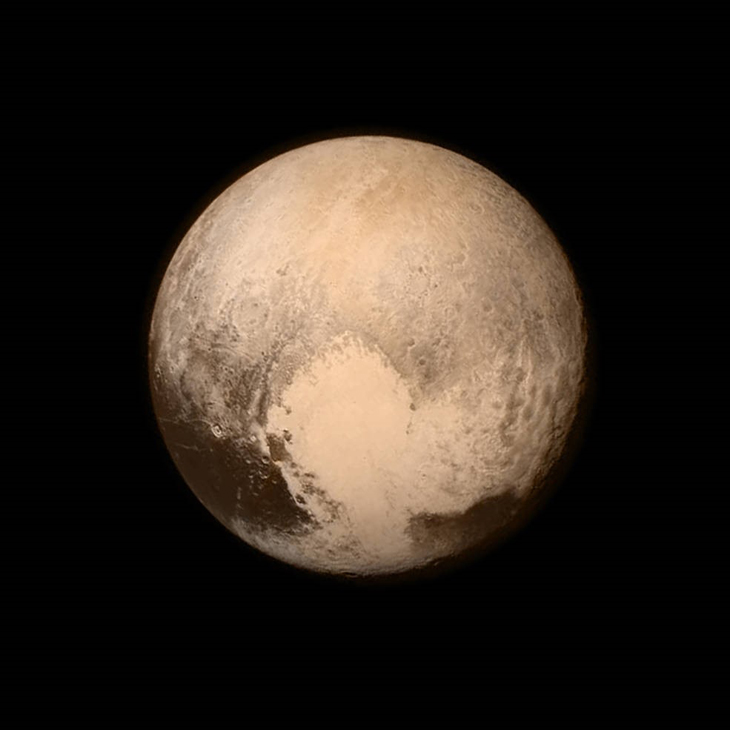 My daughter and I heard a news story on NPR the other day about NASA’s New Horizon spacecraft’s nine-year, three-billion-mile journey to Pluto. The story caught our attention because it focused on whether Pluto was actually a full-fledged planet or just a dwarf planet as it had previously been labeled in 2006. The scientist interviewed in this story is named Alice Bowman and she oversees daily operations for NASA’s mission to Pluto. Dr. Bowman has never fully accepted the change in Pluto’s status. “Pluto is a planet,” she said, “and that’s the way I will always think of it.”

I think it was Dr. Bowman’s passionate defense of Pluto’s status as a planet that really caught my daughter’s interest. As soon as the story ended, she started firing questions at me: What’s the difference between a planet and a dwarf planet? How come the scientists don’t agree? What does Pluto look like? Why does it take so long for a spacecraft to get to Pluto? Predictably, I didn’t have an answer to any of these questions. We looked up some information when we got home, but most news articles are not written to accommodate the types of questions a 9-year-old thinks are important and don’t contain the basic background information a child needs to makes sense of the story.

That’s when I realized we were looking in the wrong place. News articles are great for adults, but for a kid with a fledgling interest in a technical subject, what we really needed was the kind of articles that are commonly found in high-quality magazines such as Muse and Ask. The editors of these publications take great care to deliver factual information written from a point of view that children will find relevant, delivered on a reading and comprehension level that children will be able to digest. Sure enough, we flipped through some back issues and came up on the article below. If you’ve been getting a lot of questions about Pluto, or you just want to spark an interest in your own child about Space, this story called “It’s a Big Universe Out There” could be the perfect way to do it. And just for the record, my daughter says she agrees with Dr. Bowman. Pluto will now always be a full planet, not a dwarf planet, in her eyes.

It’s a Big Universe Out There

Are scientists today looking for extraterrestrials—ETs? Yes, we are looking for ETs just like a detective would. We use telescopes to listen and look for “signals”—radio, radar, laser pulses, and microwave signals—from distant worlds where ETs may live.

Why don’t we just take a rocket trip and cruise from star to star until we find some ETs? Hollywood’s Star Trek explorers can do that. But in real life, we face long trips just to get to the planets in our own solar system. NASA’s Voyager I was launched in 1977. It was the first spacecraft to visit Jupiter (1979) and Saturn (1980).

Today, it’s headed toward the stars at a speed of more than 38,000 miles per hour. That’s more than 912,000 miles each day. It is the fastest spacecraft to leave our solar system, but Voyager I is slow compared with a beam of light.

Let’s imagine that we can ride on a beam of light. We fly by the Moon in 1.3 seconds—about two heartbeats. We whip by the Sun in a little more than 8 minutes. We reach Pluto in about 5½ hours. But we have to ride the light beam for more than 4 years to reach the Alpha Centauri system, which has three stars. These are the closest stars to

the Sun and Earth. Our fastest spacecraft are much slower than light. At the speed of Voyager I, we’d reach Alpha Centauri in 70,000 years. All the other stars and their planets are farther away.

Our Sun and the Alpha Centauri system are neighbors in the Milky Way Galaxy. How big is the galaxy? The galaxy has about 400 billion (400,000,000,000) stars. The stars and their planets form a giant pinwheel around a black hole at the center of the galaxy. If we ride on the light beam again, we travel for about 100,000 years to cross the Milky Way galaxy. And the Milky Way is only one of billions of galaxies in the universe. Light from those galaxies takes millions of years to reach us here on Earth. The universe is a BIG place!

So it simply takes too long to travel to stars. We would have to go faster than light to visit the stars. But there is a speed limit. So we study the universe using many kinds of telescopes. We look and listen for signals that could travel at light speed from ETs to us.

News articles are great for adults, but for a kid with a fledgling interest in a technical subject, what we really needed was the kind of articles that are commonly found in high-quality magazines such as Muse and Ask.

130
PrevThe Poetry of Life
A Stripey Look at First ConceptsNext