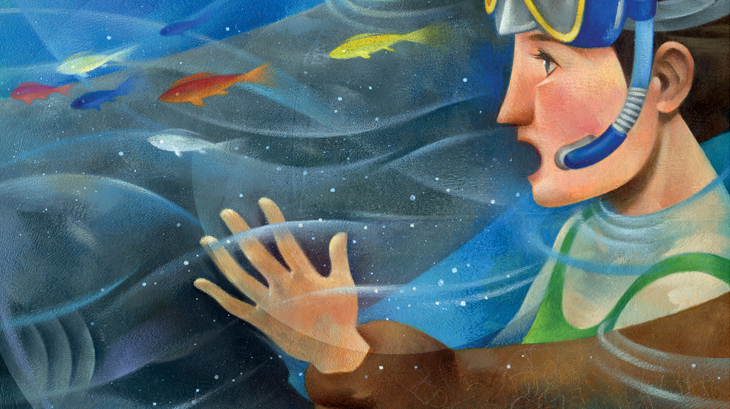 How to Talk about Sharks with Your Child

With all the focus on sharks in the media – from Shark Week on Discovery to shark attacks in the Carolinas – your young ones may be asking a lot of questions about the fascinating and sometimes frightening fish. They might even be afraid of them. As a blogging mom once wrote, sharing childhood memories of the terror you felt watching Jaws or viewing circling sharks on aquarium visits might not ease the anxiety. The solution for this particular mom? Reading a book about baby sharks and families, so her daughter’s curiosity could overtake her fear.

At Cricket Media, we agree empathy is an excellent way to relate to a topic in a reassuring way. We’d like to share with you a first person account of an encounter with a large shark, a nurse shark, that allows the reader to get up close and personal with the shark (for those kids who are fascinated) while introducing the shark to those readers who are apt to be frightened in a controlled and respectful manner. Ultimately, the reader comes away with a lot of information about the nurse shark—its skin is smooth, not rough like most sharks, it gives birth to live young, it is large but usually harmless to humans—but the real takeaway is the reader’s newfound ability to see the shark for more than just its sharp teeth and to appreciate it as a fellow creature of this earth.

Ultimately, the reader comes away with a lot of information about the nurse shark—its skin is smooth, not rough like most sharks, it gives birth to live young, it is large but usually harmless to humans—but the real takeaway is the reader’s newfound ability to see the shark for more than just its sharp teeth and to appreciate it as a fellow creature of this earth.

By Darienne Oaks
His modest, bright white sailboat gently bobbed on the sparkling turquoise Caribbean Sea under a truly blue sky. Juni’s soft brown eyes glowed in his wizened grandfatherly face framed by curly, snow-white hair. Our hired captain for the day, he tenderly told us that we were going on a very special snorkeling adventure on the living coral reef that runs the length of Belize’s coast.

“Several years ago, I was alone on my boat,” he began his tale. “This day a man in one of the bigger commercial snorkeling boats accidentally speared a nurse shark and threw it back into the water. The big boat sped to another place seeking fish to spear that the crew could cook fresh for their customers’ lunches. I anchored my boat and followed a thin trail of blood in the water to the wounded shark lying under some coral fans. The belly of the shark was swollen. It looked like she was getting ready to have babies. On the next day I came back to see if she was still there. She was and was no longer bleeding. I brought a little food with me and released it into the water between us. She was very wary of me, so I moved back in the water away from her. Eventually, she gobbled up the food. I continued to come each day to feed her.

“One day I found two baby sharks swimming near her. Over the next year I came and visited them often, feeding them, petting them, and playing with them. One of the young sharks swam away and never returned. A month or so later, the mother was gone. I don’t know what happened, but I became good friends with the young shark that stayed.”

“Juni,” I interrupted, not really believing any of his story so far, “how did you know that was the same shark?”

“Well,” Juni informed me, “it ate the food I left in the water and eventually would take food from my hand. After several months of visiting every so often, I noticed this shark’s belly began to swell, and later she delivered two young sharks. They are my grandsharks, because they are the babies of the child of the first shark I helped. These are the sharks we will probably see today. I don’t know what happened to their mother. She, too, disappeared.”

I was having a hard time believing any of Juni’s story but was too polite to say anything more out loud.
“I want you to stay on the boat until I signal for each of you to jump in and swim over to me one at a time. The sharks will approach me first. I do not want you to be afraid.”

Before long we anchored and Juni jumped into the shimmering sapphire water. He swam a short distance away from the boat. Out of nowhere, two adult steel gray nurse sharks, each about three feet long, swam up to him, approaching like happy dogs greeting their owner. Juni frolicked with the sharks in lazy, playful circles a small distance away from our anchored boat, stroking each shark along its sides. He gestured for one of us to jump in and swim over. One girl swam over, reached out, and stroked the sharks.

Very quickly it was my turn. With “show no fear, feel no fear” running in my head, I jumped in and swam to Juni. Immediately he took my left hand in his, pulling my hand in a long single light stroke down one of the shark’s sides. It was thrilling to feel the surprising silky smoothness of its skin, not at all rough or scary the way I thought it would feel. Juni released my hand, and the shark rolled away. We were treading water and Juni said, smiling widely, “Smooth, huh? Very different than other sharks’ skins.”

Then the two sharks, magnificent athletes, twisted with lightning speed in comical zooming spirals all around us. Abruptly, they disappeared.

Way too soon, we headed back toward the boat. I fell into a happy wet heap on its deck, grinning from ear to ear, buzzing with happiness. As I stood up on the deck, though, I felt tight and small inside for not having first believed this gentle shark saver’s story.

We motored our way back in the now still afternoon to his anchorage near the dock. One of the girls asked Juni why he had named his sailboat Trinity. He said, “For the sea, the sky, the earth. They are holy.” Then he transferred us into a little white dingy, which brought us to the dock. The last to say goodbye, I looked into his watery eyes, remembering the shark’s skin under my hand and awkwardly blurted, “Thank you so, so much, Juni. This was an incredible day!”

Slowly I walked alone back down the dock, silently submerged in the feeling of Juni’s unforgettable sea.

AUTHOR’S NOTE: Nurse sharks are slow-moving bottom dwellers and are, for the most part, harmless to humans. Their scientific name Ginglymostoma cirratum means “curled, hinged mouth,” which describes the puckered appearance of their mouths. They can be huge—up to fourteen feet long. Their powerful jaws are filled with thousands of tiny, serrated teeth, and they will bite defensively if stepped on or bothered by divers. Fish, shrimp, and squid are their favorite meals. Unlike most other sharks, a nurse shark’s skin is smooth to the touch.