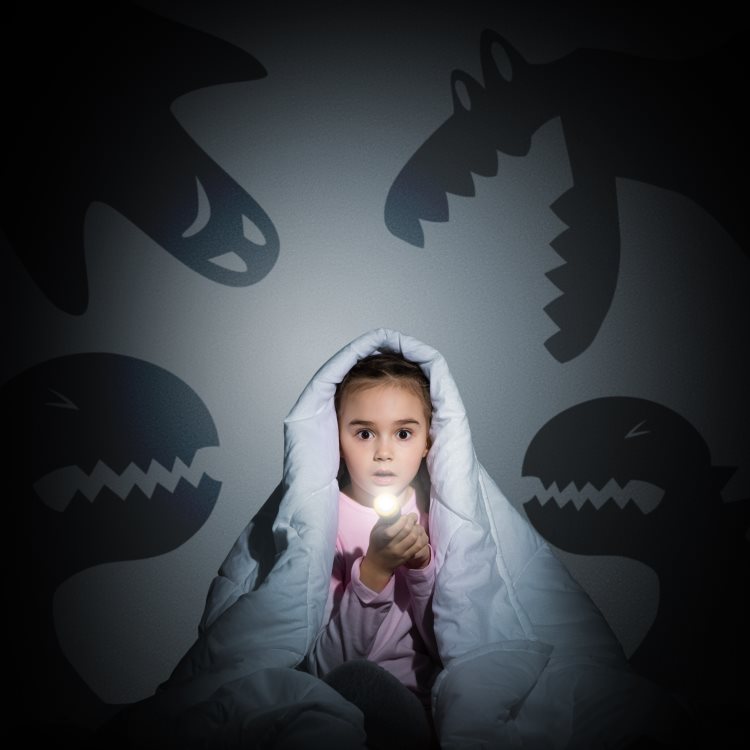 Is Your Child Afraid of the Dark?

A few months ago, my youngest daughter starting wanting to sleep with the overhead light on. I was a little worried about how bright her room was and if she’d be able to get quality sleep, but if I turned off the light after she fell asleep, she’d wake up screaming.  So I talked to her pediatrician. He didn’t seem as concerned as I thought he would be. “If it helps her sleep, let her have it. Pick your battles. She’ll outgrow it. I don’t know of any 30-year olds who are still scared of the dark.”

I gulped, nodded my thanks, and walked out. See, here’s the thing. *I* am a 30 (something) year old who is still afraid of the dark. Not really, but kinda. And I started the same way – sleeping every night with my bedside lamp on. These days, I can sleep in my room in the pitch dark, but if we travel, I like keeping a bathroom light or hall light on and the door cracked a bit. I get claustrophobic when I’m surrounded by dark in circumstances I’m not familiar with. And I didn’t want my daughter to grow up and be the same way. I remember seeking out the bed under the emergency exit light in camp and finding the world’s brightest digital clock for my dorm in college. It’s awkward and embarrassing.

My daughter’s fear was more standard for kids. Monsters. Monsters under the bed. Monsters in the closet. Monsters behind the curtains, in the drawers, and on the top bunk. To be fair, the sister on the top bunk sometimes IS a monster and often tortures her by making monster noises and reaching her hand down the side of the bed. So after reshuffling the bedroom situation, and allowing the younger daughter to sleep alone, we went to work on this fear.

One thing I’ve learned from kid number one is you shouldn’t doubt their fears. They firmly believe there are monsters in their room and you telling them it isn’t true just frustrates everyone. Instead, I wanted to empower my daughter. We whipped up a batch of MONSTER SPRAY, which is basically Febreeze, water, and glitter into a spray bottle. When my daughter hears, sees, or senses a monster, she sprays in the general direction, and this magic potion has the same effect as the riddikulus spell from Harry Potter. First the monster shrinks. Then it burps. Then it pops out in silly colored blisters. Then it farts. Then it turns into a pony on ice skates, or a puppy with ice-cream cone legs, or a kitten with a kite for tail. She’s happy I acknowledge her fear is legitimate, rather than leave her alone to battle her own demons, and I’m happy she’s independently solving her problems.

We did compromise and got her a nightlight (also a big monster deterrent) but it’s dim enough that I don’t worry so much about her sleep quality. We still leave a bathroom or hall light on when we travel (for both of us). And we’ll work on weaning her off those nighttime crutches once she’s past the monster stage. But, in the meantime, the MONSTER SPRAY has made a huge difference. I hear her squirting into the darkness, giggling at whatever image her imagination conjures, and then drifting off for a full night’s sleep. And the best part? Her room smells amazing.

EDITOR’S NOTE: Do you know a kid who is afraid of the dark? Here is a free story from SPIDER Magazine, our award-winning literary magazine for kids ages 6 to 9 about a brave knight with the same problem. Reading about how Sir Fred faces his problem may be just what your child needs to stand up to his or her own fear of the dark. For more stories like this, be sure to subscribe to SPIDER. 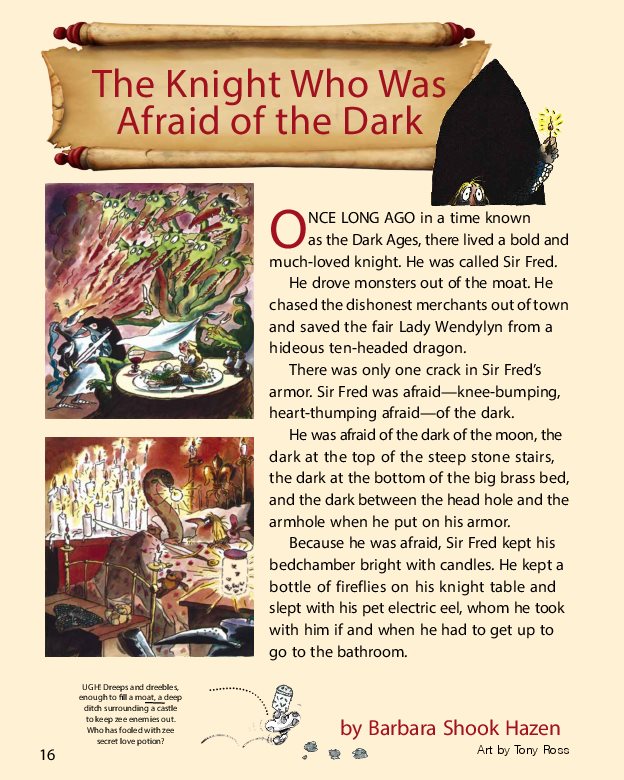 Cricket Media Mama got over her fear of the dark once she saw her electricity bill. It’s way more scary than anything that might be hiding under her bed.

0
PrevGetting Goosebumps About History Thanks to Hamilton
What Makes a Great Magazine for a Toddler?Next