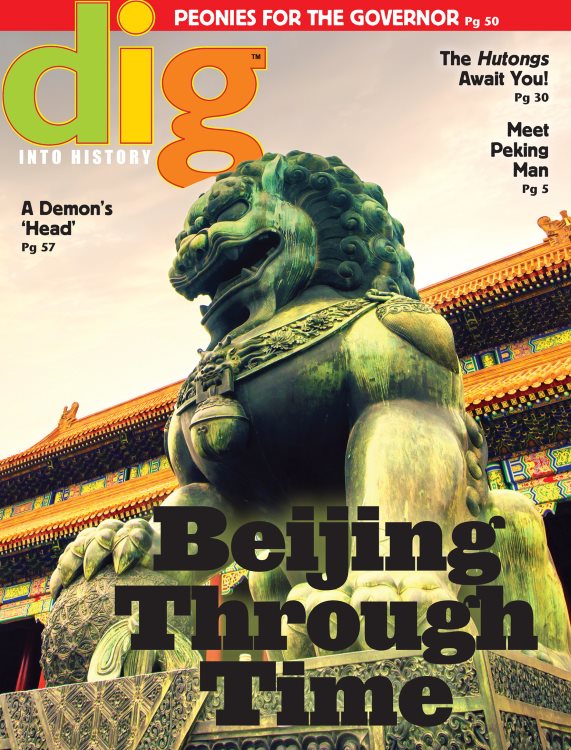 DIG is looking at “Beijing Through Time”

This month in DIG, we are taking a fascinating, engaging, and informative look at the history of China’s capital city of Beijing—from past to present.

Have you ever wondered how an issue of DIG gets put together? Editor Rosalie Baker is ready to tell you:

“For the past few years, I have focused an issue on a city, taking it from its beginning through to the present day. For me, these issues have been fun and a great learning experience.  What would be the city for the 2016-2017 theme list? I had it – Beijing! Beijing definitely ranks as one of the world’s great cities—with a ton of history and fascinating contributions. How to narrow the scores of possible theme topics was the real feat!

“But before I did that, or even before I began listing my thoughts for articles, I wrote to Dr. Margarete Pruech, a German archaeologist and historian who focuses on China and has spent much time there, in a great variety of capacities. Margarete loved the idea of highlighting Beijing in DIG! She also had suggestions for authors and for topics. So, armed with her thoughts and my research, the overarching curve of the issue’s content began to come to me. I would start out with an intro article that would just highlight Beijing and how it became the capital. Then I would go back in time with an article about the find of Peking Man. Then I would feature the key historical sites—not lengthy pieces, but enough to give a sense of past and present.

“But, there were still a few things missing.  In the back of my mind was a topic an author for another issue on China had once mentioned—hutongs. I didn’t have to do much as a few clicks on the computer and the photos and text told me that this was a topic I had to include. And, more important, I had the right author—one who had worked on restoring some of these artifacts.

“Now it was time to head to the Let’s Go Digging section.  I did some research and settled on three sites whose finds were adding much to our knowledge and understanding of ancient China.  But, I still needed an artifact for the inside back cover. I looked through Chinese art books, museum collections, and recent archaeological finds. I don’t want to ruin the suspense, so I won’t give even a hint of my final choice, but it is definitely one of the most arresting images ever to appear on page 57!

“So, yes, I was basically done as far as the decisions about content, but it was actually bitter-sweet. For me, one of the best parts of putting together an issue is the research and decisions that precede the actual work of putting an issue together. But, there is always the next issue!”

Editor’s note: Thanks Rosalie! We can’t wait for the next issue of DIG either. If you feel the same way, be sure to subscribe to DIG.

0
PrevIntroducing Your Sensitive Child to Ghost Stories
Winning and Losing: It Happens to Adults TooNext