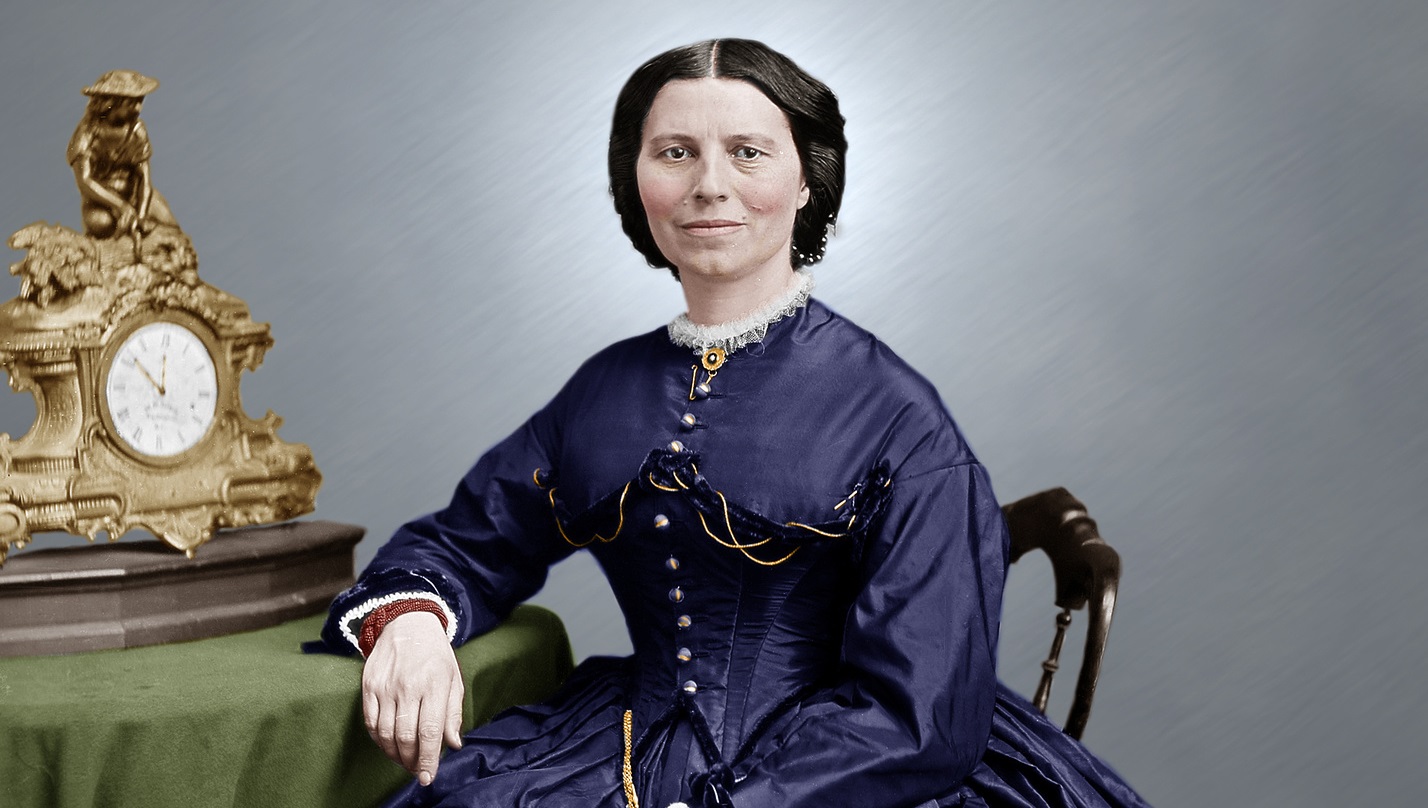 The latest issue of of COBBLESTONE Magazine is all about Clara Barton, just in time for both Women’s History Month and Clara Barton’s 200th birthday later this year! You may know that Clara Barton nursed soldiers during the Civil War and that she founded the American Red Cross, but what else do you know about her life and work? Some of these fun facts may surprise you!

She was born Clarissa Harlowe Barton! Her parents named her after a popular book called Clarissa by Samuel Richardson. The heroine of the novel was a classic damsel in distress, but Barton was anything but! Although she was an extremely shy and sensitive child, she was also eager to learn and help her family.

Her nursing experience started at home

When Barton was 11 years old, her brother David suffered a terrible accident. He fell from a barn roof and injured his head. Although doctors said he would most likely die, Barton was determined to nurse him back to health. She slept on a small cot in David’s room and tended him night and day for almost two years! David Barton recovered and went on to serve as Assistant Quartermaster in the Union Army during the Civil War.

She spent a decade teaching and even opened a school!

Barton became a teacher in order to combat her intense shyness. This recommendation came not from family, friends, or a doctor, but from a traveling phrenologist. Phrenology, no longer seen as real science, is the belief that you can determine information about a person’s character by examining the shape of their skull. While the phrenologist’s advice may not have been medically sound, Barton worked as a teacher for 10 years. She even opened the first public school in Bordentown, NJ. While the school flourished, Barton was insulted when they appointed a male principal instead of her– and even more so when she learned she was to be paid only half of his salary. After all, she founded the school! She quit, saying, “I shall never do a man’s work for less than a man’s pay.”

Barton was a self-taught nurse. While formal nursing education courses did exist before the Civil War, they were not common. Most Civil War nurses were volunteers without much training. That said, Barton did receive an education– just not in nursing. Her sisters taught her to read when she was only three years old, her father taught her geography and military history, and she attended school with her brother Stephen. Although she attended a boarding school for high school, her painful shyness worsened and she became depressed. She even stopped eating before finally returning home. Still, Barton did not lose interest in education. After achieving her teacher’s certificate, she went on to attend the Clinton Liberal Institute in New York, where she studied writing and languages. Her strong writing skills would help her later in life!

She was the first female clerk at the U.S. Patent Office

Barton moved to Washington, DC and became a patent clerk, making her one of the first women to work for the federal government. It was not easy. Although she received the same salary as the male clerks, her coworkers bullied and abused her for three years. Some of them even spat tobacco juice at her. Eventually, she was demoted to a lower position and eventually fired all together when James Buchanan, whose views she fiercely opposed, was elected President. Barton was an outspoken abolitionist, while Buchanan believed slavery was a Constitutional right. She did briefly return to the patent office four years later when Abraham Lincoln took office.

She took up nursing when worlds collided

While Barton was living in Washington, DC, injured soldiers from her home state of Massachusetts began to arrive in the city. She realized she actually knew some of the men! The city hadn’t prepared well for the influx of soldiers and lacked supplies and organization. Barton jumped into action and collected donations, eventually filling several warehouses. From there, she began delivering her supplies to battlefields and personally tending to wounded men. She became known as the ‘angel of the battlefield.’

She had a few close calls on the battlefield

One day, as Barton was giving a drink to a wounded soldier, she felt a strange sensation on her sleeve. She looked down and realized a bullet had passed right through her sleeve. She was unharmed, but sadly, the bullet lodged in the man she was treating, killing him. Another time, a cannonball tore through her skirt on the way to Fredericksburg. In possibly her closest call, she once escaped capture by Confederate soldiers by jumping from a moving horse onto a moving train just as the soldiers arrived. Can’t you picture that scene in an action movie?

As the war wound to an end, Barton realized no unified system existed for keeping track of Union soldiers. Many Union soldiers were released from Confederate prisons, many were hospitalized, while others who had died were buried in unmarked graves. Families did not know whether their loved ones were injured, dead, or newly released prisoners. With personal permission from President Lincoln, Barton set up the Office of Missing Soldiers in downtown DC. There, she and her assistants received over 63,000 inquiries from concerned families. They ended up locating over 22,000 missing soldiers, including arranging proper burials for 13,000 men who had died in the Confederate Andersonville Prison Camp.

If you find yourself in the Gallery Place neighborhood of DC, you might spot Clara Barton’s Missing Soldiers Office Museum! But you may not realize that this museum has only existed since 2015. The city had long since lost the location of her DC office, especially since new development re-labeled street addresses, and in 1996, scheduled the building for demolition. An inspector named Richard Lyons stopped by the site to check up on things and was surprised to find a piece of paper sticking out of the ceiling.

He climbed up a ladder to get a better look and realized it was an old piece of mail stashed in the attic. Curious, he headed to the attic and found a site that had been left almost untouched for over 100 years. There were over a thousand artifacts in the office, including a sign for Clara Barton’s office at the Missing Soldiers Office. Instead of demolishing the building, he and the rest of his agency worked with the National Museum of Civil War Medicine to restore the building and open it as a museum! While you’re in the area, the Clara Barton house, from which she ran the American Red Cross, is located just across the Potomac River in Glen Echo, Maryland.

Barton made some famous friends on a lecture tour

After the war, Barton became a popular lecturer and traveled around the country speaking about her experiences. On the road, she met many other famous faces , including Frederick Douglass, Ralph Waldo Emerson, Mark Twain, and suffragettes Susan B. Anthony and Elizabeth Cady Stanton. She gave over 200 lectures!

Exhausted and stressed after years of hard work and long lecture tours, Barton went to Switzerland for her health. But even there, she couldn’t rest for long! She met Dr. Louis Appa, a representative of the International Committee of the Red Cross. (By the way, the design of the Red Cross logo is an inverted version of the Swiss flag, which is a white cross on a red background. The founder of the International Red Cross was Henry Dunant, who was from Switzerland.) Appa convinced her of the importance of the organization, and when Barton returned home, she spent many years trying to set up the American chapter of the organization.

Many important American politicians didn’t want to believe an organization like the Red Cross would be useful. They hoped nothing like the Civil War would ever happen again. But Barton eventually convinced President Chester Arthur that it would also be helpful during times of natural disasters, not just war. Finally, in 1881, the American Red Cross was open for business. She was 59 years old and it was her 5th career– and she was just getting started.

Though the American Red Cross really became well-known during the Spanish-American War, they got their start helping people in the aftermath of fires, floods, and hurricanes. Southern Texas was famous for its strawberry crops, but the massive Galveston Hurricane decimated the strawberries. When Clara Barton learned about this, she called for massive donations of strawberry plants. The American Red Cross received over 1.5 million donated strawberry plants, allowing Texan strawberry farmers to rebuild! Within two weeks, Texas’s strawberry industry was saved.

Barton lived to be 90 years old

Although she probably would have worked all of her life if she could, Barton was forced to resign from the American Red Cross at age 83. Employees complained of poor leadership and concerns about her age and health. While nobody could deny Barton’s accomplishments, she was not easy to work for. For a time, she even dyed her hair, wore makeup, and claimed she was younger than she was to allay concerns about her heath. Even after her resignation, her career wasn’t over. She founded the National First Aid Society and later published an autobiography at age 86. Barton finally passed away in her Glen Echo home from pneumonia on April 12, 1912. She never married or had children, but lived an independent woman, determined to prove she could do anything a man could.