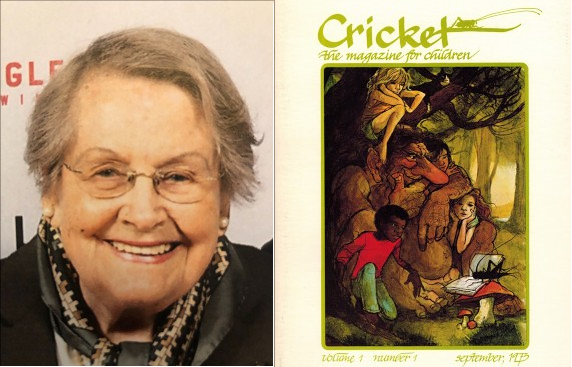 We are saddened to announce the passing of Marianne Carus, founder of CRICKET Magazine, at age 92. The following obituary published by Publisher’s Weekly provides a worthy summary of a remarkable career:

Esteemed editor, publisher, education reformer, and founder of Cricket magazine Marianne Carus died on March 3 at her home in Peru, Ill. She was 92.

Carus was born June 16, 1928 in Dieringhausen, Germany, the second daughter of Dr. Geunter Sondermann, an ophthalmologist, and Elisabeth Gesell Sondermann, and grew up in nearby Gummersbach. She was very proud of her family’s history, which included the work of her ophthalmologist grandfather who was famous for discovering the Sondermann “inner canaliculi,” an important part of the eye’s anatomy.

World War II loomed large over Carus’s early life. Her father was drafted to serve as a military medical doctor in 1939, and in 1944, when Carus was 15, her entire high school class was sent to the western front where the girls were tasked with cooking food for the boys who helped the soldiers dig trenches. By 1949 she had enrolled at the University of Freiburg to study literature, and soon after arriving on campus she met German American graduate student Blouke Carus, who was studying with Nobel Prize-winning chemist Professor Staudinger. Marianne additionally studied French literature at the Sorbonne in Paris. She and Blouke married on March 3, 1951 and moved to the U.S., settling in LaSalle, Ill., where Blouke’s family had established the Open Court Publishing Company and a zinc smelting company in the late 1800s.

In the 1950s as Blouke helped expand the Carus Chemical Company, Marianne raised the couple’s three children while also studying art history and German literature at the University of Chicago. Both parents were “horrified,” Carus told Jessica Csoma of the German Historical Institute, by the simplistic learn-to-read books their oldest son André brought home from school. This concern spurred the pair to change course professionally and they began to develop their own reading and language arts program, which combined phonics with quality stories and poems that would interest readers. The result was the Open Court Basic Readers for grades 1–3, released in 1963, which was a hit with educators.

The Caruses began to field requests from teachers for additional high-caliber literature, but in an even shorter format. Marianne’s research for such content sparked the idea for launching a children’s literary magazine to publish the work of contemporary writers, poets, and artists. She modeled her new project after the famous children’s magazine St. Nicholas, which was started in 1873 and edited by author Mary Mapes Dodge (Hans Brinker; or the Silver Skates). With her contacts in the educational and publishing worlds, Carus soon assembled an editorial board of experts that included Clifton Fadiman, book critic for the New Yorker, as senior editor; advisors Lloyd Alexander, Isaac Bashevis Singer, Eleanor Cameron, Virginia Haviland of the Library of Congress; and art director Trina Schart Hyman. In 1972 a prototype issue containing original work by Sid Fleischman, Nonny Hogrogian, and Singer, as well as a special illustrated greeting from beagle Snoopy by cartoonist Charles Schulz (a friend of Fadiman’s), was mailed to librarians, educators, media, and writers and illustrators for their feedback. The publication also featured an editorial letter called “Old Cricket Says,” and Hyman’s drawings of various creatures—including George the worm and Fat Ladybug—scattered throughout.

In January 1973, Carus celebrated the release of Cricket’s first official issue by hosting a lavish launch party at New York City’s St. Moritz Hotel for all the major players in the children’s book industry. Carus has said that the name Cricket was inspired by a passage from Singer’s memoir A Day of Pleasure in which he recalled a cricket that lived behind a friend’s stove. “It chirped the nights through all winter long. I imagined that the cricket was telling a story that would never end.”

After its debut, Cricket achieved great success, and was widely praised for publishing top quality children’s literature including fiction, nonfiction, and poetry, as well as imaginative illustration, without advertisements. In the 1990s, the family of magazines published by Carus Publishing’s Cricket Magazine Group expanded to include such titles as Ladybug, Spider, Click, and Muse. Carus served as editor-in-chief of the publications for more than 35 years. Throughout her career she held positions in various educational organizations including serving as director on the Association for Library Service to Children board, and as a member of the executive board of the International Board on Books for Young People, as well as being inducted into the Association of American Publishers’ Hall of Fame in 2006.

Children’s book author and editor Marcia Leonard, Carus’s first staff hire at Cricket in 1972, shared some memories of her mentor: “In July 1972, as a recent grad with an independent major in children’s literature, I came across a help-wanted ad for a new children’s magazine,” Leonard said. “I was intrigued and went for an interview. The company’s location in a small town in Illinois was not a selling point, but a few hours into my conversation with Marianne Carus, Cricket’s editor-in-chief, and her husband, Blouke, I knew this was a once-in-a-lifetime opportunity. They asked me to commit to two years, I promised one—and ended up staying six.

“When I began my job as editorial assistant, the on-site staff was Marianne, me, and a parttime secretary. The disadvantage for me: I had no peers and no local friends. The advantage: Marianne had deep knowledge of children’s books, and she was a generous, tireless, enthusiastic teacher, who trusted me with all sorts of tasks most editorial assistants could only have dreamed of.

Over the years, the staff grew to include people who became lifelong friends, I was promoted, and Marianne continued to teach me valuable editorial skills. She was truly a mentor to me and to the other editors. Cricket and its affiliate magazines also offered a wonderful showcase for an amazing group of authors and artists, some of them just starting out in the business. And most important, it enriched the lives of millions of kids. That was Marianne’s goal all along, and she succeeded.”

John Grandits, who came on board as Cricket’s first designer in 1973, and then became the magazine’s art director when Hyman left the position, recalled Carus’s talents as head of the magazine. “I remember Marianne as a terrific editor. She was very open to a lot of different kinds of ideas and types of illustration,” he said. “She stressed bringing in literature from around the world and from different cultures and she did quite a job at acquisitions. Marianne was also a good line editor and knew what made a good story.

As a manager, she knew what she wanted and what her goals were. She very often brought in inexperienced people like me—I had no experience in children’s books, I had worked on scholarly books. She laid down how you acquire, how you proofread, line edit, double-proofing, the traditional, old-fashioned way. She and her husband Blouke taught us how publishing worked. It was an education in how it all goes together, out in this little test tube in the middle of Illinois. They were good teachers.

One of the remarkable things about Cricket is that kids wrote in all the time, sending letters to Old Cricket, and there were writing contests. In traditional publishing you never hear feedback directly from the kids. Two or three times a week we went through a big stack of letters from kids, which was sometimes tough going. But encouraging writing along with reading in this way wasn’t done much in the 1970s. That was all under Marianne’s tutelage. She developed all that and it was a terrific idea.

And she was of course my friend. She and Blouke were great party givers. There was always music and dancing, and the wine flowed easily. They loved putting on skits, they played classical music together. She was a sweetheart, and she will be sorely missed.”

Author Jane Yolen, whose work appeared frequently in Cricket, shared this remembrance of her editor and friend: “Marianne was sharp and kind, always an interesting combination, but she also had a wonderfully wicked sense of humor. Sometimes we giggled like schoolgirls and sometimes we acted like old entitled ladies gazing out at the world with a kind of dyspeptic sarcasm. But most of the time we converged from far away—on the phone mostly—discussing not only pieces of mine she wanted to publish, but the world of publishing in general. I miss that kind of conversation these days. Measured, passionate, informative, deep.”

Author-illustrator David Wiesner is one of the many children’s book creators who can trace their career start to Cricket. “Cricket was a formative place for me. This entity that Marianne created attracted a staggeringly wide range of incredibly talented people, both working at the magazine and the people they hired to do work for the magazine. Aside from the opportunity it gave me as an artist, it was so great to get to know that community. And Marianne was like the mother of the whole group. She was an incredibly sweet, loving, outgoing, delightful person to be around. And she seemed, I think, as thrilled by that community as everybody else did. Many of those people would become lifelong friends. Even as people changed at the magazine, new and interesting people came in and continued to attract remarkable artists and writers to work for them. I don’t even know what to compare it to in children’s books. It was a truly unique institution.

My very first job [in 1979] was doing a cover for Cricket magazine. I met Trina Schart Hyman at the end of my senior year at the Rhode Island School of Design. She came up to talk and was looking at portfolios. I showed her my stuff and we had this great talk and she said, ‘How would you like to do a cover for us?’ David Macaulay, one of my teachers, had just done one, and another of my teachers had done one. It was unreal. I thought, ‘Did that really happen?’ It launched me into children’s books and led to my next number of jobs, which were working for Open Court Publishing. It was like my post-doc year or a crash course in being a professional illustrator. I did two other Cricket covers. The second one was the direct inspiration for what became Tuesday, which I won the Caldecott for. I did a third cover later, which over a much longer time became a book, Mr. Waffles, in 2014. Cricket has always been this remarkable touchstone and it was great to have Marianne at the center of it.”