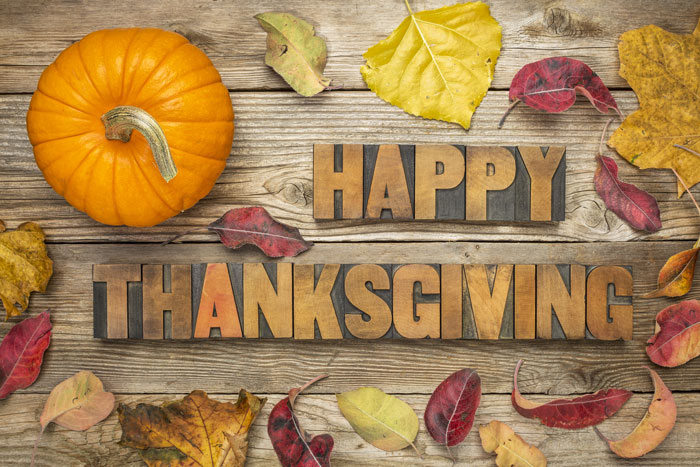 A Literary Thanksgiving Feast for your Family

While you are waiting for the turkey to get perfectly browned, the potatoes to get soft, the drinks to get cold, and the football game to begin, why not settle down with your favorite kids and enjoy this smorgasbord of Thanksgiving treats from Cricket, including a poem appetizer, a non-fiction main course, and a narrative dessert. It’s the perfect start to a perfect Thanksgiving Day. 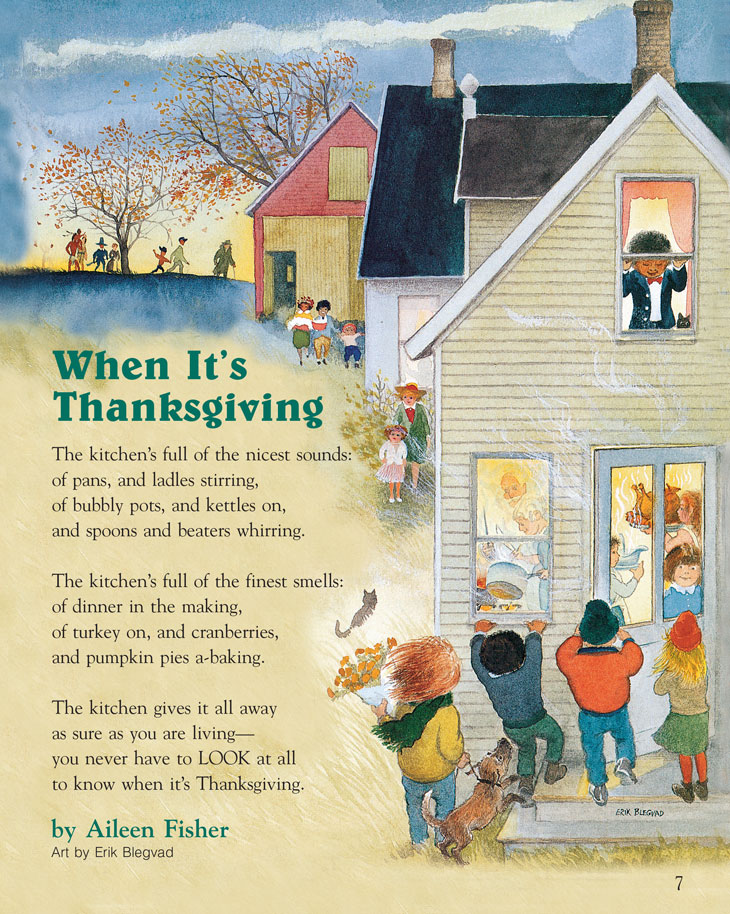 THE YEAR OF TWO THANKSGIVINGS
by Bianca Lundien Kennedy 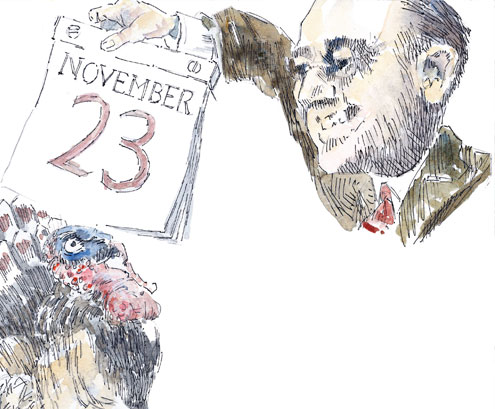 IN 1863, PRESIDENT Abraham Lincoln issued a proclamation stating that Thanksgiving Day would be observed on the last Thursday of November. This tradition continued for 76 years, until 1939. That year, November had five Thursdays, causing Thanksgiving Day to fall on the fifth Thursday, November 30th, only three weeks before Christmas.

That August, many business groups urged President Franklin D. Roosevelt to move Thanksgiving Day up a week, allowing more time for Christmas shoppers to boost sales. “It is an established fact that Christmas buying begins vigorously every year in the retail stores the day following Thanksgiving and that the Thanksgiving to Christmas period is the busiest retail period of the whole year,” read a letter to the president from the Downtown Association of Los Angeles. Many more letters followed suit.

Compelled by the merchants, President Roosevelt granted a proclamation in 1939 that declared Thanksgiving Day be moved to 23 November, the fourth Thursday of the month. Many Americans were appalled by the president’s tampering with tradition, and thousands of letters poured into the White House in response to the date change of Thanksgiving Day. “After all this country is not entirely money-minded, we need a certain amount of idealism and sentiment to keep up the morale of our people, and you, would even take that from us,” stated one such letter.

In addition to angry Americans, the president heard from calendar manufacturers, whose calendars had been produced years in advance. “I am afraid your change for Thanksgiving is going to cause the calendar manufacturers untold grief. If very many customers demand 1940 calendars to correspond with your proclamation, hundreds of thousands of dollars will be lost . . . ,” John Taylor from The Budget Press wrote.

Students protested the change to their traditional football game schedules. New York University’s Board of Athletic Control issued a letter to the White House stating, “As you probably know, it has become necessary to frame football schedules three to five years in advance, and for both 1939 and 1940 we had arranged to play our annual football game with Fordham on Thanksgiving Day, with the belief that such day would fall upon the [final] Thursday in November.”

Schools, businesses, and the population in general suffered from disruptions stemming from the changed holiday date, particularly in regard to the scheduling of vacations. Some governors defied the proclamation, and their states upheld the traditional date, creating confusion. Depending on where someone lived, the holiday was celebrated on either the twenty-third or the thirtieth. Thus, some families were unable to celebrate

Thanksgiving Day together. Such was the case for people whose family members resided in neighboring states but received vacation time for Thanksgiving in two completely different weeks!

An unyielding President Roosevelt continued to observe Thanksgiving Day on the second-to-last Thursday of November for another two years, but continual public outcry hounded the president and his administration. A letter from one man, Shelby O. Bennett, had a few “suggestions” for the president:
&nbsp:

“I see by the paper this morning where you want to change Thanksgiving Day to November 23 of which I heartily approve. Thanks. Now, there are some things that I would like done and would appreciate your approval:

Spurred by letters such as these, Congress passed a law on 26 December 1941, stating that Thanksgiving Day would fall on the fourth Thursday of November every year, ensuring that all Americans would celebrate Thanksgiving on the same day—something we can all give thanks for this Thanksgiving! 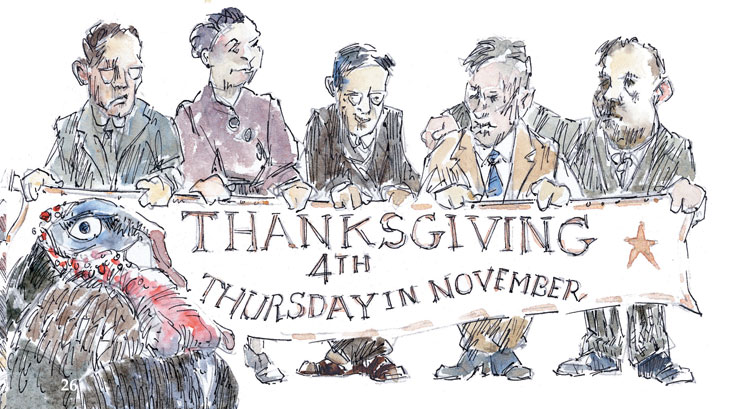 And now for dessert: 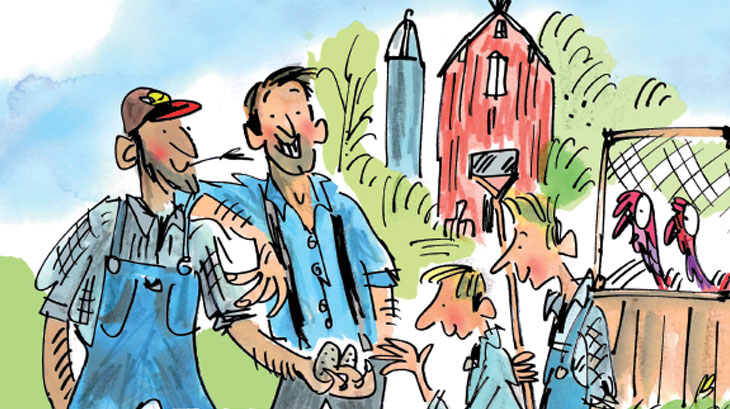 IT ALL BEGAN when my younger brother, Chris, and I went over to Aunt Barbara and Uncle Howard’s for Thanksgiving. My aunt and uncle live on a farm at the opposite end of town, and Chris and I love going there.

We live on a farm, too, and we had to do the morning chores before we left. When we finally got to my aunt and uncle’s, Chris and I went outside to see if Uncle Howard needed help with anything. He and Dad had decided to clean out the turkey coop before dinner. Since Chris was only nine, he got the easier job of scrubbing out the watering cans. I was twelve, old enough to help load the wheelbarrow. But we still found time to ask Uncle Howard a lot of questions about turkeys. He must have been impressed, because when we were finished, he winked at my dad and handed me two turkey eggs.

“You kids put those under a setting hen,” he said, “and in twenty-five days, you’ll have a
couple of fine turkeys!”

Chris was so excited that he nearly dropped his egg on the way to the house. We both stuffed ourselves at dinner and then couldn’t wait for the grownups to finish talking so we could go home and tend to our eggs.

Dad put the eggs under an old hen, and every day Chris and I would check to see if they’d hatched yet. Twenty-five days seemed like forever. Finally, on the twenty-sixth day, Chris and I walked into the coop after school to find the old hen scratching on the floor. Behind her waddled two balls of fluff, falling over their feet and looking sort of bewildered. 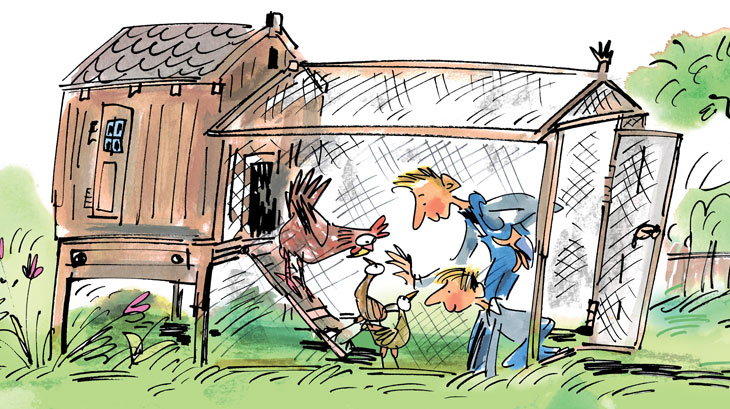 It wasn’t long before the chicks lost their fuzz and began growing feathers. The old hen would peer at her two odd-looking chicks, obviously puzzled as to why they looked so different from her other babies. When they got older, we could tell that they were both toms. Chris named one Bill, and I named the other Timothy.

I don’t know what happened, but one day we found Bill dead beside the coop. Chris felt terrible. I told him that from now on, Timothy belonged to him, too.

Timothy grew and grew, gorging himself on the feed we threw out. He stayed mostly to himself, ignoring the chickens. He liked to wander in the woods and find tasty berries and weed seeds. Mom kept telling us not to get too attached to Timothy, because we were going to have him for Thanksgiving. But we never paid too much attention to what that really meant.

Then, one day toward the end of October, Dad penned Timothy up and gave Chris and me instructions.

“I want you to start giving him corn along with his regular feed,” he said. “We want a nice, plump bird for Thanksgiving.” After Dad turned and walked away, Chris’s face began to pucker, just as it does before he starts to cry.

“Why don’t we give him away?” Chris suggested.

“No,” I said. “If we do, he’ll just end up on someone else’s Thanksgiving table.”

“What if we take him out in the woods?”

“He always comes back at night,” I said. We both sighed.

Suddenly I had an idea. “Hey, Chris, you know that small cave in the woods?” Chris nodded. “We can take Timothy there. We’ll cover the entrance with chicken wire and hide him till Thanksgiving is over.”

“Yeah!” We were so excited, we jumped up and gave each other high-fives.

The next day after school, we let Timothy out of his pen and herded him through the woods. We left him in the cave with an old peanut butter can filled with water, and plenty of food. We piled brush over the opening to hide the entrance.

Nobody missed Timothy for a couple of days. Then Dad sent us out in the woods to look for him. Both of us felt guilty, but we wanted to save Timothy’s life, so we kept quiet. After a day or two, Dad decided that a fox must have gotten him.

The next day a big snowstorm hit. Even Dad stayed in the house except for feeding the livestock. It was days before we could get out and see Timothy. When we got to the cave, we saw right off that something had happened. The chicken wire was pulled away from the opening, and Timothy was gone. 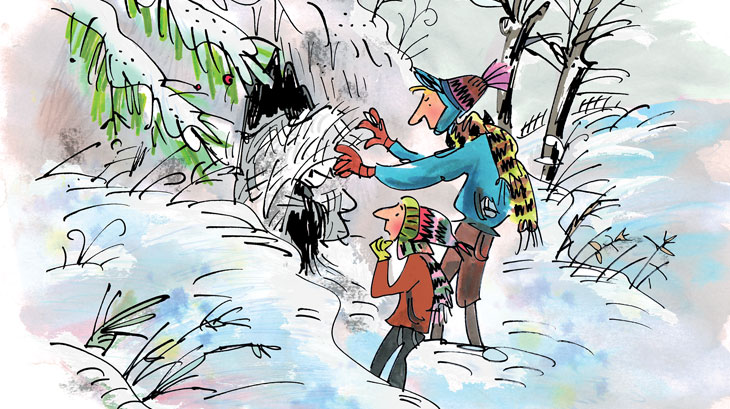 Chris’s face began to pucker. “A fox got in and killed him,” he yelled.

“No. There aren’t any feathers,” I replied. “Look at the wire, how it’s bent outward. Timothy pushed against it so he could get out and search for food.” We sat there for a while wondering what had become of him.

We were pretty quiet when we got home. Finally Mom asked, “What’s the matter with you two? You look as though you’ve lost your best friend.” That was the wrong thing to say. Though I hate to admit it, my face began to pucker up, and suddenly my throat hurt. When Mom saw I was about to cry, she sat us down, and we told her everything.

We worried about how Dad would take it, but he wasn’t too angry. He seemed to know that all kids do some crazy things when they’re growing up.

Dad reassured him. “Now, don’t worry about that old bird. He knows enough to be able to find food. He probably loves being a wild turkey living in the woods.”

As spring approached, the snow began to melt. One day Chris and I were checking on the setting hens when we heard Mom holler. She’d been planting in the garden, and we took off running to see what was wrong.

“Look at that! It’s Timothy!” she cried.

Sure enough it was, and he’d brought company, a pretty little hen turkey. He strutted around the yard awhile, fluffing out his tail feathers and proudly showing off his home to his sweetheart. Then he ushered her over to his old coop, and they began scratching in the dirt.

Timothy was home to stay, though he’d never let us get too close anymore. We named the turkey hen Florence, and before long she laid a batch of eggs that hatched into ten fluffy chicks. We made pets out of some of them. 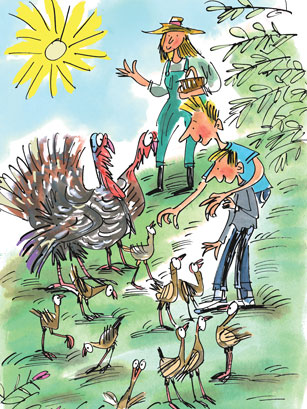 Every year since then we’ve raised a bunch of turkey chicks, and each year one of them has been our Thanksgiving dinner.

Dad always gets a kick out of telling the whole story to everyone at Thanksgiving. “We are indeed fortunate to have this bird here today,” he proclaims. “Especially since it grew up on a farm with a couple of professional turkey savers. Thank you, Chris and Bryan. And thank you, Timothy!”

10
PrevLive From Lego League
Giving “The Talk” About Cyber ShoppingNext