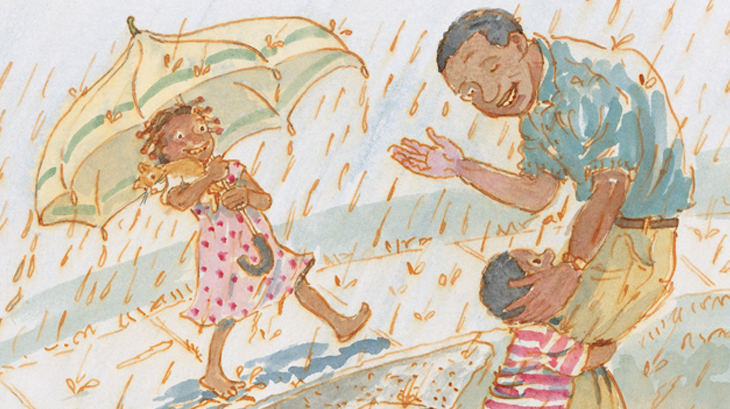 A Story for Kids Who Feel Too Small

My daughter has never cracked the pediatrician’s growth chart. In first grade, she was sometimes called a baby by the other kids, and in truth her height was not all that much more than an average-sized 3 year old. Then she got into trouble for having her classmates lug her books, homework, and lunchbox around school like personal valets. They had enjoyed carrying her piggy back because she was so small, and she saw an opportunity to expand their babying into courier service. Part of me had to respect the opportunism, but part of me was troubled by the way she’d begun to let her size define her sense of self.

Then she had a wonderful second grade teacher, who happened to be small in stature, who taught her all about having “a big voice” and remembering that “the best things come in small packages.”

My daughter has inched steadily taller over the years (and has become an avid public speaker), but her arc persists on its independent path across the official height graph. It hovers just below 0%. How strange to be labeled as less than zero. And how important for me as a parent to raise a girl labeled as small into someone fully her own, powerful self. To counteract the messages she takes in from the world each day, we have spent much time focusing on wearing her size with pride, defining what makes her shine, and learning how to deal with the haters.

If a wonderful child in your life is grappling with what it means to have a pint-sized frame, you understand. If you have a child that some would call too thin, too fat, too tall, or just too much or too little of something, then you understand as well. It’s painful to see children forming their own sense of identity even as their differences are cast as a liability. How do you help nascent souls embrace who they are and what makes them unique?

At Cricket Media, our mission is to do just that. We tell stories that respect the perspective of children and inspire them to know their own strengths, build confidence, spark creativity and love their unique selves.

Here’s part of a story from a recent Ladybug Issue – “Tall Enough” — that shows a fresh way to look at size. It’s close to my heart because it shows being small can be the right size to be a hero.

One Saturday, Andy’s great-aunt Arlene, from Tupelo, Mississippi, visited. When his mother left the room for coffee and cookies, Andy began telling Auntie about his pet turtle. The great lady’s knees ignored him. She continued her conversation with his mother, her words flapping over Andy’s head into the kitchen.

Andy stood on a chair so he and his aunt could see each other. At the same time, his mother came back.

“Andrew Wilson Benny!” she said. “You know better than that.”

Andy jumped from the chair. “Being short is the pits,” he muttered as he stomped down the hallway to his bedroom. “If knees had ears this would be a better place.”

Then his sister Alesha came running up to him. “Patches ran into the drainage pipe and won’t come out.” Andy followed Alesha to the driveway where his father stood peering into the pipe.

Andy got down on his hands and knees and had a look. Patches stared back at him, wide-eyed, and meowed.

“She’ll come out when she gets hungry,” his father said.

Andy stood to his full height. “I can get her, Dad,” he said.

His father hesitated. “All right. OK. But be careful.”

Andy dropped to his belly and stretched into the opening. “Here I come, Patches,” Andy told the kitten.

Andy reached Patches and gently picked her up with both hands. “I’ve got her!”

Alesha took Patches from him. His father put a hand on his head. “That was good work, Andy.”

“Yeah,” Andy agreed. “I was the right size to do it.” He grinned up at his father’s nose and hugged his knees.

It’s painful to see children forming their own sense of identity even as their differences are cast as a liability. How do you help nascent souls embrace who they are and what makes them unique?

0
PrevTeaching Competence: Could it all start with socks?
Helping Kids Face Their FearsNext