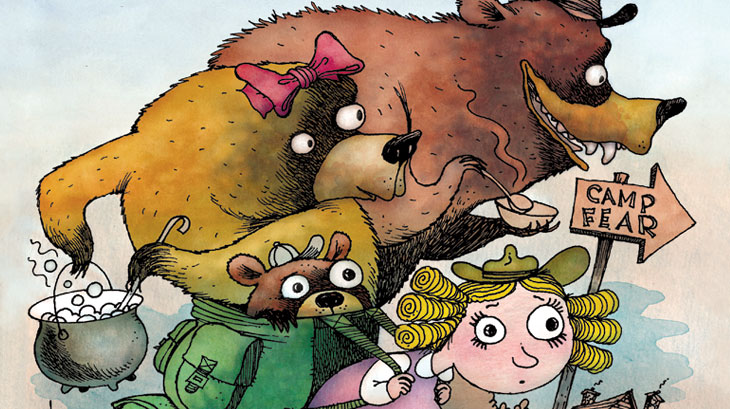 My nephew is terrified of bugs. Small ones marching across the sidewalk make him stop in his tracks and a friendly buzzing bee once chased him off an amusement park ride we had waited an hour on line to get to ride. So when we started planning a multi-family camping trip (3 days in the woods in tents), my sister-in-law was understandably concerned.

We all know that fear is a powerful emotion that is only minimally affected by logic or diminished by hugs from mom and dad. And we also know that facing our fears is often the only way to conquer them. They do not go away on their own. In fact, they only get larger and larger the longer you let them fester in your head. And that’s why when my sister-in-law wanted to pull out of the trip (or rather, remake it into a beach vacation featuring far fewer creepy crawlies) I persuaded her to stick with the original plan.

But I don’t blame my sister-in-law for wanting to help her son avoid his fears, and just like her, I didn’t want to head into the wild with a fearful kid without giving him the support that would allow him to ignore the bugs and enjoy himself. First I got some advice from a friend with a child also working through some fears of her own. My friend suggested we present it as a challenge to be overcome in an orderly step-by-step manner with the camping trip as the “final exam.” This suggestion really worked for us. It appealed to Dylan’s innate need to get instant gratification as each small task was accomplished and positioned him to be excited about the final exam, also known as 3 days in the woods, where there were bound to be insects of all shapes and sizes.

Being a writer, I naturally turned to fiction stories and nonfiction articles as several of the steps in our process. And I was not above laughing at the irony of working for a media company named after an insect, featuring magazines full of creepy crawlies, as a way to decrease a child’s fear of bugs. Quite the opposite in fact. I mean, where else would I find a repository of high quality fictional stories perfectly positioned to help a child face his fears? As it turned out, the perfect story was in the current issue of Cricket and it featured a character heading off to camp in the woods to face her own fear. The story is called “Goldilocks Goes to Camp.” The characters in this story also use a step-by-step approach to face their fears and eventually realize (as I hope Dylan eventually will) that when you come face to face with what you fear, it is often not nearly as scary as your mind made it out to be. I hope you enjoy this excerpt of the story as much as Dylan and I did. For more great stories like this, be sure to subscribe to Cricket.

I was not above laughing at the irony of working for a media company named after an insect, featuring magazines full of creepy crawlies, as a way to decrease a child’s fear of bugs.

“You’re sending me where?” Loxie wailed.

Her parents exchanged a glance. “Fear Camp, sweetie,” her mother said. “To help you deal with the, er, aftermath of the Bear Incident.”

“You mean the bad dreams?” Loxie said. “Lots of kids have bad dreams.”

“Nightmares, dear. Yes, other kids have them, but you have them every night. And then, there’s your…phobia.”

“Lots of kids give up their teddy bears at my age!” Loxie said indignantly.

“But not because they’re afraid of them,” her father said. “Fear Camp is just what you need. It will help you work through what happened.”

“Work through it? I don’t even want to think about it.”

“Well, it’s either camp or spend the summer here,” her mother said firmly. “I hear the neighbors have invited friends to visit. A Mr. and Mrs. Bear, and their little Baby Bear.”

On registration day, Fear Camp buzzed with boys and girls. All wore T-shirts sporting the camp motto: Face Your Fears. After Loxie’s parents helped her find her cabin and kissed her goodbye, she joined her cabin mates. They were sitting in a circle on the bunkroom floor. “I’m Loretta, your counselor,” said a girl wearing a scarlet hoodie over her T-shirt. “But you can call me Retta. Or just Red.”

She explained a few rules and then set her clipboard aside. “Now, to get to know each other, let’s share something we’re afraid of. I’ll start. I’m afraid of wolves and of visiting my grandmother.”

One by one, they went around the circle. One camper was afraid of giant gingerbread boys, another of being lost in the forest, and another of amphibians (she’d once been turned into a frog by a mean-spirited fairy).

When it was Loxie’s turn, she said, “I’m Goldilocks—call me Loxie—and I’m afraid of bears.”

“Thanks for sharing, Loxie,” Red said. “Admitting your fear is the first step toward overcoming it.”

“What’s the second step?” asked the girl next to Loxie. She was afraid of spinning wheels.

Fear camp was hard work. Each day, the campers rose early for physical training. “A healthy mind requires a healthy body!” Red often said. “And if you ever meet a big, bad wolf in a forest, being able to run a five-minute mile can’t hurt either!”

After training came breakfast, then journaling, and after that came Fear Facing. Each day, it met in a different place: The kitchen, where they made miniature gingerbread boys—“They don’t sing, and they can’t run. You can even bite their heads off, if you like!” The forest, where they learned basic orienteering skills—“Use a compass to find your way. There’s no need to depend on breadcrumbs.” And at the pond, where they caught, and released, frogs—“Go ahead, kiss it. Most frogs aren’t enchanted.”

Loxie had little trouble with these activities. But on the day she was scheduled to face her own fear, she could hardly eat.

Between tiny spoonfuls of breakfast porridge, she nervously repeated her truth statement.

“Teddy bears are cute and fluffy. They cannot hurt me.”

From across the table, Gretel threw her a sympathetic look. “Your turn today?”

Loxie nodded. “I feel so silly. I mean, who’s afraid of teddy bears?”

Gretel shrugged. “Who’s afraid of hiking in the woods? Who’s afraid of candy canes and sour balls? I am. So what? Everyone’s got fears. The point is, you’re here doing something about it.”

During Fear Facing that day and the following days, Loxie progressed from petting her teddy bear, to holding it, to cuddling it. One night, she took it to bed and didn’t have a bad dream all night.

“I’m cured!” she told Red the next morning.

“Well, not quite. You’re not afraid of teddy bears anymore,” Red corrected. “That’s great, but your real fear is bears—live ones. We still have to work on that.”

Loxie thought back to that dreadful day. She’d become separated from her Forest Explorers troop while hiking. For hours, she tramped through thickets and splashed across streams until she felt like collapsing. And then the little house appeared. She knocked, but no one was home. Desperate for a drink of water, she went inside, and the porridge and fire-warmed chairs and comfy beds were too much to resist. But then she’d awoken to that face—that furry face with its glistening snout and tiny, sharp teeth—only inches from her own. She’d screamed and screamed—

“Sorry,” Red said gently. “You were having a flashback.”

Loxie sighed. “I guess I do still have some work to do.”

Two weeks later, at twilight, Red gathered everyone around the fire pit for a sing-along. “I’m proud of you,” she said. “Tomorrow you’ll graduate from Fear Camp.” She cleared her throat. “If you pass your final test.”

“What do we have to do?” Hansel asked.

The campers stared at her, mouths open.

“Now?” Loxie cried. “But it’s dark. And wild animals live in there.”

“Remember our motto?” Red said. “This is the last step toward facing your fear.”

Single file, the campers followed her down a path that wound around gnarled oak and shadowy pine trees. An owl hooted, while further away, a wolf howled. The moon made creepy shadows on the path, and the wind moaned through the tree tops.

“How much longer?” A camper asked in a hushed voice.

“Do you think we’ll have to find our way back alone?” Gretel whispered to Loxie.

“Maybe,” Loxie answered. That would be scary, but not nearly as scary as facing a bear. She had a feeling that’s what she was going to have to do.

Clouds hid the moon; Loxie could hardly see Red’s outline in front of her. Finally, the counselor stopped.

In the dim starlight, she made out a tall figure. It was wearing a baby-blue cap and had a long, furry snout.

“Oh, that’s OK then,” Loxie sobbed hysterically. “We’ll be eaten by a wolf instead of a bear.”

“Hush.” Red threw the wolf an apologetic look. “This wolf is safe. I know him.”

Red turned her flashlight on. The wolf waved. Behind him stood a group of wide-eyed campers dressed in T-shirts and caps just like Loxie’s. Except these campers weren’t human—there was a pig, a young witch, a life-sized gingerbread boy, a fairy, and, at the end of the line, a small bear. He was staring straight at Loxie and trembling.

“I know him!” Loxie cried, too surprised to be afraid. “He’s the one that scared me at the bear’s cottage. What’s he doing here?”

Loxie glanced at the bear again. He seemed to be sucking his paws. And was he whimpering, too?

After the astonished campers had asked all their questions, Red and Harold (who was surprisingly funny for a wolf) handed out maps and trail mix. Just as Gretel had predicted, they had to find their way back to camp. But not alone—each human camper was matched with a nonhuman camper.
Loxie, of course, was paired with Baby Bear. After the first few, awkward minutes, during which Loxie apologized for breaking into his house, and Baby Bear said he was sorry for scaring her (“I’d never seen a real, live girl before. That’s why I got so close!”), they got acquainted. They discussed their families, their favorite music, and food. Both loved porridge, and both preferred it at medium temperature with lots of brown sugar and a touch of cream.
When they arrived back at camp, the sun was rising. Red presented each camper with a certificate of achievement and then everyone headed to the mess hall for a huge breakfast.
Afterwards, Loxie invited Baby Bear to see her cabin. They were heading out of the mess hall when Red stopped them. “Be back here in fifteen minutes, you two,” she said. “Big day ahead.”
“But I thought we’d done everything we needed to graduate,” Loxie said.
“You have,” Red said, with a wicked glint in her eyes. “Now it’s time to celebrate. We’re going bungee jumping.”