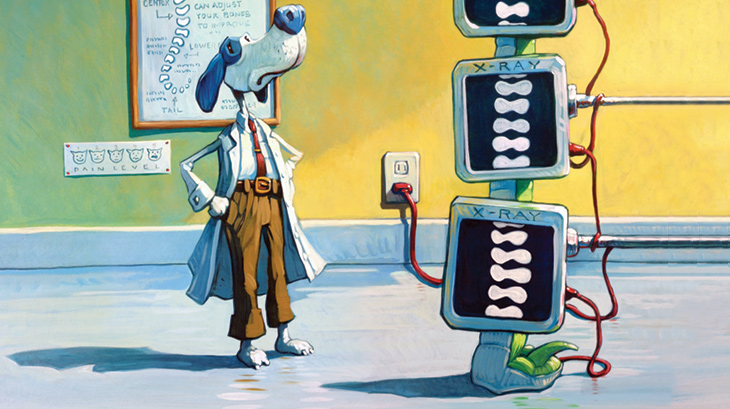 Expanding a child’s view of what is possible is like opening up a window or turning on a light that has the power to spark their imaginations and help them dream even bigger dreams. I was reminded of this recently when I overhead the girls in the Girl Scout Troop I lead discussing what they would like to be when they grow up. This was a peer led discussion stemming from one girl’s announcement to the group that she had auditioned for the Washington National Opera and intended (at the ripe old age of 9) to become an opera singer. Quickly the other girls chimed in with their future aspirations: doctor, store clerk (she liked the way they get to scan things), ballerina, artist, soccer player, and teacher.

One of the things we aspire to do for children is to help them imagine what is possible. I guess that’s why I responded so strongly to an article in a recent issue of Spider about a chiropractor who isn’t your usual kind of back cracker. While he does help people improve their back health, he also works on animals of all kinds from dogs to horses to hummingbirds. Did you even know such a job existed? I sure didn’t. And I’m sure none of the girls in my Girl Scout troop did either. It made me wonder what kind of jobs they would have picked if they knew the huge range of professions that actually exist out there in the world. Would they still want to be doctors, ballerinas, and soccer players, or would they aspire to be something out of the ordinary?

It made me wonder what kind of jobs they would have picked if they knew the huge range of professions that actually exist out there in the world. Would they still want to be doctors, ballerinas, and soccer players, or would they aspire to be something out of the ordinary?

You’ll find the story Animal Cracker below. I hope you’ll share it with the children in your life. Perhaps it will be the spark that ignites their interest, points them in a new direction, and inspires them to dream about their futures.

Zoey was born with bad knees and crooked hips, but she doesn’t let that slow her down. Like most Boston terriers, she seems to live life at 100 miles an hour.

Until Dr. Dave lays his hands on her, that is. He pushes gently on Zoey’s backbone and prods her hips into place. Instantly she becomes calm and still, like a dog statue.

Sometimes called “back-crackers,” chiropractors use pressure to adjust the bones of the back and major joints. If the bones are not lined up properly, they can cause severe pain.

Most chiropractors work on people. Some, like Dr. Dave, have branched out to animals.

“My human clients started asking if I’d check their animals,” he says.

Many people come into Dr. Dave’s office in Pittsburgh, Pennsylvania, for lower back pain and end up coming back with their pets. Dr. Dave’s clinics at dog shows and horse farms are so popular that he spends many hours a week traveling.

“I love what I do,” Dr. Dave says. He finds treating animals easier and more rewarding than treating humans. “Animals respond much faster than people. They sense your energy as soon as you put your hands on them.”

Although he works with animals, Dr. Dave is not a veterinarian. Some states do require animal chiropractors to be veterinarians, but few veterinarians have the necessary training. With 17 years of experience and 300 hours of graduate study, Dr. Dave is certified by the American Veterinary Chiropractic Association.

His animal clients are mostly dogs and horses, but he is often called to help out at a local wildlife rehabilitation center. He has adjusted everything from a hummingbird to a turkey vulture.

After a red-tailed hawk flew into a tractor-trailer, it couldn’t perch properly or eat. Dr. Dave was called in to treat the injured bird. He adjusted several lower vertebrae and the lower mandible joint, or jaw. By the next day, the hawk was perching and beginning to eat normally.

Young animals can benefit the most from a chiropractic session. Puppies may be born with spine or hip problems from being crowded in with all their littermates.

“If you adjust their spines early, you help them avoid back and hip problems later in life,” says Dr. Dave as he adjusts a 12-week-old Labrador retriever puppy. The puppy plops right down, obviously content.

An older Gordon setter is up next. “Gordo” is one of Dr. Dave’s regulars. He has some hip problems, his owner says, and the chiropractic treatments have kept him from needing painkillers and surgery.

Like all professions, animal chiropractors face some risks. Dr. Dave’s human clients are not likely to bite him, but two of his canine clients have. One had just come from a shelter and wasn’t used to people. The other seemed ready to bite anything, and Dr. Dave happened to be handy.

Most animals take to the treatments very well. It doesn’t hurt them—in fact, it usually relaxes them. Rocky, a horse that Dr. Dave treated, became so relaxed he almost fell over as he was being led away.

After only a few minutes with Dr. Dave, Zoey the Boston terrier is good to go. She bounces off the table, ready to climb a mountain—or at least a tall pile of hay bales.

0
The Strange But True Obsessions of Two Great InnovatorsNext