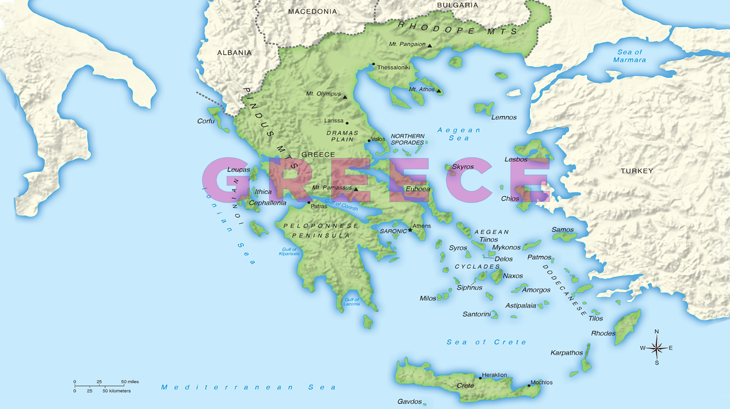 What Greece Can Teach Your Child About Financial Literacy

There’s been a lot of talk in the news lately about Greece and its financial troubles. Scary words like recession and unemployment and default are used endlessly by newscasters and commentators, and to a child listening in, I’m sure it is both confusing and ominous. Especially with the U.S.’s financial crisis so recent (and still being felt by so many), it would be normal for a young person to wonder if what is happening in Greece could happen here and what the ramifications might be for his or her own family.

However, unless you hold a degree in finance (and perhaps even if you do), the troubles in Greece can be hard to explain to yourself, never mind to a child. Financial literacy is a topic most of us have learned on the fly and the terms that accompany this knowledge are often discovered only by filling out credit card applications or applying for mortgages. Even then (and I’m speaking from experience here), some terms and their effects are unclear. I would be hard-pressed for example, to explain to my daughter what interest rates have to do with inflation or what all the new banking regulations might mean to my daily banking habits.

Luckily, a wealth (like my pun?) of resources exists to help you help your child understand finances, financial literacy, and what is happening in Greece. One of my favorite sites is Investopedia, where they have an entire section on teaching financial literacy to kids. Another excellent resource is moneyasyougrow.org, which was recommended as an initiative of the President’s Advisory Council on Financial Capability. And then, of course, there is Cricket Media, where virtually all of our magazines have focused on money in some way or the other over the past few years, including the article below which appeared in Cobblestone, our history magazine for 9 to 14 year olds. Told from a family’s personal perspective on the recent financial crisis, this story will help your child gain a working knowledge of some of the issues involved while providing them with a blueprint to keep their own finances in the black. And who knows, you might learn a few things too.

Kerry always felt lucky. But then her mom got laid off and Kerry stopped getting an allowance. When her dad’s work hours got cut back, too, the family had to move to a smaller home. Kerry now shares a bedroom with her sister. Her family won’t be going on vacation this summer. And Kerry worries about how she will afford college, too.

While Kerry is a fictional character, many real teens face similar dilemmas. A downturn in the U.S. economy has left more than 1 in 10 Americans unemployed. Calculations by the National Academy of Sciences suggest that nearly 1 in 6 Americans live in poverty. For example, a family whose yearly income is less than $20,000 would be in this category. The recent crisis came into the national spotlight starting in 2007. But its roots reach back over decades. Average Americans as well as financial experts wonder why things went wrong and what will make them better.

“In this particular case, the financial crisis was caused by too many people having too much debt,” says Raj Aggarwal, a finance and business professor at the University of Akron in Ohio. “Money was easily available and was cheap.” So, it was easy for people to get loans. And interest rates were falling. Many people spent more money than they earned and built up debts.

Equity lines of credit also encouraged mounting debt. A family could borrow against their home’s equity, which is the value of a house that results from a family’s initial down payment and the monthly mortgage payments minus whatever is owed on existing mortgages. The equity line of credit could be used to remodel, pay for college, or even take vacations. The home became collateral: If a person couldn’t repay the borrowed money, lenders could seize and sell the home to pay the debt. But as long as interest rates kept falling and housing prices stayed high, borrowers could usually refinance or sell their homes and still make a profit. People felt wealthier than they actually were.

Sooner or later, the bubble had to pop. And it did. Once interest rates stopped falling, people couldn’t get better debt deals. With fewer buyers in the marketplace, sellers lowered their prices. Some people had borrowed more on their home than it was now worth. Many were forced to try to sell their now-overpriced homes. The resulting glut in the real estate market further pushed down home prices.

Meanwhile, it became easier to get and use credit cards. Use of debt—buying now and paying later—“became more and more acceptable,” says Steve Fazzari, an economics professor at Washington University in St. Louis, Missouri. But if credit cards are not paid off fully each month, they accrue interest on the unpaid balance. This can add up to huge amounts in personal debt over time.

Bad business decisions by many lenders made matters worse. Starting in the 1970s, the government cut back banking regulations. The move freed banks to take more risks in loans and investments. Investment firms, insurance companies, and other businesses faced even less regulation, but they started acting like banks, too. Some programs they offered sounded like 30-year investments that paid good interest rates. The invested funds weren’t technically bank deposits, but they worked that way, except that they weren’t insured.

Another type of deal bought up lots of home mortgages and resold the repayment income to groups of investors. Interest earnings varied, based on whether investors got paid back from earlier or later mortgage payoffs. But these investments were risky: Too many people began to default on their mortgages. Consumers—borrowers—also were irresponsible. Some signed contracts they did not understand or even read. They ignored the fine print that might have warned them that certain deals were too good to be true.

Additionally, banks didn’t operate in just one state anymore. They did business nationwide and traded in international markets. A single large bank’s failure could potentially cause chaos in the system. “Everybody had started borrowing too much money, not just in the United States,” says Aggarwal. The resulting crisis became “global in nature.”

A Crisis of Confidence

In 2007, an economic recession, or a downturn in the economy, began. Lower revenues led to cuts in production and services. Job losses followed. As people had less income, they spent less. Confidence in the economy declined. Businesses and everyday people had trouble paying debts, so financial institutions had less money coming in. Foreclosures became more common. Yet as more property came on the market when people couldn’t pay mortgages or other debts, the value of those assets fell. Eventually, big firms couldn’t pay their own debts, and they began to fail.

When the investment firm Bear, Stearns & Co. had problems in early 2008, the federal government helped arrange for another company to buy it. Then Lehman Brothers filed for bankruptcy in September 2008. Other collapses followed, including the huge AIG insurance company and Citicorp, which survived only because of huge government loans. “When the banks started to fail, they didn’t want to lend to each other,” says Aggarwal. “They didn’t know who was going to go down next.” The lack of confidence made it hard for anyone to get loans. Companies couldn’t get ready cash, so there were more job layoffs and production cuts. “The financial crisis quickly became an economic crisis,” says Aggarwal. In other words, problems with getting loans and having enough cash on hand caused lower economic production, which meant less work and less income for millions of people. Like a vicious circle, the banks’ problems lowered confidence throughout the financial system.

Stock values plunged, too. Nervous investors’ expectations aggravated problems. If many shareholders sell because they fear falling prices, stock prices fall faster. Stocks fell by more than 50 percent, and people lost lots of value in retirement funds and other investments.

It’s now clear that some financial firms had become “too big to let fail.” “Since a lot of other financial institutions are holding their assets, it’s like a stack of dominoes,” explains Lewis Mandell, a finance and business professor at the University of Washington. “If they fail, they have the ability to bring down the rest of the economy.”

The federal government tried to restore confidence in the financial system by buying large shares in some troubled firms. It also guaranteed some firms’ debts. In other words, the government promised to pay the companies’ debts if the companies couldn’t.

“The cost of bailing out banks and other institutions and corporations that were too big to fail is in the trillions of dollars,” notes Mandell. “That is going to be added to the money that Americans owe” as part of the national debt.

Other government actions tried to prop up the economy with stimulus fund grants. Basically, the government gave money to states for public projects. In theory, putting underused resources back to work could create jobs or at least prevent wider layoffs. But this strategy also adds to the national debt.

Stimulus money is helping states with much-needed repairs and the rebuilding of roads, bridges, sewers, and other projects. It also lessened the bite of big budget cuts required by lower tax revenues in the states. Otherwise, says Fazzari, “they were going to be forced to cut back on basic public services.” Critics on both sides debate the wisdom of government actions. But, says Fazzari, “they don’t know what would have happened without the stimulus.”

However, unless you hold a degree in finance (and perhaps even if you do), the troubles in Greece can be hard to explain to yourself, never mind to a child.

Many experts have called for stricter regulation of the financial sector. They want rules to promote prudent lending and investment actions in the future, especially among large firms. Consumer debt and investment programs will probably change, too. Instead of complicated borrowing programs and elaborate investment deals, financial companies may offer something simple that non-experts can understand.

“Taxes are likely to go up and stay high for a very long time,” to help pay off the cost of the stimulus, says Mandell. He urges teens to be cautious in their financial affairs. Ask yourself if you really need the latest cell phone. Consider choosing an affordable college. And someday, when it is your turn to buy a home, choose or build one that you can comfortably afford. “Live within your means, and borrow only the money that you can pay back,” agrees Aggarwal. “Overborrowing could lead to disaster on a personal basis—and on a national basis.