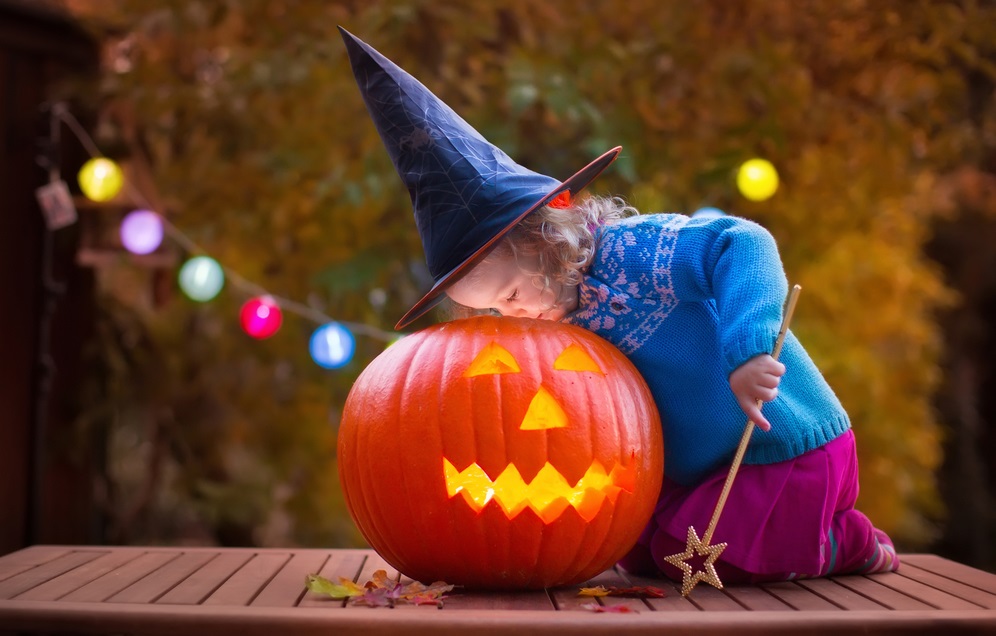 In just a few days, kids around the country will wake up excited for a night of trick-or-treating and costume parties. You can already spot decorations featuring green-faced witches, bats, black cats, ghosts, jack-o-lanterns, and monsters up and down the neighborhood streets. But how much do you really know about the stories behind our favorite Halloween myths and superstitions?

A mixing cauldron of holiday traditions

Then there’s the Christian holiday of “All Hallow’s Day” or “All Saint’s Day” on November 1 (with ‘Halloween’ being ‘All Hallow’s Eve’), on which people went door to door asking for food in exchange for prayers. And there’s the traditional Mexican holiday, Día de los Muertos. Many of these traditions built upon each other, and all of them have contributed to the way we celebrate today! Here are some of the surprising ways that our favorite Halloween myths and traditions came into being!

Why do we carve jack-o-lanterns out of pumpkins?

You might think we’re joking, but the answer is, “Because turnips aren’t as easy to find in America.” Although carving pumpkins seems like an ancient tradition, it actually dates back to Irish immigrants in America. In the Irish folktale “Stingy Jack,” a wicked man named Jack met the devil and managed to trick and outsmart him until he finally made him promise never to take his soul. When Jack eventually died, he wasn’t allowed into heaven for his crimes… but the devil wouldn’t take him, either! Instead, his spirit wandered the earth carrying an ember from the devil’s fire inside a hollowed out turnip to light his way.

Irish people enjoyed hollowing out turnips, rutabagas, and other root vegetables to create lanterns to keep away nasty spirits like Stingy Jack—also known as ‘Jack o’ the Lantern.’ When Irish immigrants arrived in America in the 1800’s, they began using the bigger, rounder, and easier to carve pumpkins as jack-o-lanterns. The trend caught on and became a beloved Halloween tradition! If you’re curious about what traditional carved turnips look like, here are a few frightening examples. We like pumpkins better!

Why are ravens seen as an omen of death?

This myth partly began in medieval England. Back in those days, there were no handy methods to dispose of old and rotting meat—and meat rotted quickly before the invention of refrigerators. As scavengers and less than picky eaters, ravens became valuable as garbage removal services. In fact, it was actually illegal to kill them. But because they fed on dead things, and because swarms of ravens increased during times of plague and disease (more death means more food for the ravens), many people began to think that ravens brought about death rather than the other way around. You can read more about this belief in this month’s bird-themed issue of MUSE Magazine.

Lots of cultures see ravens as holding a special supernatural power. In England, ravens are ceremoniously kept at the Tower of London (by an official whose real job title is “Ravenmaster”) due to a legend that England would fall if they ever left the Tower. In Ancient Greece, ravens were often seen as a messenger of the God Apollo, while some European cultures saw them as the ghosts of lost souls who weren’t buried properly. You’ll find ravens portrayed as tricksters in Native American folklore, but also as the creator of the world.

The truth is that ravens are extremely intelligent birds and capable of sophisticated problem-solving. Some can even speak a few words. Their uncanny intelligence, dark appearance, and appetite for dead flesh gives them a famously spooky reputation. Edgar Allen Poe’s poem “The Raven,” in which a raven famously croaks “Nevermore,” has definitely helped keep this myth alive!

From razor blades in candy apples to poisoned popcorn balls, everyone knows that Halloween treats can be dangerous in the wrong hands. But is it really common to tamper with Halloween candy? It turns out that this myth can be traced to one dangerous dad: Ronald Clark O’Bryan, who poisoned his own children’s Pixy Stix and blamed it on an unknown neighbor. Unfortunately, O’Bryan’s son died.

Ever since this incident, parents have been careful to check their children’s candy for any mysterious openings or holes in the wrappers. It’s rare to see homemade treats at Halloween anymore, as sealed candy with standardized ingredients are much safer. We’re not complaining about parents checking candy—that’s the safe and healthy thing to do—but we also don’t want anyone to be needlessly terrified about poisoned candy! The worst thing that’s likely to happen after eating Halloween candy is a tummy ache from too many sweets!

Why do ghosts say ‘boo?’

Even the smallest children can tell you what a ghost says: “BOO!” But where did this story start? While the Irish can take credit for jack-o-lanterns, you can thank the Scottish for this ghostly catchphrase. “Boo” (or, originally, “Bo”) was a popular way to scare someone or get someone’s attention. In a 1738 book called Presbyterian Eloquence Display’d, Gilbert Crokatt wrote that “Boo is a Word that’s used in the North of Scotland to frighten crying children.” We’re not sure if the children started crying before or after someone yelled “BOO!” at them!  One strange Scottish expression, “He can’t say bo to a goose,” refers to a shy or quiet person.

So where did the association with ghosts come from? Well, if ‘boo!’ is what you yell to scare or startle someone, it makes sense that ghosts, who are known to pop out of nowhere and scare people, would say ‘boo,’ too! Scottish poetry from the 1800’s sometimes refers to ghosts, goblins, and monsters as ‘boo-men.’ Does that sound familiar? Perhaps a bit like ‘bogeyman?’ Yep, that’s the source of that word, too!

Why do people think black cats are bad luck?

Blame this superstition on English people again: they associated black cats with witches. According to legend, in the mid 16th century, a black cat crossed the path of a father and son traveling along the road. They threw rocks at the cat to scare it away (making them the bad guys of this story, in our opinion) until the injured kitty ran off into the home of a local woman. A woman who, coincidentally, was rumored to be a witch. The next day, the father and son saw that same woman walking with a limp. Clearly, the witch was able to transform herself into a cat! Ever since then, black cats—especially black cats crossing one’s path—became associated with witchcraft. The infamously superstitious Salem, Massachusetts colony even banned black cats.

That said, not everyone thinks black cats are bad luck. In many cultures, black cats are actually symbols of good luck! In Germany, a black cat only brings bad luck if he crosses your path from right to left. Otherwise, he’s a symbol of good luck. People in Japan and Scotland consider black cats lucky—as did sailors in the 18th century. One spooky fact about black cats: people with cat allergies display more allergic symptoms from being exposed to black cats than lighter-colored ones. Could it be that some Puritans who believed a witch had cursed them with sickness simply suffered from cat allergies?

Why are witches green?

Picture a scary Halloween witch in your head. Odds are, she has a pointy hat, a broomstick, and a green face? Why is that? According to the most recent issue of MUSE Magazine, you can thank the most famous green-faced witch for that: The Wicked Witch of the West! Author L. Frank Baum never mentions the Wicked Witch’s skin color in his books, but the movie adaptation made the most of its cutting-edge color technology. Dorothy’s slippers, silver in the books, became ruby red onscreen, while a horse in Emerald City changed color every few seconds. What better way to emphasize the witch’s frightening appearance than to make her skin an unnatural color? Her green skin tone especially emphasizes the way she’s ‘green with envy’ over the ruby slippers.

People come with all kinds of skin tones, but there’s no such thing as a green person in real life. Therefore, someone with green skin might seem unworldly, unnatural… magical. Green has always been associated with nature, as have witches. Less charitably, rotting or decomposing bodies start to take on a sickly greenish tinge. (Think of Frankenstein’s creature, who is usually shown with green skin). These sickly, frightening associations with green skin help explain why the Wicked Witch of the West has frightened generations of film-goers!