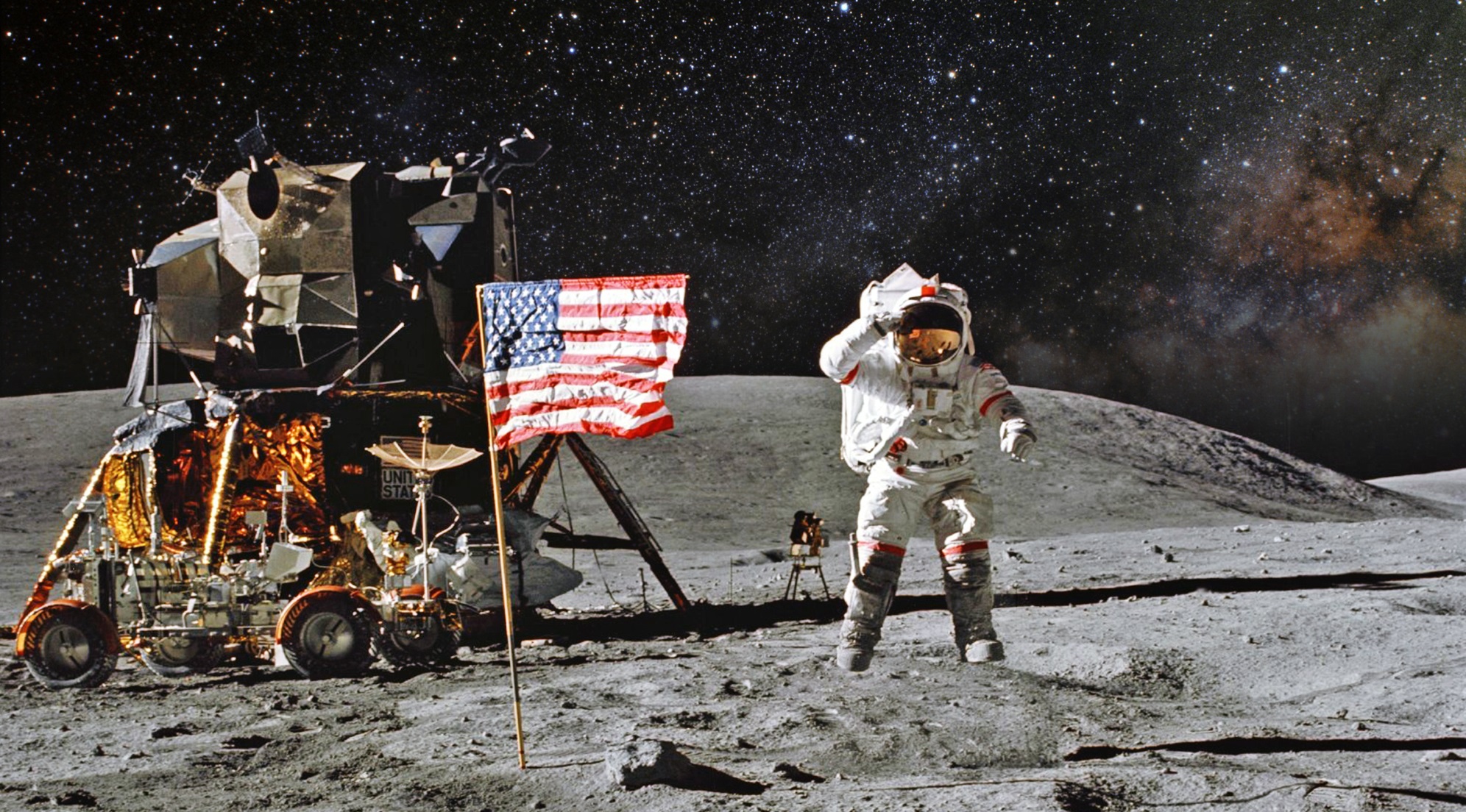 5 Ways to Celebrate the 50th Anniversary of the Moon Landing!

“That’s one small step for a man, one giant leap for mankind!” Americans thrilled at the crackly sound of Neil Armstrong’s voice over their TV sets as he became the first person to walk on the moon. Fifty years later, that historic moment still symbolizes how science and technology can bring people together– or further away than anyone thought possible!

In celebration of this historic anniversary on July 20, we’re sharing some resources and activities for kids of all ages!

Listen to the History

There’s no better way to learn history than from someone who’s been there! The July/August issue of COBBLESTONE Magazine is packed with all of the facts that kids need to know about this milestone event. But that’s only half of the experience. Get in touch with someone– a grandparent, a neighbor, or a family friend– who remembers the moon landing and have a conversation together about what it was like to watch it happening!

To go even more in depth, download this article, “The Eagle Has Landed,” from COBBLESTONE and read it together. The article goes step by step through everything that a student needs to know about the moon landing, but maybe Great-Aunt Marie will have more details to add. Maybe she remembers making a bet that Apollo 11 wouldn’t make it to the moon, or she recalls missing Neil Armstrong’s famous words because her baby brother started crying. These little details make history real for kids.

We said there’s no better way to learn history than from someone who’s been there, but what about someone who’s been to the moon? Younger kids ages 3-6 will love this article from CLICK Magazine written by Buzz Aldrin, who grown-ups know as the second man to land on the moon! He tells the story of his life and the moon landing so vividly that you’ll feel like you were there with him!

Younger kids can also enjoy this video story time from our YouTube channel:

Don’t forget to share part of the video of Neil Armstrong’s first steps on the moon! (Kids will inevitably be amazed by how fuzzy the video quality was.)

It’s no surprise that the moon landing has inspired plenty of movies. With the 50th anniversary taking place on a Saturday, it’s the perfect time for a family movie night! Pop some popcorn, settle down together on the sofa, and get ready for a Hollywood blockbuster. It’s also a great opportunity to discuss how movies, even movies based on history, sometimes play around a little with the facts. Which parts are true and which are exaggerated?

First Man, which came out in 2018, follows Neil Armstrong in the events leading up to, during, and after the moon landing. Kids may be surprised to learn just how risky the moon landing really was. Armstrong’s odds of survival on the journey were not high. This movie is the closest you can get to walking in the shoes of the man who took one giant leap for mankind.

The Oscar-nominated 2016 movie, Hidden Figures, also follows an important player in the moon landing, but of a very different kind. Katherine Johnson, a mathematician who calculated the trajectories for both Apollo 11 and Project Mercury, received little attention in the history books for many years. That’s partly because she was an African-American woman, part of a team of ‘human computers’ whose work was invaluable to the astronauts. Tweens and teens who want to know the true story behind Hidden Figures can read “The Path to the Moon,” a story about Johnson from CRICKET Magazine.

What better way to celebrate the moon landing than with a moon-shaped dessert? This delicious recipe for kasmay, a crunchy stuffed Kurdish cookie, comes from FACES Magazine. It’s perfect for munching while watching one of the movies above– or to enjoy after a busy night of crafting!

NASA has some of the best engineers in the world, but you can build your very own lunar module! In fact, before they built the real thing, they made small models using household items. This activity from COBBLESTONE only requires 3 big index cards, tape, 4 paper clips, and 4 coins! Download the instructions here!

Would your kids rather admire the moon from afar? Believe it or not, it’s not hard to build a working copy of Galileo’s telescope. Way back in the early 1600’s, Galileo used his telescope to examine the craters on the moon, discover more moons revolving around Jupiter, and even to prove that the earth revolved around the sun! If you have some old paper towel tubes lying around, now’s the time to put them to use. Get instructions here!

Preview(opens in a new tab)

Toddlers under the age of three might not get as much out of learning about the moon landing, but they can still appreciate the moon! This adorable poem from BABYBUG is just right for a child’s imagination. Ask your little ones what they think the moon looks like. What do they think it would be like to walk on the moon?

Curious kids can find a wide array of information and resources at NASA’s Jet Propulsion Laboratory Website! This site also includes activities that educators can use in a classroom or summer camp setting! Museums near you may also host special events to honor the occasion. Here’s a list of places you can visit with your family!

It’s important to remember this momentous day in history, but it’s just as crucial to look forward to the future. What kinds of incredible advances will be made in space travel during our lifetimes? Will a MUSE reader be the first person to land on Mars? We can’t wait to find out!