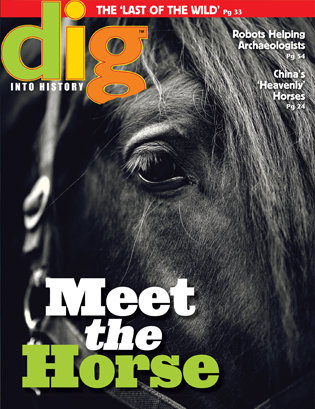 A Lot More Than Just Horsing Around…

Do you have a horse crazy kid in your life? Loving horses is a special kind of affliction that seems to target both girls and boys of a certain age. I know this from experience. Back in the day, I was one of those preteens who fell in love with horses. I took riding lessons and was lucky enough to go to riding sleep away camp. The walls of my bedroom were plastered with horse posters, my shelves were crammed with horse statues. To this day I sometimes stop my car and get out to watch the horses I see in the fields near my house.

If you have one of these kids in your life, you will want to get them a copy of the latest issue of Dig. If you haven’t had the pleasure of digging into Dig (sorry, I couldn’t resist the pun), each issue is theme-related and this month’s theme is horses. In fact, from the very first page (“5 Hairy Horse Facts” anyone?) I was instantly immersed in the history and culture surrounding my first animal love.

In particular, I loved the article on the people of Mongolia, who respect the horse as their companion. Their belief is, “We are nothing without our horses.” How I would have agreed with that as a horse-loving preteen! And I loved seeing “Great Leaping Lipizzans!” complete with the picture you see above. The beauty of these particular horses is just astounding and their grace is unparalleled. I hope you’ll share the article below with the kids in your life. You might end up with a horse crazy kid of your own. They were the horses of European royalty. But they were saved from disaster by the United States Army—with the help of allies and even former enemies.

The Lipizzan horse breed dates back to the 16th century, when the ruling family of Spain and Austria, the Hapsburgs, established horse farms to supply riding schools and military forces. One such farm was in Lipizza, then in Italy (now Lipica in Slovenia). From here came the famed Lipizzans, descended from Arab, Italian, and Spanish horses. In Vienna, the capital of Austria, the Spanish Riding School was founded to train these horses and their riders. It is now the oldest riding academy in the world, observing its 450th year in 2015. The strong, graceful Lipizzans are taught here to leap up with all four legs lifted simultaneously, a difficult maneuver known as “airs above the ground” (see above). Lipizzans are often described as white, but they are actually a light gray, their coats changing from dark to light by the time they are 6 to 10 years old.

Near the end of World War II, American army officers in Czechoslovakia learned from a captured German general that prisoners of war were being held in a nearby village, along with hundreds of horses taken by the German army, including 250 Lipizzans. Prisoners and horses were in danger from the advancing Soviet army. With the help of German officers, a rescue was planned. The order to go ahead came from American general—and expert horse rider—George S. Patton: “Get them. Make it fast!”

U.S. forces secured the village and a road leading to a safe location 130 miles away in Germany, which had just surrendered. Transported in trucks and in small herds, the horses were escorted by the American army and some of the freed prisoners to safety. They were then brought home in captured German trucks.

Today, there are about 8,500 Lipizzan horses worldwide, including about 1,150 in North America.