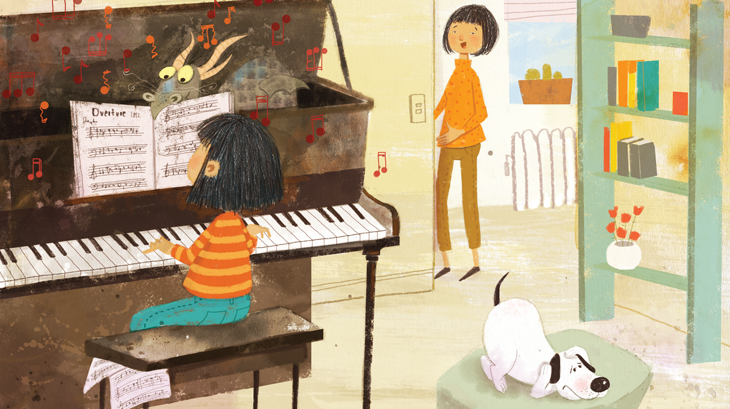 When Your Aspiring Musician Won’t Practice

It starts with wild enthusiasm – on the part of you and hopefully your child. How fun it will be to learn to play violin or tuba or piano, goes the thinking. This will be a magical, musical journey! You procure an instrument, you line up a lesson. And then it’s time to practice every day. The initial euphoria disappears faster than it takes say (or play) allegro. You begin nagging, which is not particularly pleasant to the ear. And somehow your child becomes a willful, unrecognizable shadow of the budding, beaming musician who headed into that first lesson.

As the parent of one former cello player and a younger, current violin student, I have been there, done that and tried just about everything. Eventually, I concluded my girls had to tap into their own motivation and learn their own methods of self-discipline. I couldn’t make them want to practice or always practice. But I could help teach them that acing something doesn’t come easy, that hard work pays off and that making the time for it makes a difference. There is great pleasure in the process of learning and hard-earned mastery. As they grew, they decided how they were going to apply that knowledge to making a practice plan for themselves that worked.

Professional violinist and mom Ellen Pendleton Troyer recommends making the time to sit with and encourage each practice session. PBS Parents recommends setting small goals of mastery. Instead of insisting on 30 minutes of playing, for example, suggest practicing a part of a piece till a child can play it without error. We’d love to hear your tips.

And then there’s always bringing a dragon into the equation. In the wonderful story “Mae and the Dragon” from Spider Magazine, a young girl reluctant to practice piano discovers the only cure for a sick dragon is playing pieces for him, and the longer she plays, the better he feels – and transforms his form depending on the piece. It’s a fun and original tale that reminds us of one of the greatest reasons to practice – so you can perform in a way that brings pleasure to those who love music.

Eventually, I concluded my girls had to tap into their own motivation and learn their own methods of self-discipline. I couldn’t make them want to practice or always practice. But I could help teach them that acing something doesn’t come easy, that hard work pays off and that making the time for it makes a difference.

Mae and the Dragon But Mae did like going to her piano teacher’s house.

Mae made sure that she was early for her piano lesson every single week. She would dash into the backyard while other students tinkled away at the piano inside, and jump on the trampoline until her legs turned rubbery.

One fall afternoon, as Mae jumped on the trampoline, something just below the roof’s edge caught her eye. Clinging to the stucco wall just beside an open window was a dragon.

He was a little larger than a housecat, with glimmering blue skin and tiny diamond-shaped scales, and curling red whiskers that dwindled to gold tips.

Through the window, Mae could hear the plinking, twiddling sounds of another student playing “Für Elise.” She made her voice softer than the music.

“Hello,” the dragon whispered back.

The dragon sighed happily as the music changed to a faster, rolling tune. “I like this one,” he said. His pale blue body began to change color, darkening to a shimmery aquamarine, and his whiskers flushed green and yellow.

“What are you doing on my piano teacher’s wall?” Mae whispered.

“I used to live beneath the stage in a big hall where an orchestra played. Every night, there was music of all different flavors.” The dragon shut his eyes dreamily. “Delicious.”

“Like a buffet,” said Mae, who had once been to a buffet with so many choices that she couldn’t finish two of her five desserts.

“But then the orchestra hall was torn down,” the dragon went on. “I didn’t know where to go. I got very hungry. I’m not meant for the quiet or the cold.” The dragon gave a little shiver, remembering. “Then, one night, at the end of a quiet street, I heard someone playing Mozart’s Piano Sonata in A Major…” His voice grew misty again. “And that’s how I found my way here.”

Inside the house, the music stopped. “Mae!” called Mrs. Young. “Come in, please!”

This time, as she played her scales for Mrs. Young, Mae set down each finger slowly and carefully. She imagined the notes floating away from the piano and through the window, like wafting scents of roasted chicken and fresh chocolate cake. One week later, Mae raced across Mrs. Young’s backyard without stopping to bounce on the trampoline. The dragon was still clinging to the wall above the window. His whiskers still twitched with streams of color, but the hues were fainter and slower now, like the water flowing from a paintbrush that is nearly rinsed clean.

Another student was playing a Bach motet. The dragon’s belly flushed with sweet, soft pink, but the rest of his body was gray.

“Hi,” Mae whispered, crouching behind the wisteria vines. “You look different. Are you all right?”

“It’s getting cold out here,” the dragon whispered back. “Especially at night.”

Mae glanced around Mrs. Young’s backyard. The leaves on the trees were turning yellow, and the flowers were gone, their stems floppy and brown. “The piano lady keeps the window closed more and more,” the dragon added. “Then I only get crumbs.”

“We have to find someplace indoors where you can stay,” said Mae.

“Mae!” shouted Mrs. Young, making both of them jump. “It’s time for your lesson!”

Waving goodbye to the dragon, Mae hurried inside. She tried to play well, but now she was too worried to get all the notes right.

All week long, Mae thought and thought about the dragon, and woke up every morning to think about him some more.

By her next lesson, she had a plan. Mae ran through Mrs. Young’s backyard, right past the trampoline. She ducked behind the rattling wisteria vines and stared up at the stucco wall. At first, she was sure the dragon had disappeared. But then one of his black eyes blinked.

Mae stared up at the dragon. His scales were a faint, chalky gray, almost the color of cement. His whiskers were like dead grass. The piano student inside the house played a scale, and Mae watched a vein of faint blue slide slowly through the dragon’s skin, like water poured into a dusty glass.

“You can’t stay here anymore,” Mae whispered. The dragon didn’t move. “You should come home with me. I’ll take care of you. I’ll do my best.” Mae reached up and ran one finger over the dragon’s chilly skin. “I promise.”

Carefully, as though he might crumble if he moved too fast, the dragon inched down the wall toward Mae’s arms. His body was heavy, and surprisingly warm in the middle, but his tail and toes were freezing cold.

Mae unzipped her backpack, where she had put her fuzziest, warmest blanket, and settled the dragon inside. Then she tiptoed into Mrs. Young’s living room and waited for her lesson to begin.

Afterward, back at her own house, Mae hurried to her bedroom and closed the door. She lifted the dragon gently out of her backpack. His skin was still pale gray, but his toes weren’t quite so icy.

“Are you hungry?” Mae whispered.

The dragon’s voice was hoarse and small. “A snack would be nice.”

“I have an idea.” Mae took her iPod and headphones down from her bookshelf. “With recordings, the notes are never wrong, and you can eat anytime you want!”

The dragon blinked at the iPod. “That’s music?”

“I’ll show you.” Mae placed the headphones over the dragon’s ears—or over the spot where his ears seemed to be. “Ready?” She turned on the 1812 Overture.

The dragon’s eyes widened. His nose snuffled softly. “I can smell it,” he said, “but I can’t taste it.”

“Hmm.” Mae tugged the headphones away. “So the music needs to be fresh. I guess we’ll move on to plan B.”

With the dragon tucked under one arm, Mae tiptoed back down the hall to the living room. She raised the lid of the old upright piano. Inside, rows and rows of wires twined down into the dimness, where fuzzy hammers waited to tap them.

“Can you climb inside?” Mae asked.

The dragon slipped over the top of the piano. He padded down into the big wooden box like a person climbing into a warm bath. Mae waited until he had settled inside. “How about some Haydn?” Mae whispered into the piano.

“Please,” the dragon whispered back.

Mae opened her piano book and began to play a minuet. It was in the easy, cheerful key of C, but with tricky sets of triplets scattered through the melody. Mae kept her eyes on the music, making her fingers move slowly, thoughtfully, imagining each note feeding the little dragon.

Her mother’s head popped through the kitchen door. “Mae,” she said, surprised. “You’re practicing? Right after your lesson?”

Mae nodded, not stopping. She made it to the last chord without too many wrong notes. Then, making sure her mother wasn’t watching, she peeped under the piano lid.

The dragon had turned a soft pink color. “Thank you,” he whispered. “That was very tasty.”

Mae remembered to feed the dragon every single day. At first, she played the easy classical pieces in her piano books, and the dragon blushed with pale pastels. Then she moved on to her favorite songs from the movies, and then to jazz and ragtime and Broadway.

On lesson days, Mae carried the dragon inside her backpack to Mrs. Young’s house, so he could listen to the other students. When the weather grew warmer, she took him to the park, where guitarists and drummers and string ensembles performed in the big stone band shell while Mae and the dragon sprawled on the grass, soaking in the music and the sun.

Eventually, Mrs. Young gave Mae a book of Beethoven sonatas. Mae practiced and practiced, removing the sour notes, making the music ripple and soar, until one day she played an entire piece without a mistake.

Inside the piano, the dragon gave a sigh. “Delicious,” he murmured. Then, from the depths of the piano, Mae heard a low, satisfied burp.