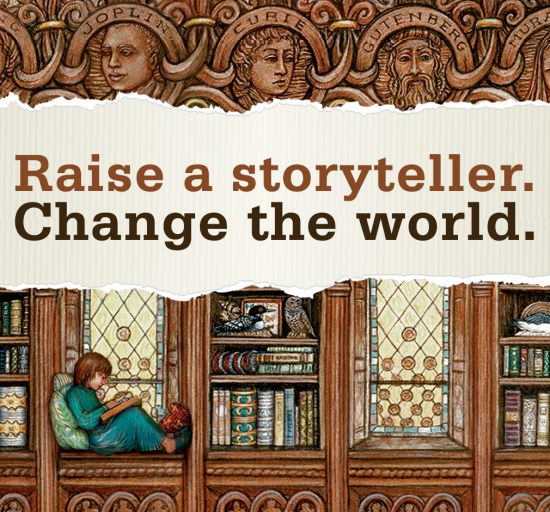 Meet the Magazine: How Cricket Got Started

Who better to start off our new “Meet the Magazine” series than the founder of Cricket Magazine, Marianne Carus. Here is an excerpt of Marianne’s essay about the founding of Cricket that originally appeared in “Celebrate Cricket: 30 Years of Stories and Art”.

I’d like to think back a bit and tell you how it all began. What sparked the idea to start a new children’s magazine when there were already eight-five or ninety such magazines saturating the market? Many people shook their head and felt sorry for us, such hopelessly naive lunatics, who wanted to publish yet another magazine.

But the idea was really not as crazy as it may have seemed. In the sixties I had edited the Basic Readers for the fourth, fifth, and sixth grades of the Open Court Correlated Language Art program, which introduced thousands of children to worthwhile literature. Teachers begged my husband Blouke (publisher of the Open Court Publishing Company) and me for more high-quality, literary reading materials, not books, but shorter selections. In order to find good stories for these young readers, I looked at all the existing children’s magazines, hoping to find just what I wanted. But I searched in vain. The stories were dull, mostly staff written, the illustration mediocre. There was not one literary children’s magazine among all those being published in the 1970s. Not one of all these children’s magazines offered original contributions by contemporary authors! 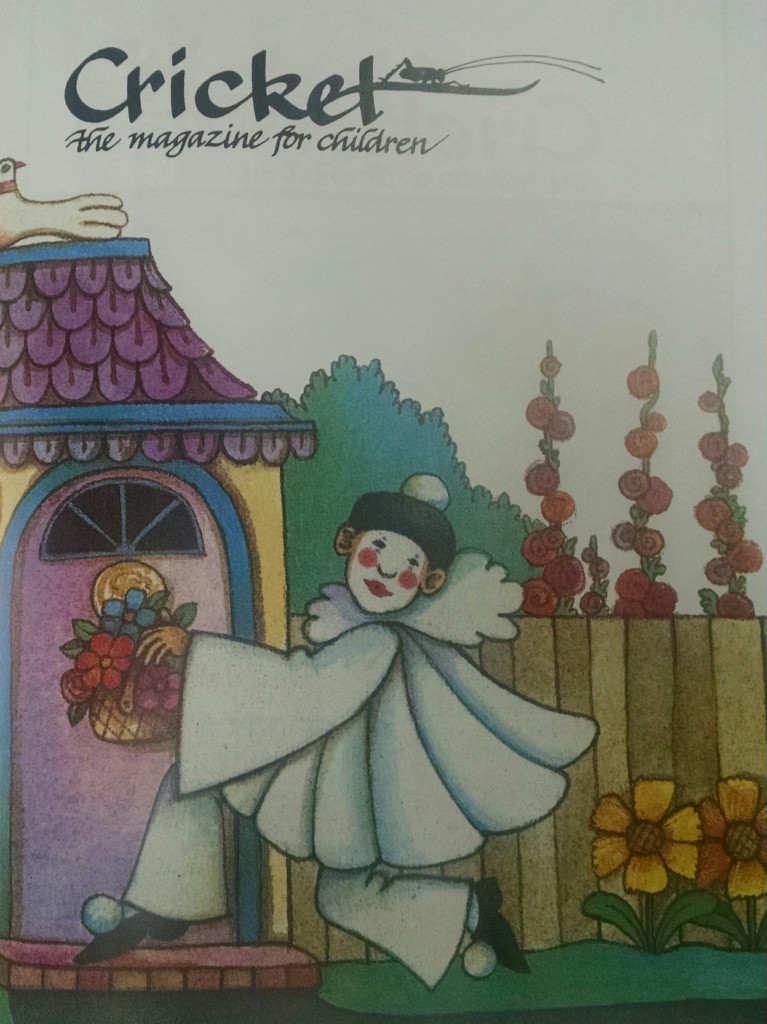 Cover of the May 1983 issue of Cricket, “The May Basket” by Tomie dePaola, pencil and waterproof ink.

I came across many stories taken from a children’s magazine called St. Nicholas, that was started in 1873. In St. Nicholas I finally found good literature—great stories and poems, well-written nonfiction articles about all kinds of subjects—and there were great illustrations.  I began looking through many bound volumes of St. Nicholas, and it was St. Nicholas that inspired my first thoughts and plans to create a new magazine, a magazine for children that would aspire to the same high literary standards. 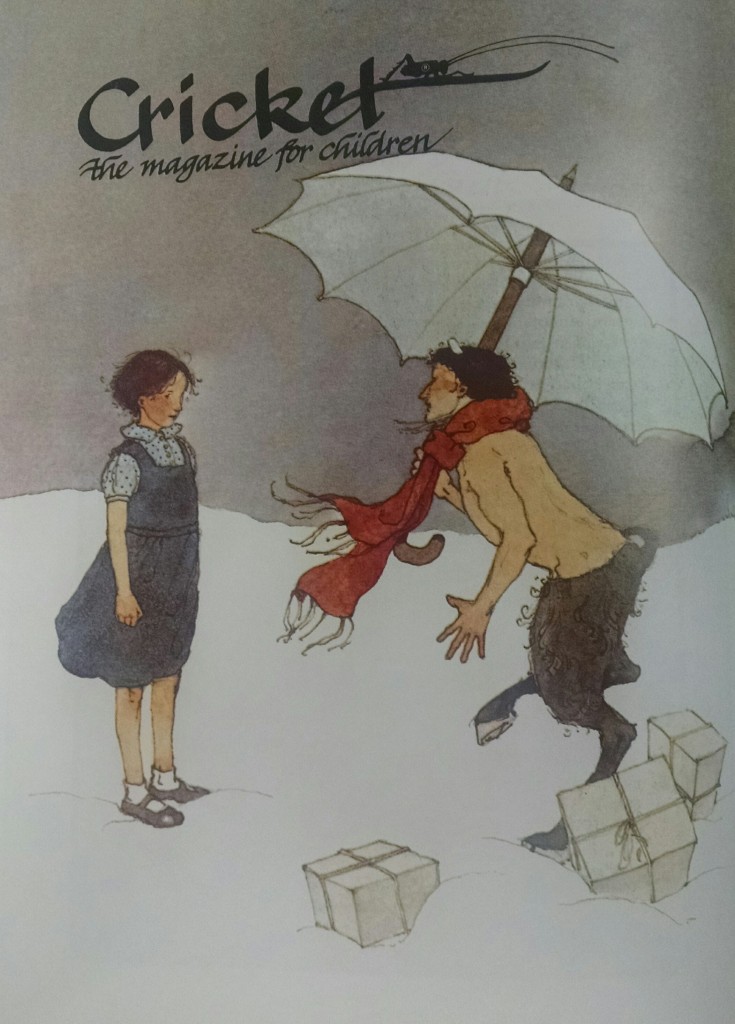 Cover of the June 1982 issue of Cricket, “Lucy Meets the Faun” by Lisbeth Zwerger, watercolor.

Our magazine would include only stories, articles, poetry, and illustrations of the highest quality. The layout and design had to be excellent. We wanted to develop in our readers not only a feeling for good content and style, but also a rudimentary aesthetic sense or taste for fine graphics. Exposed to good writing and good illustrations we believed that children would eventually develop a taste and appreciation for good literature and art. We still find it extremely important to present the young child with literary and artistic experiences that have integrity, beauty, and humor, because we believe that good taste can be developed and nurtured.

More important even than development of artistic tastes, however, were the educational ideas, the philosophy, if you want to call it that, behind the publication of this new magazine. We wanted it to be lighthearted, delightful, funny, amusing, nondidactic, but at the same time we were determined to introduce the basic values of our own and important other cultures throughout the world with the great stories in our new magazine. 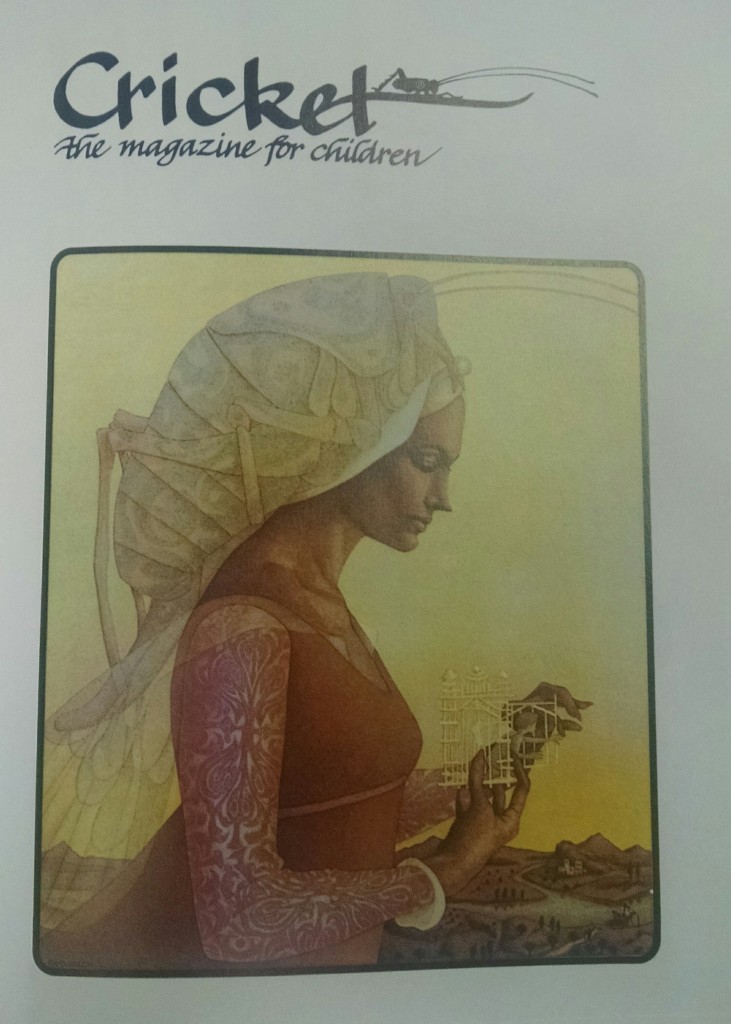 Cover of the June 1979 issue of Cricket, “Cricket Woman” by Leo and Diane Dillon, watercolor and pastel.

We wanted our readers to find out about great events in history and we wanted to publish well-written stories about these events, stories that would be so alive and so exciting that young readers could not put them down. In our new magazine we planned to introduce the great and famous people who shaped history—not just statesman, kings, and queens, but also great writers and poets, scientists, explorers, composers, artists, and naturalists. We wanted to give our readers a feeling for other countries by offering them stories translated from other languages, stories that would awaken their respect for other traditions and customs and stimulate their curiosity, their imagination, and their sense of wonder.