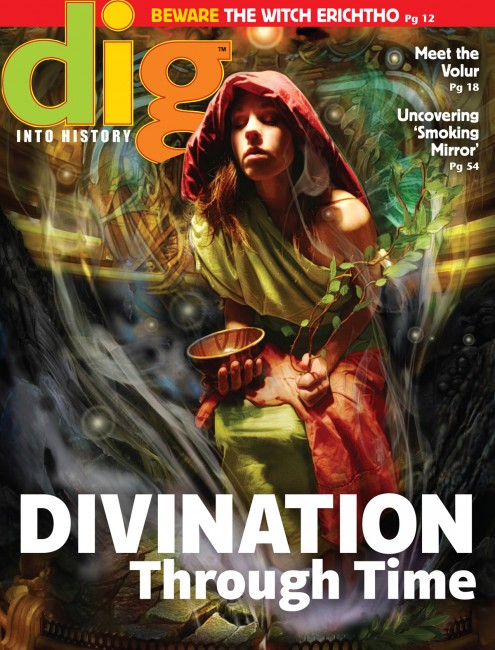 by Rosalie Baker, editor of Dig Into History

Divination! Now here’s a topic that has been on my “to do” list for a long time. The subject certainly is a fascinating one, but presenting it to our readers would be a challenge. We certainly do not want to encourage any readers to follow or believe in the practice. Yet, at the same time, we do want readers to be aware that claims of “divining the future” have no basis in fact and that there is no actual evidence to uphold the claims.

Which Practices To Include?

Once I decided to take on the challenge the question became, which practices to include. There are and have been so many through the centuries that choosing was difficult. The best way seemed to be to focus on a few that would represent not only different time periods but also different areas of the world. A map on page one would help do that—with the countries mentioned in the articles labeled on the map. Ok—I was that far into the issue. Now, it was time to choose. I decided to go back to ancient Egypt to start, then to ancient Greece, then to ancient Rome. There was lots of material, as well as fascinating stories. So many people at the time put so much credence into divinatory practices.

Then, I went forward in time to the Byzantine Empire in the east and then north to the Scandinavian countries. This was fun! I was learning so much. Never had I realized how prevalent these practices were and how influential. I also saw “first-hand” how people who were illiterate or who had little access to books could be easily lulled into thinking divining the future worked. With each bit of new information, more thoughts entered my mind about what should be in the issue. The suffix “mancy” was everywhere—aleuromancy, oneiromancy, scapulamancy. The list seemed endless—and a perfect candidate for Fun with Words.

Now it was time to move closer to the present. Nostradamus—he was a must to include. As was Prester John, whom explorers and kings sought for centuries. How about practices that continue today? I decided to include three in the Fast Forward department and titled the sections: Meet the Ese, Meet Scrying, and Meet the Tarot.

I had the issue and the authors, but what to do for the Let’s Go Digging section. An email to Adam Smith who had uncovered the Bronze Age site at Gegharot and divination altars brought a reply of “Sure!” I had my first article—and a really good one, as the dig is ongoing and little has been published about it yet. I love to get these scoops! And DIG is so lucky to have so many archaeologists and people in the field willing to write for the magazine.

I still needed more for Let’s Go Digging. There were tons of choices. I finally settled on finds in China, Australia, and the United States. For Artifacts, I just had to go back to my own field—classics. I choose the Piacenza Liver, which has fascinated me since school days and especially after seeing it in the museum in Italy. I can still picture my first glimpse of it. I couldn’t believe that people–many people—had used it to foretell the future!

What an issue – I learned so much. I hope our DIG readers will feel the same way!

Rosalie Baker is the editor of Dig Into History, our magazine for kids ages 9-14 that instills an appreciation for the scientists who explore the ancient world and sparks excitement about world history and human development.