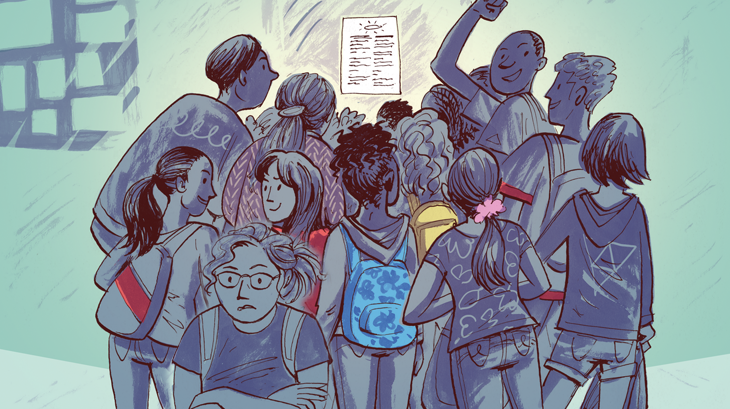 As editor of Cricket, I look to publish a balance of stories in each issue—contemporary fiction and fantasy, history and true adventure, longer and shorter stories—that provide variety and also complement each other. In planning Cricket’s September issue, my thoughts naturally turned to school stories.

This month, Cricket begins a two-part story about a fifth-grade girl whose dream of becoming an actress encounters a few bumps in the road when she tries out for the school play. I liked this story for its genuine middle-school voice, as well as for its moments of ironic humor. Not all is smooth sailing for Gillian, the main character, but she has a supportive family, including an older sister with an interest in astronomy, who comforts the aspiring actress with the idea that she is like a distant star whose light is not yet visible in the night sky but one day will shine.

With this story setting the stage, so to speak, I also included in the issue an activity about learning stage directions and a nonfiction historical article about a theater troupe in colonial America.

I hope you enjoy this excerpt of part 1 of “A New and Distant Star.” Part 2 will appear in the October issue of Cricket. Be sure to subscribe to Cricket to discover how the story turns out. You won’t want to miss the ending.

A New and Distant Star As I left the stage after my audition, I could feel it. The power. The future. I knew that someday when celebrity magazines wrote about me, they would say this moment was when my rise to stardom began.

I approached Mr. Ellison, the drama club advisor, and curtsied low the way I’d been practicing. He cleared his throat. “Right. Thanks, um . . . Gillian. Casting will be posted tomorrow. You may leave now.”

“Thank you, sir,” I said, using the almost British pronunciation of Hollywood stars in the 1940s. “I would love the chance to work with a professional such as yourself.” Before he became an eighth-grade English teacher, Mr. Ellison had been an actor. He played some small roles on TV programs I’d seen— murder suspects and bartenders—and he’d even been an understudy in the Broadway show Cats.

Mr. Ellison didn’t seem to hear me. He was focused on the stage, where a sixth-grade girl was about to begin her audition dance. I appreciated his intensity. He was probably a method director, just like I was a method actor.

I had to wait to look at the cast list the next morning because a bunch of kids were crowded around it. Richie Washington walked away, pumping his fist and whooping, “Yeah, Prince Six!” He slapped hands with Jonathan Troy, who was cast as Prince Ten. I thought their excitement was cute, but kind of pointless. I only remembered eight boys being present at auditions, so Mr. Ellison probably didn’t have much choice.

At last I was close enough to read the cast list. The twelve princesses were first, by number. I scanned from one to twelve, but “Gillian Crenshaw” was not listed. A different girl was playing the old woman, too. I read on to the prince roles, thinking maybe there was a girl part in there somewhere. As I suspected, Mr. Ellison didn’t have enough boys for the twelve princes, so some of them would be played by girls.

But none by me.

No one else in the school had my skills or preparation. I was the only person to have checked out An Actor Prepares from the library in three years, according to the sticker on the back of the book. Of course! If my name was missing, Mr. Ellison must have made a mistake in typing up the list.

I found him in his classroom, writing the date on the board.

I was disappointed that he didn’t ask if I could make rehearsal. “Well, I know you’re super busy and all, being a teacher and a director, but I think it’s possible you made a mistake. You see, my name isn’t on the cast list.”

So it wasn’t a mistake. I had one trick left. It was desperate and a bit embarrassing, but such was the life of an actor. “Maybe you had a lot of people try out, but how many can do this?”

I summoned the saddest memory I had, the day I found my guinea pig dead in the laundry hamper. My eyes filled with water, and a few tears slid down my cheeks.

“Are you crying over this? Seriously?” Mr. Ellison shoved a box of tissues at me. “Listen, do you know how many times I’ve auditioned for something and not been called back? Once I didn’t get cast because I looked exactly like the director’s ex-boyfriend.”

“That’s not my point. Getting turned down happens all the time, for lots of reasons. If you want to be an actor, you get used to it. Unless, well, maybe acting isn’t for you.”

“It is. It’s all I care about!” I was still crying, even though I wasn’t trying to anymore. “By the way, I made myself cry. I’ve been practicing.”

“I see. Look, why don’t you join the backstage crew? You can help build the set, move it on and off the stage. It’s an important job.”

“Every actor should understand the role of the crew. You’ll be more professional because of it. I’ve done it myself. What do you say?”

I was going to be the most professional actor that ever existed. Someday I’d thank Mr. Ellison in my Oscar speech, too, even though he’d be sobbing into his popcorn at home, depressed that he didn’t recognize my talent when he had the chance.

8
PrevDeveloping Good Study Habits
An Archeological Find that will Blow Your Mind!Next