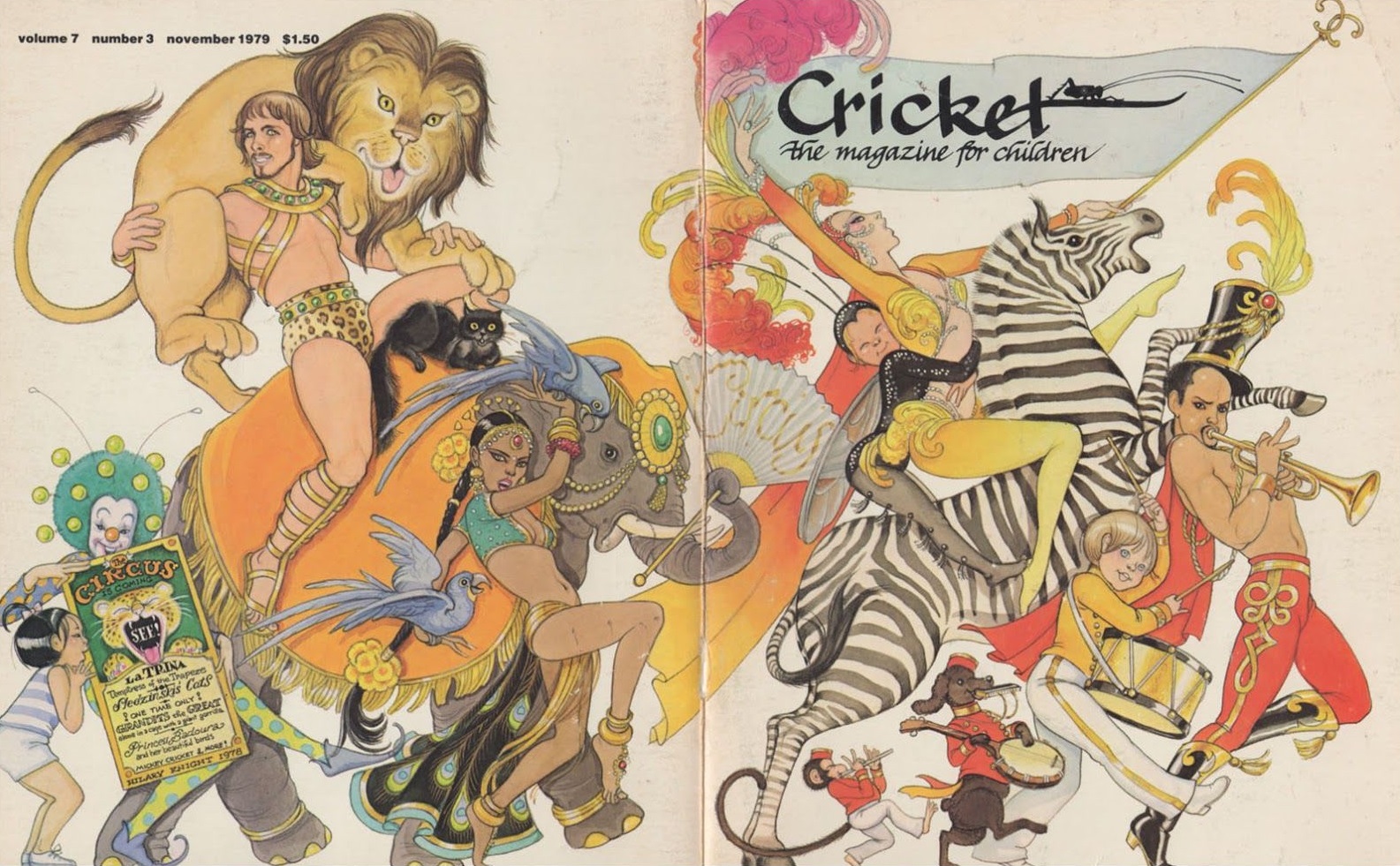 There’s something about great illustrations that stick with you for the rest of your life. Maybe you’ve seen a poster for a movie based on a favorite book and thought, “No, that isn’t right! The main character is supposed to look like THIS!” Or perhaps a cherry pie irresistibly reminded you of the gorgeous slice of pie in The Very Hungry Caterpillar. Pictures make stories come alive in kids’ imaginations. But you may not know that some of your favorite children’s book illustrators also contributed artwork to CRICKET Magazine! We’ve already featured Eric Carle’s work in one of our past blog posts. Now see how many of these beloved artists you recognize!

You may not be able to remember how you know the artist behind this vibrant cover for the November 1979 CRICKET, but we’ll give you a hint. You may be more used to seeing his work in black, white, and pink. Give up? It’s Hilary Knight, the illustrator of Kay Thompson’s wonderful Eloise books. That’s not all– he’s illustrated over 50 books and written 9! A very busy artist, he also helped create costumes and sets for theatre productions and Broadway musical posters.

He first fell in love with the performing arts when his mother took him to the circus as a child. That experience may have also inspired the artwork above! If you look closely at the list of acts that the green-haired clown is holding up, you may notice that it includes “La Trina, Temptress of the Trapeze,” and “Grandits the Great, alone in a cage with a giant gorilla!” Those names reference CRICKET art directors Trina Schart Hyman (expect a blog post on her soon!) and John Grandits.

What does this cover from the April 1976 issue of CRICKET remind you of? Maybe Charlie and the Chocolate Factory, Matilda, or James and the Giant Peach? If you’re thinking of your favorite Roald Dahl books, there’s a good reason. Sir Quentin Blake is the artist who brought Roald Dahl’s quirky characters to life– and he’s the illustrator of over 300 books, 35 of which he wrote. He received a knighthood in 2013 for his services to illustration, proof that colored pencils are at least as mighty as the sword. Blake was also Britain’s first Children’s Literature Laureate and won the international Hans Christian Andersen Award, which honors great achievements in children’s literature. How did he get his start in professional illustration? His Latin teacher’s husband was an artist who encouraged him to submit his work to a magazine called Punch! He was first published at age 16.

This dreamy black and white cover for our February 1982 issue just makes you want to go on a fantastical journey, doesn’t it? It’s no surprise that these flying ships were created by Chris Van Allsburg, whose work you might recognize from The Polar Express or Jumanji! He’s written and illustrated over 20 books, including The Garden of Abdul Gasazi, The Mysteries of Harris Burdick, and the covers of a 1994 edition of The Chronicles of Narnia. The cover for this magazine became part of his wonderful 1983 book, The Wreck of the Zephyr. Van Allsburg also helped out with the development of Disney’s The Little Mermaid and the films based on his books! He’s won two Caldecott medals, was the runner-up for another, and was even nominated for the Hans Christian Andersen award.

Would you believe that he wasn’t always an author and an illustrator? Before getting involved with two-dimensional art, he was a professional sculptor. His wife suggested that his sketches of ideas would make great picture book illustrations. She was right!

If you didn’t grow up with Garth Williams’ illustrations, did you really have a childhood? Williams illustrated countless Little Golden Books with sweet, cuddly illustrations of animals. Some of his most famous works include the illustrations for Charlotte’s Web, Stuart Little, and Laura Ingalls Wilder’s Little House books. To get the right tone for Wilder’s books, he traveled through the areas where Wilder and her family lived, even finding the exact spot along Plum Creek where they once built a dugout home.

Although he’d always dreamed of being an artist, he put his plans on hold when World War II broke out. He tried to get work as a camouflage artist while making posters to advertise the war effort and creating optics lenses in a factory. After the war ended, he illustrated nearly 100 books.

You’d never expect something as innocent and sweet as children’s books about animals could create a controversy, but sadly, segregationists called for Williams’ book, The Rabbits’ Wedding, to be banned because it featured the marriage of a white rabbit to a black rabbit. Williams said that the people protesting his book “will not understand it, because it is only about a soft furry love and has no hidden message of hate.”

It’s hard to imagine making 270 of anything, especially books, but Tomie dePaola’s done it! A writer and illustrator for over 60 years, he’s sold nearly 25 million copies of his books. His books often draw inspiration from his Italian and Irish heritage, especially in stories featuring memorable grandmother figures like Strega Nona, Chicken Feet in Your Soup, and Nana Upstairs and Nana Downstairs.

He’s one of the only illustrators to receive both a Caldecott Honor (Strega Nona) and a Newbury Honor (26 Fairmount Avenue) and represented the USA as a Hans Christian Andersen Award nominee. In 2012, de Paola won the Society of Illustrators Original Art Show Lifetime Achievement Award.

dePaolo loves to use the heart symbol in both his art and his autograph. With such colorful artwork, you’d think his favorite color would be something bright, but he says it’s white. Why? Because it makes other colors look better! He created this cover art for the May 1983 CRICKET after he and Cricket art director Trina Schart Hyman both spoke at the same event in Vermont. They got dinner together before the program and Hyman invited dePaolo to contribute to CRICKET! The rest is history.