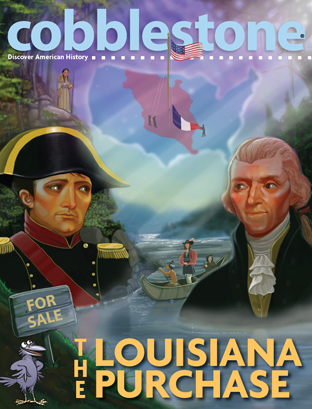 One of the best things about being the editor of Cobblestone is the opportunity for my knowledge of a subject to deepen when I work on an issue. Take the September issue where we focus on the Louisiana Purchase, for example. It is easy to think of the Louisiana Purchase as simply the sale of land from France to the United States. But if you dig deeper and back to the 1600s and 1700s, as we do in the issue, the real story is much more complex and interesting with far-reaching consequences.

During the time of the first European exploration, France claimed an enormous amount of North American territory—more land than Great Britain. French adventurers were curious about the interior of the continent, and they explored the waterways that led from Canada to the Mississippi River to the Gulf of Mexico. They claimed all the land that was along those waterways. But slowly, over the decades, France’s ability to hold onto that vast expanse of land weakened. What I discovered as I crafted this issue is that understanding France’s evolving role in North America is key to understanding the circumstances under which the United States became the owners of Louisiana.

If the young history buff in your life wants to delve deeper into the details of the Louisiana Purchase, this issue will clue them into how a serious rivalry with Great Britain, secret negotiations with Spain, and a rebellion in the French colony of Haiti each played a role in creating the United States we know. I am also including some fun facts about the Louisiana Purchase below. I hope these will whet your family’s appetite and get you excited about the September issue.

For even more fascinating insights into American History be sure to subscribe to Cobblestone. Napoleon Bonaparte rose to power during the French Revolution (1789–1799). After proclaiming himself emperor in 1804, he led a series of successful military campaigns that allowed France to dominate European affairs until 1815. Napoleon’s determination to reassert France’s presence in North America in the early 1800s resulted in an overextension of his forces and funds. In an effort to ensure that France’s historic enemy, Great Britain, could not seize New Orleans, Napoleon decided to sell Louisiana to the Americans. James Monroe had served in the Revolutionary War (1775–1783) and later studied law under Thomas Jefferson. As a Jefferson ally with pro-French sympathies, Monroe was appointed minister plenipotentiary and sent to join Livingston in France in 1803. His instructions were to offer $10 million for the sale of New Orleans and East and West Florida. If that failed, Monroe was to negotiate a military alliance with Great Britain. Robert R. Livingston had served in both the pre- and post-Revolutionary War governments of the Colonies and the United States. He was appointed U.S. minister to France in 1801. When American shippers’ access to the Mississippi River was threatened, U.S. president Thomas Jefferson instructed Livingston to see if France would sell New Orleans. But France was not interested in Livingston’s proposal. Charles Maurice de Talleyrand Perigord’s support of Napoleon in the years after the French Revolution earned him an appointment as France’s foreign minister in 1799. Talleyrand developed a reputation for being a skilled and crafty diplomat. By mid-April 1803, the French did not have the means to invest in a North American empire, so Talleyrand surprised Livingston by asking how much the United States would offer for all of Louisiana. When France proposed selling the entire territory of Louisiana, Livingston and Monroe moved quickly to seal the deal. Within two weeks, the two Americans and Francois Barbe-Marbois, the French secretary of the treasury, agreed on the terms: $11,250,000 as payment for Louisiana and $3,750,000 as a settlement against claims made by the citizens of Louisiana against the French government. Barbe-Marbois later wrote a book about the Louisiana cession.