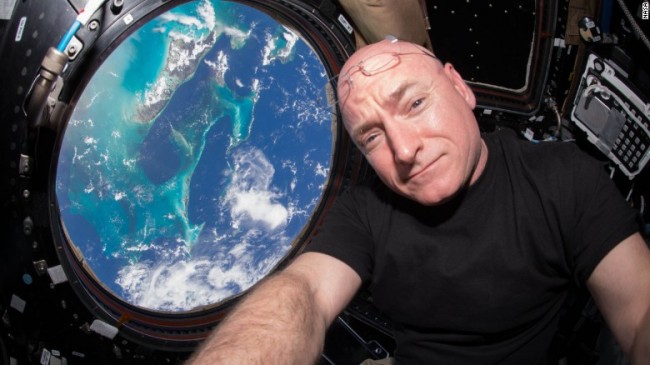 Everyone at Ask is very excited to celebrate the safe return of twin astronaut Scott Kelly after a record-setting 340 days in space! We’re also, frankly, relieved—since we’re featuring Scott and his twin brother Mark, also an astronaut, in our March issue, all about Twins. When we planned the story, we knew Scott was due to return in March. But we also knew that by the time he actually landed, the magazine would be done, printed, and in the hands of readers. So if anything changed, it would be too late to adjust our story. But all went smoothly and Scott and his Russian companion Mikhail Kornienko are home safe. Hooray!

During his year in space, Scott did many fun experiments—and he was himself an experiment, the first ever astronaut twin study. Scientists and NASA are keen to know—how will spending a year in space change Scott compared to his identical twin astronaut brother who stayed on earth? Over the past year, Scott and Mark have been intensively monitored, tested, sampled, and compared. NASA is hopeful that having an identical twin control will help them build a better picture of how space living affects health—something that is often difficult to pin down amid the naturally different health and genetics of different astronauts.

DNA is what makes the Kelly’s such interesting research subjects, and it’s also what got us into Twins. Kids are very curious about DNA. They hear the word all over, connected somehow to solving crimes, and evolution, and who you are, and curing diseases. But what is it, exactly? I hope we’ve managed to explain it at least a little in this issue. It’s what makes identical twins identical, and also (in epigenetic variations) what makes identical twins always a bit different. Researchers expect that after a year of intense stress, limited food, and extra radiation, Scott’s DNA will be even more different from Mark’s than it was when he went up. We should know more when all the analysis is done, in about 9 months from now. Stay tuned!

But in the meantime, one thing I’ve learned from watching Scott’s video updates and amazing photos (he is a great photographer!) is that if there’s one place I’d rather be than editing Ask, it’s up in space watching the aurora from 250 miles up. 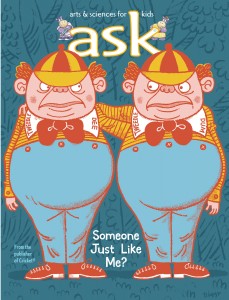 The amazing astronauts and twin brothers, Scott and Mark Kelly, are featured in the March issue of Ask Magazine.

Liz Huyuk is the editor of Ask Magazine.