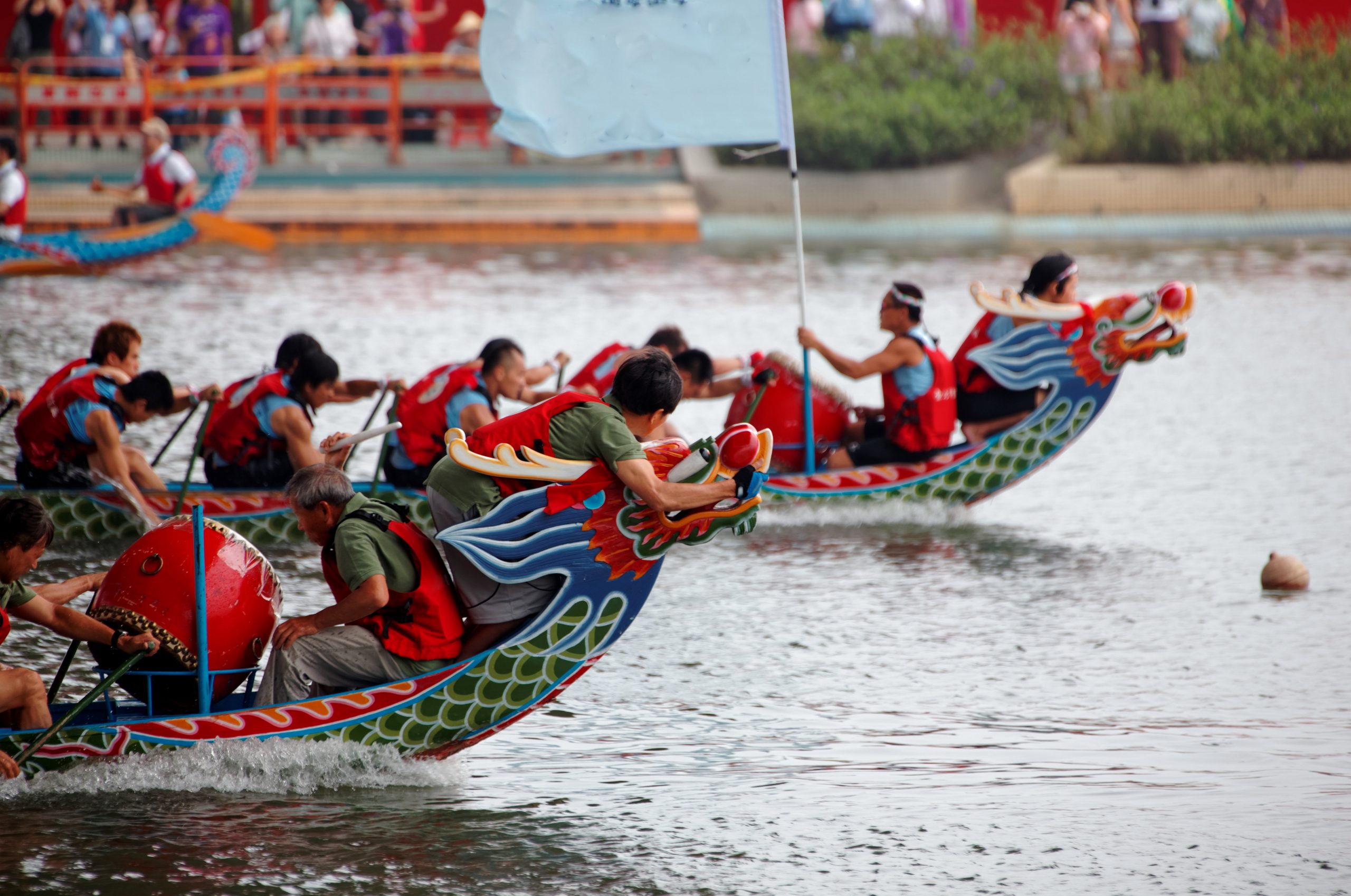 It might be the coolest holiday that you’ve never heard of. Or maybe it’s a major event that your family looks forward to each year. Either way, the Dragon Boat Festival is a time-honored Chinese tradition that’s made a major splash– literally– across the USA. It’s often called the fastest-growing water sport in the country!

The holiday involves teams of people racing long wooden boats decorated with dragons in local rivers, drumming, and delicious sticky rice balls! It’s been a national holiday in China since 2004, but was celebrated long, long before that.

How did it get started?

Nobody is sure how the Dragon Boat Festival started. Different regions of China share different legends and accounts of how the tradition began. Some say dragon boat races started as a military exercise. Some say it began as an ancient tradition in which people asked dragons to watch over their rice crops in a legendarily ‘unlucky’ time of year (the 5th day of a 5th month was considered to be bad luck). Other tales say it commemorated various different people who drowned in the river.

But the most famous story behind the Dragon Boat Festival involves a famous poet and politician named Qu Yuan. A highly influential official in the Chu administration, he advised the emperor to form an alliance with the state of Qin, which was growing extremely powerful and might conquer the Chu. The emperor found this suspicious and exiled Qu Yuan. Unfortunately, the emperor realized his mistake too late. The Qin conquered the Chu state and Qu Yuan drowned himself in despair. According to some legends, people rowed out in boats to try to save him. Some say they dropped food into the river so the fish would eat them and not Qu Yuan’s body. Others say that Qu Yuan became a river spirit and people left food offerings to him, but water dragons always got them first. Either way, this started the tradition of making sticky rice balls for the festival!

In China, the Dragon Boat Festival takes place on the (unlucky) 5th day of the 5th month on the Chinese calendar. In 2022, people in China and around the world celebrated on June 3rd. That said, American dragon boat races don’t always take place on the same day– some occur later in the summer. You might still have a chance of attending a Dragon Boat Festival this summer, and they all feature their own local traditions! Let’s explore some of the exciting festivals around the country.

The Boston festival was the first Dragon Boat Festival celebrated in the USA, and it’s still one of the biggest! It commemorated its 43rd anniversary this year. Over 20,000 people turned out on the Charles River on June 12 to watch 48 teams of racers. In addition to racing, the crowds enjoyed traditional performing arts like Chinese classical music, martial arts displays, Taiko drumming, and dance ensembles from a variety of Asian cultures. Plus, kids tried their hands at arts and crafts like paper lanterns and calligraphy!

Now here’s one you can still visit! The Chicago International Dragon Boat Festival takes place on July 30th this year! Rather than racing down a river, this 9th annual festival takes place on Busse Lake in the Ned Brown Preserve. Why is it called an “international” festival? Canadian teams compete alongside Americans in this popular race! Festivities include a “health and wellness village” and a “festival village.”

This isn’t the only Dragon Boat Festival in Chicago! The Chicago Chinatown Dragon Boat Race occurs on Saturday, June 25th at Ping Tom Memorial Park on the Chicago River. It supports a good cause, too: literacy! Ever since the year 2000, In 2019, 34 teams competed. Proceeds of the race support schools around Chinatown, buying books for students and funding literacy programs. We look forward to seeing what the 2022 race is like!

Watch out for dragons sailing through Sloans Lake Park in Denver! The Colorado Dragon Boat Festival will take place on July 23 and 24! With over 150,000 attendees and 180 vendors and performers, this festival is a big deal. In fact, it may be the largest in the USA. Festivities include the Colorado Dragon Boat Film Festival, the only all-Asian film festival in Colorado, and live performances on 3 different festival stages. One stage features local bands, one showcases Asian-American performing arts (including an Indian dance troupe and K-Pop cover group), and a third is reserved for awesome martial arts demonstrations!

Twelve teams competed in the Kansas City Dragon Boat Festival on Brush Creek this June 12! Xi’an, China is one of Kansas City’s Sister Cities, and Chinese and Asian-American culture is on full display here. Local children performed traditional dances and food trucks served up Hawaiian food during the race. The festival is sponsored by Kansas City’s Society for Friendship with China, and the dragon boats themselves were gifts from China!

If you fancy visiting a Dragon Boat Festival but don’t have any free time this summer, the Miami festival is perfect for you. It’s not happening until October 29! Proceeds will help support Save Our Sisters, an organization that introduces breast cancer survivors to dragon boat racing. Even if October is still hot in Miami, guests can enjoy a beer garden as well as a food truck bazaar and cultural expo.

Some say New York is the cultural capital of America. Whether or not that’s true, it’s hard to imagine they wouldn’t have their own Dragon Boat Festival. The Hong Kong Dragon Boat Festival in New York began in 1990 and is still running in Flushing, Queens! This year’s race will take place on July 30-31. International coaches will run a special clinic for competitors in the weeks leading up to it. Performers include a steel orchestra, the Chinese Music Ensemble of New York, the Shaolin Temple Kung Fu Association, a wandering storyteller, and more!

Ever since 1989, dragon boats have raced down the Williamette River in Portland as part of the city’s epic Rose Festival. Over 60 teams participated in this year’s race on June 11 and 12! From parades to garden shows to street festivals, the Rose Festival is one of Portland’s biggest events, and the dragon boat race plays a major part. Couldn’t make it this year? Portland holds another dragon boat race this September 10th and 11th! The two races are sponsored by different local organizations.

The 19th annual Washington DC Dragon Boat Festival took place on May 21 this year. 33 teams raced along the Potomac waterfront in the nation’s capital! With ceremonies including an “eye-dotting ceremony” to awaken the dragons and a traditional lion dance, the race was as much an opportunity for cultural education as friendly competition. The festival capped off the city’s Asian and Pacific Islander Heritage month celebrations, which included a street fair, museum exhibits, free concerts and movie screenings, and even free cooking lessons held at the US Botanic Gardens!

Have you ever attended a Dragon Boat Festival in your own city? Have a favorite not on this list? Tell us about it!