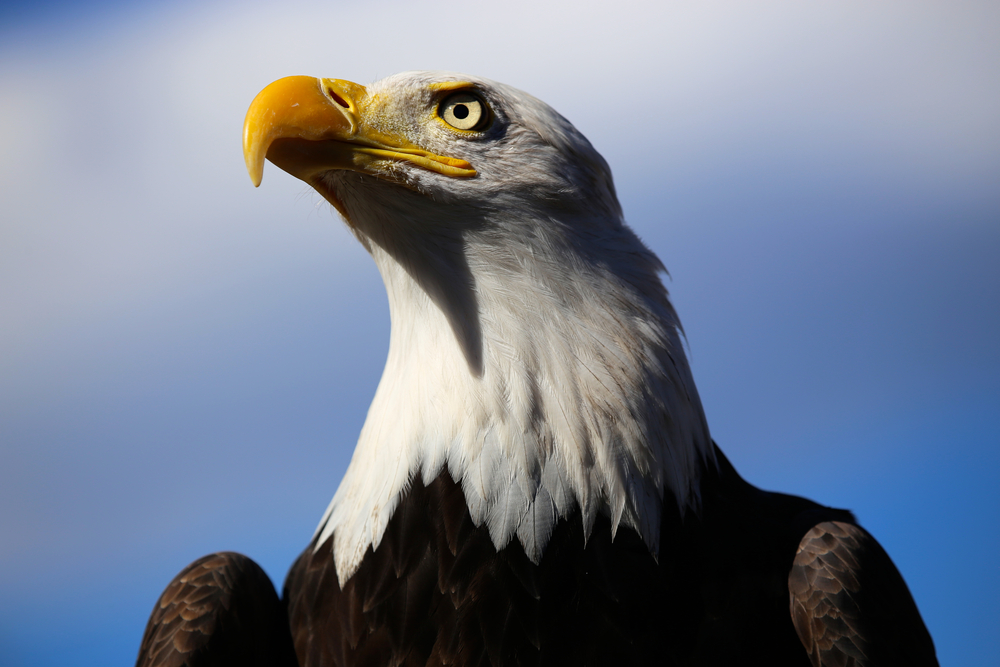 The Surprising Stories Behind Our National Symbols

The summer is a big time of year to see national symbols on display. Between Memorial Day, Flag Day, Independence Day, and Labor Day, you’re sure to see plenty of stars, stripes, eagles, Uncle Sam posters, Lady Liberty, and even more. But have you ever stopped to wonder how those symbols came to represent the USA? Here are some of the surprising– and occasionally controversial– stories behind them, pulled from this month’s issue of COBBLESTONE Magazine!

The earliest versions of the flag were all over the place. In 1777, Congress decided on a flag design together, consisting of “thirteen stripes, alternate red and white: that the union be thirteen
stars, white in a blue field, representing a new constellation.” (Have you ever thought of our states as a constellation before?) But you’ll notice they left a few details out. They never specified whether the stripes would be vertical or horizontal. And they never said how the stars would be arranged or what the stars would look like. Official flags from the 18th century included stars with five, six, seven, and even eight points!

As the USA began adding more states, the number of stars and stripes grew, too. When it finally got to 19 states in 1818, President James Monroe decided to stop things before the number of stripes got too busy and hard on the eyes. It was decreed that the flag would have only 13 stripes but a number of stars corresponding to the current number of states. This meant an ever-changing flag. Imagine going to work at the flag factory and hearing, “New state just dropped– we have to scrap the 40 flags we already made this morning!” In 1959, Alaska and Hawaii became the USA’s 49th and 50th states. President Dwight D. Eisenhower signed an executive order to standardize the version of the flag we recognize today. This is the longest-lasting version of the flag in American history. Do you think it will ever change again?

How did the bald eagle become our national bird? It all came from its famous appearance on the country’s Great Seal. You’ll see it on our money, national buildings, official government documents, and more. Charles Thomson, Secretary of the Continental Congress, pulled together a design for the seal in 1782 after three different committees failed to come up with a good design. Rejected designs included biblical scenes, Hercules, and personifications of war and peace holding a shield together. Thomson took inspiration from previous drafts, including the eagle that William Barton had included in his. it was Thomson’s bright idea to change the eagle to a bald eagle, a bird native to America! Here’s what Thomson’s original design looked like:

Benjamin Franklin later said in a letter to his daughter that he felt the bald eagle was not a great representative of the country, being a bird of “bad moral character” and that a turkey was a “much more respectable Bird,” indeed a “bird of courage.” He was probably joking, riffing on the idea that some people thought the seal of the Society of the Cincinnati (based on the Great Seal) looked more like a turkey than eagle. Still, the idea of the turkey as Franklin’s alternate idea for a national bird has persisted– and it’s too good a story to ignore.

Certain words and phrases appear on all coins

Congress has specified that all US coins must include the words “liberty” and “in God we trust” on one side and “E. pluribus unum” and “United States of America” on the other side. Did you ever notice that the same words show up on all of the coins? The back of our coins also feature certain national symbols and monuments. You’ll find the eagle on a quarter and an olive branch, torch, and oak branch on the dime. The penny features the Lincoln Memorial (remember who’s on the front?), and the flip-side of the nickel is Monticello, Thomas Jefferson’s home.

Uncle Sam was based on TWO real people

A real man from New York who worked in the meatpacking business was the original ‘Uncle Sam.’ His name was Samuel Wilson and he provided barrels of meat to U.S. soldiers during the War of 1812. Because the barrels were stamped with ‘U.S.,’ people joked that it stood for Uncle Sam. If the name Samuel Wilson sounds familiar, it’s also the name of the Marvel superhero Falcon, who later took up the title of Captain America. We wonder if he was named after ‘Uncle Sam’ on purpose.

As for the famous tall, thin Uncle Sam of cartoon fame– you know the one, wearing a top hat, beard, and a red, white, and blue suit– his appearance was based on a different real person. Artist J.M. Flagg drew the famous “I want you for U. S. Army!” posters during World War I. Who was his model for Uncle Sam? Himself! He probably had no idea that his own appearance would be linked to one of our unofficial national symbols over a century later.

What’s our national motto? You might not always get the same answer.

Our official national motto is “In God We Trust,” which first started showing up on money during the time of the Civil War. Congress officially enshrined it as the motto in 1956. But there’s another phrase on our money that was the unofficial national motto for over 170 years. It’s E. pluribus unum, meaning “Out of many, one” in Latin. It’s a beautiful statement, both about the original colonies coming together and the many cultures that make up the nation. Still, we can see why it waned in favor during the Civil War– it’s hard to say “out of many, one” when you’re temporarily split into two countries.

The USA has an official tree, flower, and mammal

Most people can name our national bird, but did you know we also have a national mammal? It’s understandable if you didn’t know– it only officially earned that title in 2016. The American bison is our national mammal! It’s the biggest land animal in the USA and a bit of a conservation success story, having been brought back from the brink of extinction just like the bald eagle. You may have heard of the White House’s rose garden, but did you know that the rose became our national flower in 1986?

We also have a national tree, determined in 2004: the oak! Oaks are the most common and widespread tree in the USA. Unlike most of our other national symbols, oaks were chosen by a democratic vote. Over 101,000 people voted for the mighty oak. The second place finisher was the redwood, coming in with 81,00 votes.

You may know that the words to our national anthem, “The Star-Spangled Banner,” were written by Francis Scott Key. But why don’t we ever talk about who composed the tune? There’s a good reason for that. Key’s poem was set to an English drinking song. The song, “To Anacreon in Heaven,” was sung by the members of The Anacreontic Society, a gentleman’s club named after an Ancient Greek poet who wrote his own drinking songs and famously loved wine.

It’s a pretty big leap from a song representing a social club to a song representing a country, but it’s pretty fun that our national anthem used a British tune to tell the story of our American flag surviving a British attack. You can see the actual “star-spangled banner” referenced in Key’s lyrics at the National Museum of American History in Washington, DC.

The Statue of Liberty was presented to the USA in 1885 as a symbol of the long friendship between France and America, dating back to the American Revolution. French sculptor Frédéric Auguste Bartholdi created the impressive statue, at the time the largest in the world. An impressive framework of metal supports the structure, courtesy of Alexandre Gustave Eiffel, who would later go on to design the Eiffel Tower! The Statue of Liberty was too big to ship across the ocean. They had to take it apart and ship it in 14 separate boxes! We can only imagine how Bartholdi must have felt seeing it all dismantled.

Are any of these fun facts news to you? You can read more about these symbols and many more in the July/August issue of COBBLESTONE Magazine!