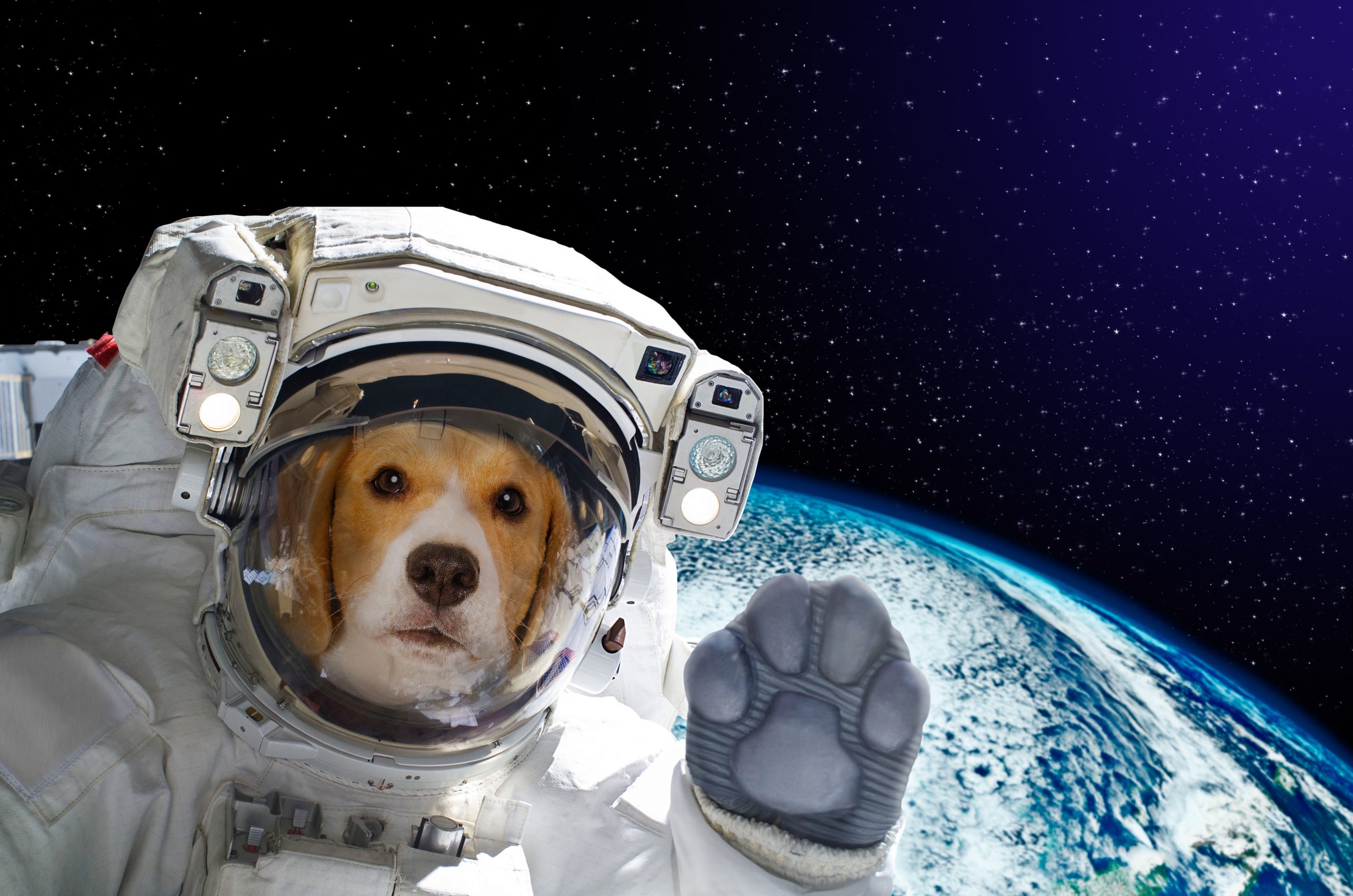 August 26 was International Dog Day, a holiday to celebrate man’s best friend. Humans and dogs have shared a bond for over 16,000 years. Our furry friends are more than just pets to us: they help rescue people, take care of farm animals, and much more. All dog lovers believe that their pets are amazing, but here’s our guide to some of the most extraordinary dogs in history!

We can all name famous human astronauts, but did you know that over 20 dogs have been to outer space? During the ‘Space Race’ of the 1950’s and 60’s, scientists from the Soviet Union used dogs as test subjects to pioneer space travel. The first pooches to exit the Earth were Tsygan and Dezik, in 1951. This journey, which returned home safely, was what we call a ‘suborbital flight.’ That means that although it traveled into space, it didn’t enter orbit but stayed at the border of the atmosphere. Entering orbit was a lot trickier.

The famous cosmodog Laika entered orbit on the Sputnik-2 mission in 1957. Sadly, she did not survive the mission—and she wasn’t expected to. She was only given enough oxygen for nine days and likely didn’t even make it that long due to extreme heat. Although she never asked to be a hero, Laika has been honored with stamps, a statue, museum exhibits, and much more. And two other dogs, Belka and Strelka, later made a triumphant return from an orbital adventure. President John F. Kennedy even received one of Strelka’s puppies as a gift (read more about presidential dogs later). Strelka’s great-great-grandpuppies are still alive today. The space dogs proved that humans could indeed survive in space. Now that’s one cool trick that even that even the best-trained dogs can’t do!

An article about animal astronauts, including Laika, Balka, and Strelka, appeared in the “Bodies In Space” issue of MUSE Magazine earlier this year!

One of the most decorated soldiers of World War II was a mutt named Chips. Once an ordinary pet, his owner donated him to the war effort to be trained as a sentry dog. During his career, he traveled the world, accompanying soldiers in Germany, Italy, France, and even Africa.

His most amazing accomplishments occurred during the invasion of Sicily. When four gunners in a bunker (called a ‘pillbox’) trapped Chips and his handler, the brave dog left his handler’s side and attacked the gunners. Although he was injured in the process, the four soldiers surrendered and Chips went on to help take ten more prisoners later that day! He was awarded the Purple Heart, Distinguished Service Cross, and Silver Star (although the Army took those awards back, claiming it was against policy to decorate an animal). After the war, Chips returned home to his beloved owner! Chips’ story was even made into a Disney movie.

Chips wasn’t the only famous war dog. World War I’s most decorated dog was an unassumingly adorable little Boston Bull Terrier named Stubby. He didn’t exactly sign up for military service. The stray dog was found hanging around the Yale University campus, where infantry troops were training, and the men took a liking to him. When they shipped out to France for battle, the men smuggled Stubby onto their ship. Although a commanding officer was angry to discover the furry stowaway, Stubby was allowed to stay after politely saluting.

He took part in 17 battles over 8 months in the trenches and even captured a German spy. Stubby suffered many injuries, including grenade wounds to the legs and chest, and endured a mustard gas attack (later causing the soldiers to make him a special doggy gas mask), but he returned home a hero. Now known as ‘Sergeant Stubby,’ he led many victory parades, met three U.S. Presidents, was awarded many medals, and even became the mascot of Georgetown University. When he died, he was honored with a half-page obituary in the New York Times. His preserved remains can be seen at the Smithsonian Institution’s Museum of American History.

Speaking of dogs in the Smithsonian, another beloved stuffed dog can be found at the National Postal Museum. Like Stubby, Owney was a friendly stray dog who became a famous mascot. Although movies depict dogs and mailmen as natural enemies, Owney proved that’s not always the case. Whether it was the rich smell of the leather or the pleasant texture, Owney loved mailbags and followed them around whenever he could. First, he followed mailbags onto postal wagons. Then, he started boarding mail trains! Owney’s railway journeys took him all over the country… then the world! He loyally protected his beloved mail bags on trains and steam ships to Europe and Asia.

Rather than regarding him a nuisance, postal workers considered him a good luck charm– although mail trains often suffered crashes, Owney’s journeys always arrived safely. Soon, mail clerks started pinning medals to Owney’s collar to mark each new location he visited. When they ran out of room on the collar, he graduated to wearing a little vest. One writer who met the dog said of his medals, “When he jogs along, they jungle like the bells on a junk wagon.” Although Owney was sadly shot in Toledo due to misbehavior, fond mail men raised the money to have him preserved through taxidermy. You can visit Owney and 372 of his medals in Washington, DC!

Although the Smithsonian displays two amazing dogs, the most famous dogs in DC are always those who live at the White House! Of the 45 U.S. Presidents, 30 have kept dogs, from George Washington’s 50+ hunting dogs to Barack Obama’s Portuguese Water Dogs, Sunny and Bo. Warren G. Harding’s Airedale, Laddie Boy, became the first Presidential dog to gain celebrity status. Harding may not have been a great President, but by all accounts, Laddie Boy was a very good boy. He sat in his own special chair during cabinet meetings, newspapers published ‘interviews’ with him, and local dogs were invited to his birthday parties on the White House lawn. Laddie Boy’s bond with the President was so close that he reportedly howled for three days straight before Harding’s death.

Franklin Delano Roosevelt’s fluffy Scottish terrier, Fala, has been immortalized as a statue at the FDR Memorial. As for Theodore Roosevelt, his bull terrier, Pete, once famously chased a French ambassador up a tree! One of the most famous presidential dogs, Checkers Nixon, never even lived in the White House. Back when Nixon was a U.S. Senator, he was accused of taking inappropriate gifts, among other unethical accusations. In his famous ‘Checkers speech,’ Nixon said that no matter what, he was keeping one campaign gift: a cocker spaniel puppy named Checkers that his daughters loved.

George H.W. Bush’s dog, Millie, was famous for another reason: she was the first ‘First Dog’ to “write” a New York Times Best Seller! Millie’s Book: As Dictated to Barbara Bush gave a dog’s-eye view of the White House. There’s even a dog park named for Millie Bush in Houston! Another Bush family dog recently went viral when an old memo from the President came to light, warning staffers not to feed their overweight pooch, Ranger! Dwight D. Eisenhower’s Weimaraner, Heidi, also made an appearance in a recent issue of COBBLESTONE Magazine!

You’ve heard of politicians’ dogs, but what about dog politicians? Sunol, California is a small town with a population under 1,000 and one special claim to fame. In 1981, three candidates ran for the position of ‘honorary mayor,’ which had no real political responsibilities besides leading a town parade. Two of the candidates were humans. The third was a black Lab named Bosco. Guess who won? Joke candidate Bosco ran under the “Re-pup-lican” party with the catchy slogan, “A bone in every dish, a cat in every tree, and a fire hydrant on every corner.” Bosco held the title until he passed away in 1994. He even became the center of a political controversy when a Chinese propaganda newspaper used him as an example that democracy doesn’t work– and treats people and dogs alike. In response to that criticism, Bosco appeared at a rally in favor of democracy in San Francisco!

Today, his memory lives on in Sunol. There’s a local pub named after him (featuring a stuffed replica of Bosco), souvenir t-shirts, and even a bronze statue downtown. Even though his campaign was merely a friendly joke, Bosco’s lasting legacy proves that you should never underestimate a dog!

You may not have heard of the other dogs on this list, but odds are, you’ve heard Balto’s name before. He was even the hero of an animated movie starring Kevin Bacon! But Balto’s true story is just as amazing as fiction. An accomplished sled dog, Balto led a team of dogs on the final leg of a journey to save children’s lives. The isolated town of Nome, Alaska was in danger of suffering a diphtheria epidemic. Nowadays, most people are vaccinated for diphtheria, a deadly disease that can cause trouble breathing, paralysis, and heart problems. In 1925, the closest serum that could fight diphtheria was located in Anchorage, 537 miles away, and the airplane set to transport it was frozen. Instead, a series of dog teams transported the medicine safely to Nome, running on hazardous trails, in heavy snow and total darkness.

A sculpture of Balto stands in Central Park in New York, celebrating his “Endurance, Fidelity, Intelligence.” Balto spent his later years in Cleveland, Ohio, where he was welcomed with a parade! He spent several years living in the Cleveland Metroparks Zoo, and his stuffed remains still exist in the Cleveland Museum of Natural History.

Dogs have been an important part of our world for thousands of years, so it’s no wonder that they often make appearances in our award-winning children’s magazines! Here are a few of our dog-themed issues for all ages and interests!

CLICK Magazine’s “Good Dog” issue features dog heroes, including Balto! It also answers all of the questions that curious young readers ages 3-6 may have about their favorite pets.

FACES Magazine published a “World of Dogs” issue in 1610, featuring dogs around the world (including some more canine celebrities that this article missed!) FACES is a magazine for readers ages 9-12, highlighting people, places, and cultures around the globe.

The “Pets On The Mind” issue of MUSE Magazine explores the fascinating topic of pet psychology. MUSE, a STEM Magazine for ages 9-12, tackles the cutting-edge and quirky aspects of science that kids don’t necessarily learn in school.